It was the end of an era Tuesday night at the Barretts auction in southern California as the last of the late Prince Ahmed bin Salman's Thoroughbred Corporation horses were dispersed. A total of 52 horses were sold, mostly horses of racing age, with the top price of $1,350,000 going for recent grade 2 stakes winner Cat Fighter. The 4-year-old filly, who won the La Canada Stakes (G2) last out, was purchased by Hill 'n' Dale Farm owner John Sikura in partnership with Richard and Audrey Haisfield who recently purchased a farm in Kentucky.

Sikura was surprised to get her that cheap. He said, "I thought she was a $2-million-plus filly, and I didn't expect to be able to buy her. She's a well-credentialed filly, and she's well-bred. She had a great performance in her last start, and she's on top of her game." Cat Fighter will remain in training with Bob Baffert.

The Haisfield's also purchased the $700,000 second highest priced horse, 4-year-old filly Atlantic Ocean, for their Never Tell Farm along with the Tale of the Cat filly Honest Answer for $510,000. They plan to put together a band of 10-12 quality broodmares for their farm. Atlantic Ocean was bought by Thoroughbred Corp. for $1.9 million in the 2002 Barretts March 2-year-olds in training sale, setting a record for a juvenile filly sold at auction. She has so far earned $678,210, winning 5 of her 19 career starts.

Following the dispersal was a 2-year-old in training sale where hip #81, a filly by Awesome Again out of a Saratoga Six mare, broke Atlantic Ocean's record sale price when she was purchased for $2,000,000 by John Ferguson Bloodstock. Overall, 79 juveniles were sold for a total of $13,728,000, an average of $173,772 each. Full results for the sale can be found on the Barretts website.

The 52 horses brought a total of $6,453,200, an average of $124,100 each. Trainer Kristin Mulhall, daughter of Thoroughbred Corp.'s top advisor Richard Mulhall served as the consignor for the sale. She said, "It all has to end sometime, but I'm happy because everybody sold well. They all sold for about what I thought they would."

Full results for the sale can be found on the Barretts website and past performances for all the horses are also available.

Below are a few of the famous faces seen at the sale. 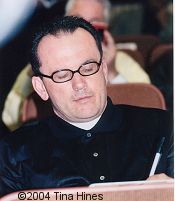 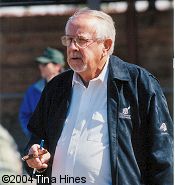 Horse and track owner R.D. Hubbard checks out the horses at the sale. 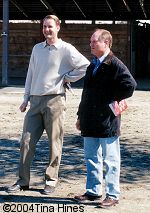 California trainers Richard Mandella (right) and his son Gary look for fresh talent at the sale. 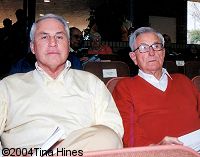 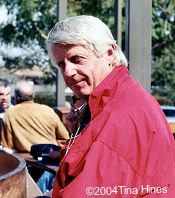 Trainer John Ward, who won the Kentucky Derby with Monarchos, checks out the horses at the sale.