The highlight race of the Santa Anita fall meeting is the $300,000 Awesome Again Stakes (G1), featuring the best older horses of the west coast going 1 1/8 miles on the main track, and is a Breeders' Cup Challenge "Win and You're In" qualifier for the Classic. Just 13,537 fans came to the Arcadia oval on Saturday afternoon under sunny skies and temperatures in the low 100's. Bayern was sent off as the 6-5 favorite despite being winless since last year's Classic (G1) and 9th in the Pacific Classic (G1) last out. In to challenge him included 3-1 Hoppertunity, fourth in both the Pacific Classic and San Diego Handicap (G2), and 11-2 Smooth Roller, fourth in the Harry Brubaker last out.

Jockey Martin Garcia sent Bayern to the lead first time by through fractions of 24.30, 48.64, and 1:12.25 while pressed by Smooth Roller and stalked by Hoppertunity. At the 3/16 pole Smooth Roller easily gained the lead through 1 mile in 1:36.04, and drew off through the stretch to win by 5 1/4 lengths over Hoppertunity in 1:48.08 over the fast main track. It was another 1 1/2 lengths back to Bayern third. 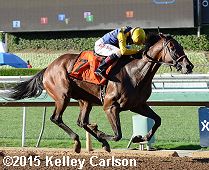 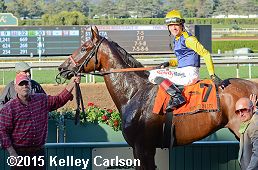 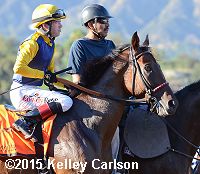 Left: Smooth Roller in the winner's circle. Winning trainer Victor Garcia said, "I expected him to run big. He had a lot of trouble in his last race. He was washed out, stumbled from the gate, was four or five wide both turns and only got beat 1 1/4 lengths. I worked the horse twice and he worked real good. Tyler was real happy with it. We'll go to the Breeders' Cup (Classic), absolutely. I thought we had a good shot in the race, but the only way to find out is to run with the big boys, and the horse ran like I expected."

Right: Smooth Roller in the post parade. Winning jockey Tyler Baze said, "He's turned into a monster work horse in the morning; he really wants to do it. Last week, Victor called and told me to go 7/8 in 1:28. I breezed him in 1:25. I called him and told him ‘that's as easy as he wants to go and he did it the right way.' I told him to dress up for Saturday because I'm expecting him to run big and he did." 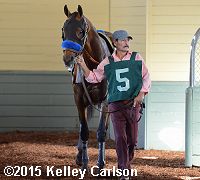 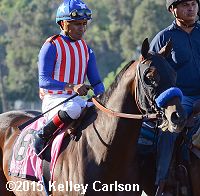 Left: Second place finisher Hoppertunity in the paddock before the race. Jockey Mike Smith said, "We ran a good race, but I just couldn't catch the winner. The game plan going in was pretty much what happened. I thought I'd be laying third and he was. He was laying a comfortable third. Hard Aces was coming a little early on the backside, so it turned it into a long run. But he was able to gather himself up and secure second anyway. That's pretty much it."

Right: Third place finisher and beaten favorite Bayern in the post parade. Jockey Martin Garcia said, "He looked like he was going nice and easy but he didn't want to run. If he was the same (as he was last year), he would have won. Too quiet; he didn't show anything." Owner Kaleem Shah retired him after the race. He said, "Bayern has given my family memories of a lifetime and I am grateful for that." He will stand at stud next year at Hill 'N' Dale Farm in Kentucky. 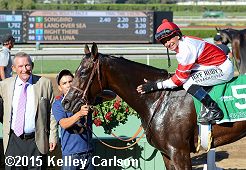 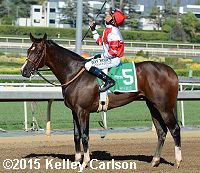 Left: Songbird in the winner's circle. Winning jockey Mike Smith said, "It lived up to the expectations. She opens that stride up and she has such a high cruising speed. There are so many horses with that kind of ability but a lot can get to them. She's so intelligent, she's so smart and listens to everything I tell her. I got her to fall asleep there on the lead but she fell asleep too much! I had to wake her up a little bit at the 1/8 pole but after that she jumped back into the bridle and it was over."

Right: Jockey Mike Smith celebrates aboard Songbird after the race. Dan Ward, assistant to trainer Jerry Hollendorfer said, "It was very exciting. It was just what we wanted. She showed she can go two turns and now we've got five weeks (until the Breeders' Cup)." 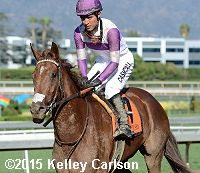 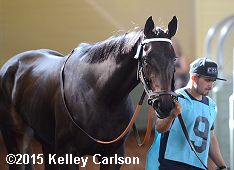 Left: Second place finisher Land Over Sea returns after the race. Jockey Mario Gutierrez said, "I wasn't going to make much ground on her. Mike Smith has a really talented filly, and with them being able to get that type of easy lead, I knew it was going to be tough for me to cut it. But I like my chances in the Breeders' Cup. My filly runs from behind, so I really like our chances. She got the distance – we know now she can run 1 1/16. I think we're good. I couldn't ask for more."

Right: Third place finisher Right There in the paddock. The 25-1 shot was last early under Kent Desormeaux then passed tired horses to get third beaten 14 1/4 lengths. The Keith Desormeaux trainee improved her record to 1 win, 1 second, and 1 third in 5 starts earning $152,200 for owner Big Chief Racing.

The first graded stakes of the day was the $300,000 FrontRunner Stakes (G1) for 2-year-olds going 1 1/16 miles looking for automatic entry into the Breeders' Cup Juvenile. Best Pal (G2) and Del Mar Futurity (G1) winner Nyquist was the 1-2 favorite over 5-1 Mt Veeder, winner of the Contender Stakes at Los Alamitos, and 7-1 Hollywood Don, winner of the Del Mar Juvenile Turf. 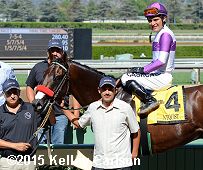 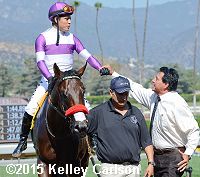 Left: Nyquist in the winner's circle. Winning trainer Doug O'Neill said, "That stretch run was probably a treadmill test for the cardiologist. I guess I'm OK, but that was truly so exciting, but when you're (odds-on), you're thinking you're going to win by 5 geared down, the jockey looking under his arm, all that stuff. This one, Mario really had to ride a smart race after the way it started and through the stretch. He did a great job."

Right: Nyquist returns after the race. Winning jockey Mario Gutierrez said, "I was expecting him to be easier but he was tough, he was in the bridle. I adjusted though and it worked out in the end. It was good to have an exciting finish to make the race exciting. Nyquist likes to fight, he doesn't like anybody to pass him and that's a good thing. He has a good mentality and I think that's why he stays undefeated." 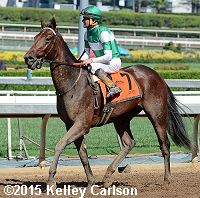 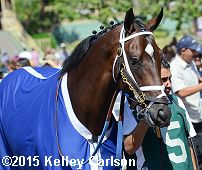 Left: Second place finisher Swipe returns after the race. Trainer Keith Desormeaux said, "I thought he moved forwardly today. I told Kent to unsaddle him (during the inquiry) because it's hot out here and he ran hard. There wasn't enough banging or interference to cause a disqualification. He's danced every dance. We'll take a good luck at him and make sure he's all right and we'll look at the Breeders' Cup. This is what we all live for, right?"