The last Grade 1 of the New York racing season is the $753,750 Cigar Mile Handicap (G1), traditionally run on the Saturday after Thanksgiving. This 1 mile trip around one turn of the Aqueduct main track often plays a role in deciding Eclipse Award champions in certain categories. Conditions were typical for late November, with overcast skies and temperatures in the mid 30's. 2013 Breeders' Cup Sprint (G1) winner Secret Circle was sent off as the 5-2 favorite in the field of 9 off his close second in this year's renewal. In to chalenge him included 7-2 second choice Itsmyluckyday, winner of the Woodward (G1) but third in the Kelso Handicap (G2), and 4-1 third choice Vyjack, winner of the Kelso.

Jockey Martin Pedroza sent 9-2 fourth choice Private Zone to the lead exiting the chute and he set fractions of 22.18, 44.18, and 1:08.34 over the fast track while as many as 2 lengths in front of Secret Circle and 13-1 Regally Ready stalking him second and third. Entering the stretch, Private Zone pulled away from the rest of the field finishing up 5 lengths in front of Secret Circle in 1:34.39. It was just a neck back to late-running 6-1 Bourbon Courage third. 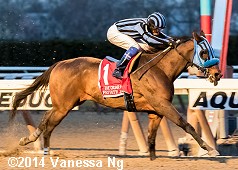 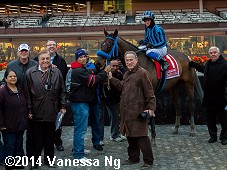 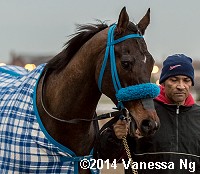 Left: Private Zone in the winner's circle. Winning trainer Alfredo Velazquez said, "That was the way I was expecting him to run because he was training super. I worked him here the other day, and it was the slowest track I have ever seen, and he worked 1:01 4/5. The fractions didn't bother me because he was doing it easy. When I saw :44 I said, 'They're going to have to come and get him.' The break was very important because of the track. Everything inside today was running."

Right: Private Zone heads back to the barn after the race. 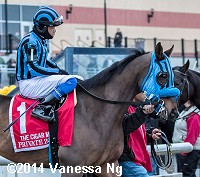 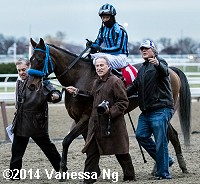 Left: Private Zone heads out for the post parade. Winning jockey Martin Pedroza said, "Unbelievable performance, I was expecting him to run good but not that good. I was able to get all the speed at once at the break. It was cold, I actually only jogged this horse and even in the Breeders' Cup I only jogged him. Today, I wanted him to run warm because it's cold. It was cold for the horse, it was cold for jockeys." 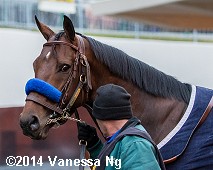 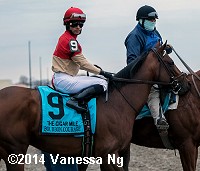 Left: Second place finisher and beaten favorite Secret Circle in the paddock. Jockey Joel Rosario said, "He ran great. When I came out of the gate, he kind of stumbled a little bit. But he recovered really quickly; he does everything so easily. I can't believe the horse on the lead just kept on going. I was trying to track him and stay with him, but he was in command the whole way."

Right: Third place finisher Bourbon Courage heads out for the post parade. The 6-1 shot sat 6 lengths off the pace in 5th early under Jose Lezcano then passed tired horses to get third beaten 5 1/4 lengths. The Kellyn Gorder trainee improved his record to 4 wins, 5 seconds, and 6 thirds in 21 starts, earning $1,115,877 for owner Bourbon Lane Stable.


Kicking off the Saturday stakes quartet, a field of 8 three-year-old fillies (6 betting interests) went to post in the $400,000 Comely Stakes (G3) at 1 1/8 miles on the main track. The three-horse entry of Indiana Oaks (G2) third place finisher Penwith, allowance winner Snowbell, and Tempted (G3) runner-up Divided Attention was sent off as the 9-5 favorite. In to challenge them incuded 2-1 second choice Dame Dorothy, winner of the Turnback the Alarm Handicap, and 3-1 third choice Catch My Drift, 7th in the Alabama (G1) and second in the Turnback the Alarm. 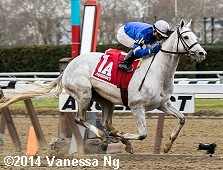 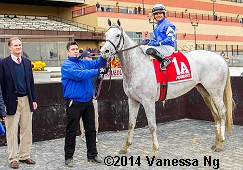 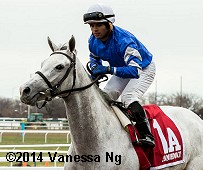 Left: Snowbell in the winner's circle. Jimmy Bell (far left), racing manager for winning owner Godolphin Racing said, "We were hopeful that we would be able to get the lead, just judging from the track it seemed like a good place to be - on the front end. She's a filly that has obviously shown that she has that front-running speed, which is always dangerous. The fractions were kind and every step was a good step."

Right: Snowbell returns after the race. Winning jockey Luis Saez said, "I know she likes the front, and the only other speed was part of the entry. I took the lead, and waited to see what would happen. At the half-mile, I knew I still had a lot of horse, and when I asked her in the stretch, she came on very well. That was good." 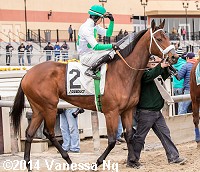 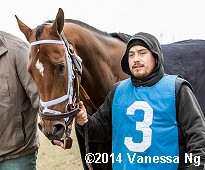 Left: Second place finisher Shayjolie heads out to the track before the race. The 30-1 longest shot stalked the pace in third 3 lengths off under Jose Ortiz then put in a mild rally to get second beaten 2 1/4 lengths. The Gary Contessa trainee improved her record to 2 wins, 4 seconds, and 0 thirds in 8 starts, earning $236,943 for owner Sean Shay.

Right: Third place finisher Dame Dorothy comes over from the barn before the race. The 2-1 second choice presseded the pace in second under Javier Castellano but was headed for place money in the final yards. The Todd Pletcher trainee improved her record to 4 wins and 1 third in 5 starts, earning $271,900 for owner Bobby Flay.


Immediately before the Cigar Mile, the $400,000 Remsen Stakes (G2) featured a field of 13 two-year-olds (12 betting interests) going 1 1/8 miles on the main track. Maiden winner Frosted was sent off as the 9-5 favorite over 9-2 Ostrolenka, winner of the Sleepy Hollow, and 5-1 Classy Class, a debut winner last out. 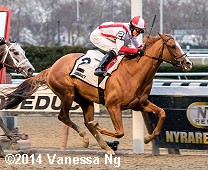 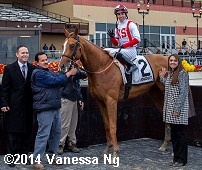 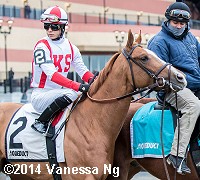 Left: Leave the Light On in the winner's circle. Winning trainer Chad Brown (far left) said, "Watching the card earlier, speed was very good, especially from the inside. This horse has speed, and on the stretch out, two turns, he's going to put himself on or near the lead. It's his first time on a dry track. We bought him with the two-turn dirt races in mind. If he's good enough, he'll get better as the distances go on. His owners have been looking for a Derby horse and they've been knocking on the door with a couple. I think they have a legitimate contender here. He's a very long-winded horse."

Right: Leave the Light On heads out for the post parade. Winning jockey Jose Ortiz said, "It was the perfect trip. The way the track is playing today helped me a lot. We broke good and the plan was to take the lead like Chad [Brown] told me. He was relaxed, I tried to slow him down as best I could, and when I asked him to go he was there. Perfect training by Chad Brown and his team." 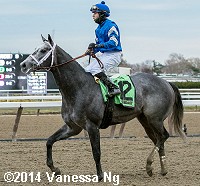 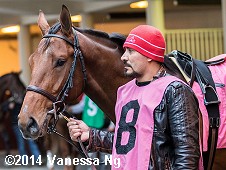 Left: Second place finisher and beaten favorite Frosted returns after the race. Trainer Kiaran McLaughlin said, "It was a very tough trip. He ran well; we're happy with his race, other than not winning. He was very wide on both turns because of his post position, and he ran a big race. He was just unlucky. He's a fun horse to have, and hopefully he'll have a bright future."

Right: Third place finisher Keen Ice in the paddock before the race. The 22-1 shot sat 10 lengths off the pace early under Israel Rodriguez, then rallied to get third beaten 8 1/2 lengths. The Dale Romans trainee improved his record to 1 win, 0 seconds, and 1 third in 4 starts, earning $78,875 for owner Donegal Racing.


The distaff counterpart to the Remsen is the $400,000 Demoiselle Stakes (G2) for 2-year-old fillies also going 1 1/8 miles. Spinaway (G1) winner and Frizette (G1) 4th place finisher Condo Commando was sent off as the 3-2 favorite in the field of 7 over 5-2 Angela Renee, 10th in the Breeders' Cup Juvenile Fillies (G1), and 3-1 Quezon, winner of the Maid of the Mist Stakes. 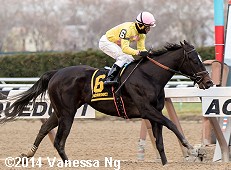 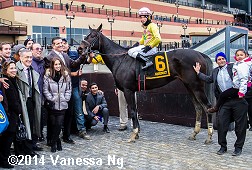 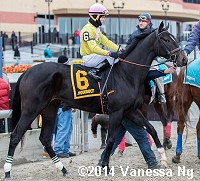 Left: Condo Commando in the winner's circle. Winning trainer Rudy Rodriguez said, "She likes to be a free-running horse. If you take hold of her, she will fight you. To see her galloping along on the lead like that, I was very confident. Today, she broke very well. I didn't think the distance was going to be a problem because we'd given her some longer works." Owner Michael Dubb added, "When you compare her fractions, her fractions were 2 to 3 seconds faster than the older fillies in the Comely, and she had no problem drawing away. We knew at Saratoga she is a special horse, and she is."

Right: Condo Commando heads out for the post parade. Winning jockey Joel Rosario said, "She went easy, I never really had to ask her to go at all. I didn't have to work hard to get to the lead and she was always comfortable. The horse was very relaxed and responsive, and anytime I asked her for more she was ready to go." 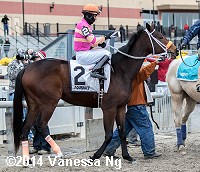 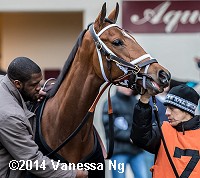 Left: Second place finisher Calamity Kate heads out to the post parade. The 13-1 shot stalked the pace third under Paco Lopez, lost contact with the pacesetter but won the battle for second. The Kelly Breen trainee improved her record to 1 win, 1 second, and 0 thirds in 5 starts, earning $128,068 for owners George and Lori Hall.

Right: Third place finisher Angela Renee in the paddock. The 5-2 second choice pressed the pace in second under Paco Lopez but faded in the stretch to finish third beaten 12 1/4 lengths. The Todd Pletcher trainee improved her record to 2 wins, 1 second, and 2 thirds in 6 starts, earning $340,000 for owner-breeder Siena Farm.