The $300,000 Del Mar Debutante Stakes (G1) on Saturday features the top 2-year-old fillies on the west coast sprinting 7 furlongs on the main track. Conditions were typical for the end of the Del Mar summer meeting, with clear skies and temperatures in the mid 70's. Inspiressa was sent off as the 7-5 favorite in the field of 8 off her debut win on August 11. In to challenge her included 11-4 second choice Bast, who finished 2nd to Inspiressa in the same debut race, and 4-1 third choice Leucothea, a maiden winner at second asking by 14 1/2 lengths on August 15.

13-2 Stellar Sound was quickest out of the chute through an opening quarter of 22.55 before Inspiressa took over through a half in 44.88. Turning for home, Bast, 4th early under Drayden Van Dyke, came out 4 wide and swept to the lead, opening up by 2 lengths through 3/4 in 1:10.57. Kept to task by Van Dyke but drifting inward, Bast drew off to win by 8 3/4 lengths in 1:23.73 over the fast track. It was half a length back from Inspiressa to late-running 25-1 Comical third. 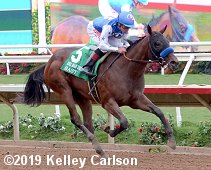 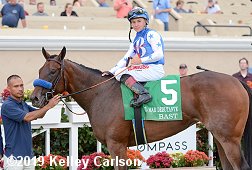 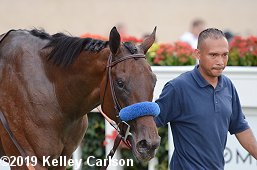 Left: Bast in the winner's circle. Winning trainer Bob Baffert said, "She needed the blinkers the first time, but I wanted to get a race in her before the Debutante. She came back after that race and worked so well I knew she was ready to go. The blinker is really minimal. We'll definitely look at the (Breeders' Cup Juvenile Fillies) and races like that down the road."

Right: Bast heads back to the barn. Winning jockey Drayden Van Dyke said, "I had a ton of horse all the way. She broke good and when they all rushed up there, I just took a hold and sat back. She was focused today. The addition of those blinkers helped. Good horsemanship by Bob (trainer Baffert). She was cruising at the end. Very impressive." 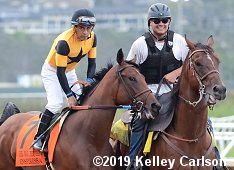 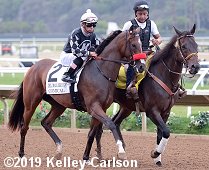 Right: Third place finisher Comical in the post parade. Jockey Norberto Arroyo Jr. said, "She gave it a good try. But her game will be two turns."


The $200,000 John C. Mabee Stakes (G2) featured a field of 10 older fillies and mares going 1 1/8 miles on the Jimmy Durante turf course. Vasilika was sent off as the even-money favorite. In to challenge her included two fillies at identical odds of 15-4, Toinette, winner of the Autumn Miss (G3) last October and an allowance last out, and Juliet Foxtrot, winner of the Modesty Handicap (G3).

Jockey Ruben Fuentes sent 106-1 longest shot Ippodamia's Girl to lead through fractions of 23.23 and 46.10 while pressed by Juliet Foxtrot and stalked by 14-1 Ahimsa. On the far turn Ippodamia's Girl tired as Juliet Foxtrot inherited the front through 3/4 in 1:10.76 and a mile in 1:34.68. Vasilika, 6th early under Flavien Prat, came out 3 wide for room and rallied to get up by a nose in 1:46.46 over the firm course. It was another 1 1/4 length back to Toinette third. 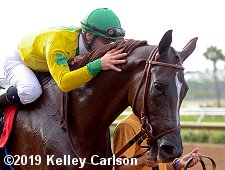 Left: Vasilika in the winner's circle. Winning trainer Jerry Hollendorfer said, "When they came back Prat told me 'She finds a way,' and that's true. He knows how to ride this filly and it looked like he felt comfortable the whole way. He didn't get her jammed down on the rail where she couldn't get out. He was out where he needed to be. I thought she was going to get there. It didn't look as close to me as it was. I'd like to see the photo. Sometimes you get a horse like this and you're just so grateful."

Right: Vasilika returns after the race. Winning jockey Flavien Prat said, "She put me in a good position today. Then she picked it up and started coming. (Toinette) bothered me just a little in the stretch; she was drifting out. It almost cost me the race. When we hit the wire, I thought I'd won. But when I came back and saw the replay, I thought I was just headed back to the room." 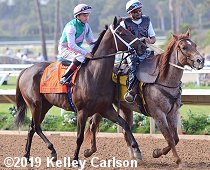 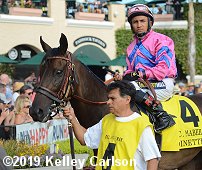 Left: Second place finisher Juliet Foxtrot in the post parade. Jockey Drayden Van Dyke said, "I just let her do her thing and she was rolling along. But (Vasilika) came to us outside, too far out for my horse to see. If she'd come in closer, it might have made a difference for my horse."

Right: Third place finisher Toinette in the paddock. Jockey Rafael Bejarano said, "We had a good trip today. We were right where we wanted to be. When we moved turning for home, I thought we were going to win it. But maybe it was just a little too far for her today."