The feature race at Aqueduct on Saturday was the $200,000 Excelsior Stakes (G3). A field of 6 older horses went 1 1/4 miles on the main track, with Wicked Strong sent off as the 3-5 favorite, winless since the Jim Dandy (G2) last July and coming off a fourth place finish in the Gulfstream Park Handicap (G2). In to challenge him included 6-1 second choice Effinex, an allowance winner after finishing fourth in the Alex Robb, and 13-2 third choice Micromanage, fourth in the Stymie last out. 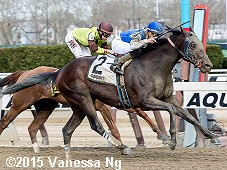 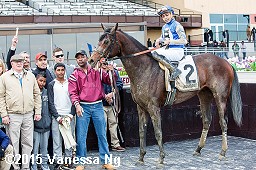 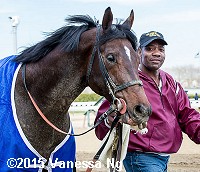 Left: Effinex in the winner's circle. Winning trainer Jimmy Jerkens said, "He had a long campaign last year, going against older horses. After he ran lackluster in the (Alex M. Robb Stakes), we decided there was no sense in knocking him out (with a winter campaign). We thought that if we gave him a late spring campaign, we could give him his best shot to become a better horse because he had run pretty hard last year."

Right: Effinex heads to the barn after the race. 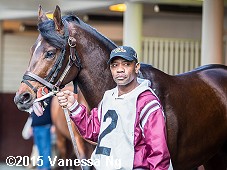 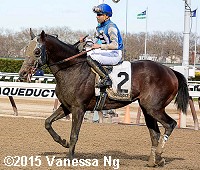 Left: Effinex in the paddock before the race.

Right: Effinex returns after the race. Winning jockey Angel Arroyo said, "I had the best trip. I was able to break good and relax behind the speed. I waited for the stretch, and my horse responded when I asked. He's a nice horse." 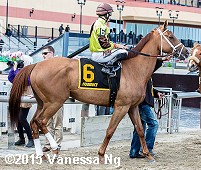 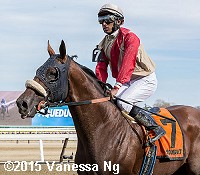 Left: Second place finisher Red Rifle heads out for the post parade. The 8-1 fourth choice set the pace under Irad Ortiz Jr. but was caught in the final 1/16 mile. The Todd Pletcher trainee improved his record to 5 wins, 5 seconds, and 1 third in 16 starts, earning $473,020 for owner-breeder Twin Creeks Racing Stables.

Right: Third place finisher and beaten favorite Wicked Strong returns after the race. Trainer Jimmy Jerkens said, "I was a little worried about running him 1 1/4 miles after having just one race in Florida, even though it was a good effort. It puts a horse in a different mindset when you have to go chasing fast horses then you have to slow them back down again. You try to do what you can in the morning, but there's only so much you can do. He'll be back."