A field of 8 older fillies and mares contested the $500,000 Flower Bowl Stakes (G1) at Belmont Park, a "Win and You're In" qualifier for the Breeders' Cup Filly and Mare Turf. The 1 1/4 mile turf contest was originally carded on Belmont Park's inner course but was moved to the Widener course for better footing. Ribblesdale (G2) winner Curvy was sent off as the 3-2 favorite off her close 4th in the Yorkshire Oaks (G1). In to challenge her included 5-2 second choice and defending champion Stephanie's Kitten off her second place finish in the Beverly D (G1), and 9-2 third choice Watsdachances, winner of the Beverly D (G1) and the Gallorette (G3).

Jockey Javier Castellano sent 7-1 fourth choice Danza Cavallo to the lead first time by and she set easy fractions of 26.45, 52.78, and 1:18.10 over the very soft course, while pressed by 23-1 Distorted Beauty and stalked by Stephanie's Kitten. At the top of the stretch Danza Cavallo continued to lead through 1 mile in 1:42.28. Stephanie's Kitten, third early, collared the pacesetter at the 3/16 pole, and after a brief duel, pulled away to a 1 1/2 length win in 2:06.23. It was another 3 1/4 lengths back to 14-1 Mutatis Mutandis third.

Check out the other races on the card: The Champage, Frizette, and Hill Prince and The Jockey Club Gold Cup. 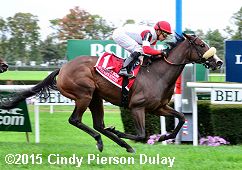 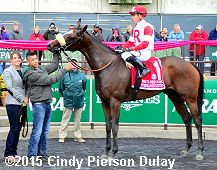 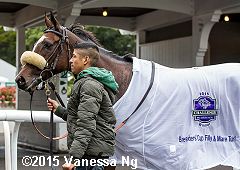 Left: Stephanie's Kitten in the winner's circle. Winning trainer Chad Brown said, "It's a little similar to last season when in her first couple starts she didn't run well, and then she rounded into strong form, right into the Breeders' Cup. This year it was a little different in that she kicked off the year with a win in the Hillsborough, but her form then regressed and we were asking ourselves the same questions. A combination of her currently training as well as she has all year and catching soft ground the last two starts resulted in her turning the season around. Her last two breezes were as good as I've seen her breeze in a year. You look at her - she's run at the Grade 1 level from age 2 to 6 - that's very rare."

Right: Stephanie's Kitten heads back to the barn in her "Win and You're In" blanket. Winning jockey Irad Ortiz Jr. said, "I had a great trip. I was able to save ground, she was so game in the stretch, and everything went perfect. She loved the ground today. She's so confident over it." 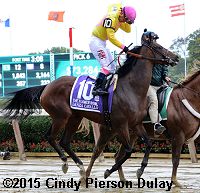 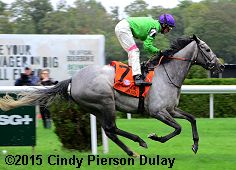 Left: Second place finisher Danza Cavallo in the post parade. Jockey Javier Castellano said, "My trip was beautiful, it couldn't be any better than that. I went right to the lead, the fractions were very, very slow. My horse handled the soft turf so well. I was just second-best today. I got beat by the better horse in the race." 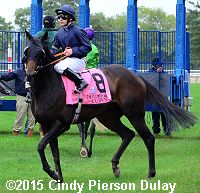 Fifth place finisher and beaten favorite Curvy behind the starting gate. Jockey Wayne Lordan said, "She didn't like the ground at all. It was too soft for her. She couldn't extend over it. It's unfortunate."


The $400,000 Kelso Handicap (G2) featured a field of 7 older horses going the one-turn mile trip over the Belmont main track. Metropolitan (G1) winner Honor Code was sent off as the 3-5 favorite off his win in the Whitney (G1). In to challenge him included 9-2 second choice Red Vine, 9th in the Pacific Classic (G1), and 11-2 third choice Tamarkuz, winner of the Godolphin Mile (G1) but 6th in the Forego (G1). 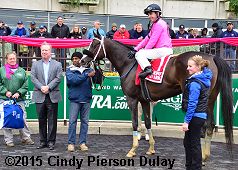 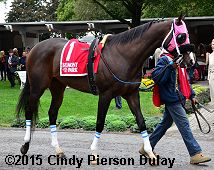 Left: Appealing Tale in the winner's circle. Winning trainer Peter Miller said (by phone from California) "He broke slow, and kind of had to rush up. It wasn't what I was hoping for but once he established himself on the lead he really just ran a great race. Really a super ride from Joe and this win is a credit to our whole team."

Right: Appealing Tale in the paddock before the race. Winning jockey Joe Talamo said, "We had a perfect trip. We went to the front and I kind of let him set his own fractions. Turning for home, I wanted to try and open up a little bit because I knew, obviously, that Honor Code and the horses were coming. But that was just an unbelievable performance." 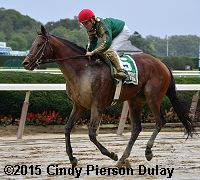 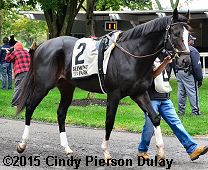 Right: Third place finisher and beaten favorite Honor Code in the paddock before the race. Trainer Shug McGaughey said, "The way things came up, it wasn't his day. He'll be fine for the Breeders' Cup. I really thought he would like the track surface OK. He's run good in it at Saratoga at times. But, like I said, in the second race, it looked like speed was holding a little bit. I got a little bit concerned there. It looked like when he came down on the inside he was struggling a little bit."