A crowd of 45,212, the second-largest ever, gathered at Monmouth Park to witness the Grade 1 Haskell Invitational, over 1 1/8 miles. War Emblem, the Derby and Preakness winner, was the highweight and was sent off as a deserving 0.30-1 favorite, once the originally drawn 9 horse field scratched down to just 5. Both Easyfromthegitgo and Medaglia d'Oro opted to run in the Jim Dandy at Saratoga while Island Skipper had an abcess and couldn't run. Magic Weisner, second in the Preakness and fourth in the Belmont, was the second choice at 5.50-1.

Although War Emblem was a bit fractious in the gate, when the race got underway he was all business. Victor Espinoza sent him immediately to the front, with Puck stalking him to the inside. They ran the initial quarter in 23.83 and the half in 47.23 when Puck dropped back and Mr. Mellon inherited second. War Emblem extended his lead to 1 1/2 lengths after six furlongs in 1:10.67, when Laffit Pincay Jr. asked early trailer Like A Hero to make his move toward the leader. In mid-stretch, War Emblem was 4 1/2 lengths in front of Like A Hero after a mile run in 1:35.41. The late-running Magic Weisner was coming on strong in the stretch but it would prove to be futile as War Emblem finished 3 1/2 lengths clear in a final time of 1:48.21. It was another 3/4 lengths back to Like A Hero. War Emblem became the first ever Kentucky Derby winner to capture the Haskell in its 35-year history.

First time by and War Emblem had already taken command. Trainer Bob Baffert said, "I asked Victor after the race when he knew he had the race won. He said he knew as soon as he came out of the gate, he had so much horse. I hoped the race would be that easy. The easier the race, the longer they last." 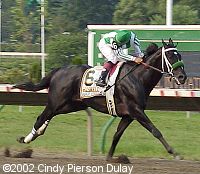 In deep stretch, jockey Victor Espinoza looks back to see if anyone is going to challenge War Emblem. He said afterward, "I never really asked him to run. He did it very easy today. This horse today, actually every day, he's all business. He just loves to win." 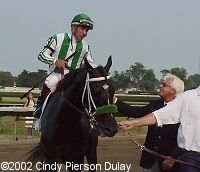 Trainer Bob Baffert greets Espinoza after the race to congratulate him on a job well done. Espinoza added, "I wasn't worried. My horse was going along so easy today and I knew nobody was going to catch us." 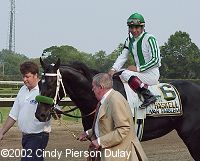 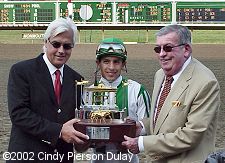 Bob Baffert, Victor Espinoza, and Richard Mulhall with the Haskell trophy. Bob Baffert indicated that War Emblem's will ship back to California and his next start will likely be in the Pacific Classic at Del Mar.

Bob Baffert gets a kiss from his new wife Jill Moss in the winner's circle. They just got married on Saturday. 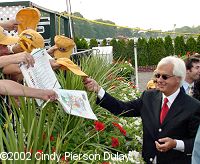 Baffert stops to sign autographs for the fans on the way out of the winner's circle. 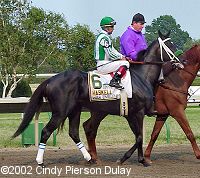 Eventual winner War Emblem in the post parade. Jockey Victor Espinoza said: "It was a little funny coming out of the tunnel there, all I saw was this sea of yellow hats. It looked like a giant pumpkin." (The Haskell giveaway today was a yellow hat.) 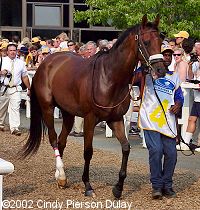 Second place finisher Magic Weisner entering the paddock before the race. Nancy Alberts, his owner-trainer, said, "He ran awesome. He tries so hard every time." 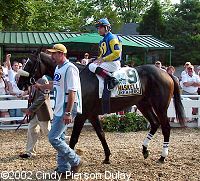 Third place finisher Like a Hero in the paddock prior to the race. Trainer Beau Greely said, "He ran a great race. I'm delighted. He got beat by two very good horses. My horse will probably get better with more distance. We'll take him up to Saratoga and think about the Travers." 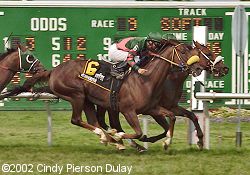 Also on the card was the Grade 3 Eatontown Handicap for the fillies and mares at 1 1/16 miles on the turf. The winner was Clearly a Queen in a close photo with Laurica after a thrilling stretch duel. Winning jockey Eibar Coa said: "She's been trying very hard her last three races. She's really improving this year."
Results chart Race 9