The 35,303 fans who came out to Monmouth Park on Sunday afternoon for the Haskell Invitational to witness Girvin upset local hero Irish War Cry and favorite Timeline also enjoyed 5 stakes races on the undercard. Conditions were excellent on the Jersey Shore with sunny skies and temperatures near 80. 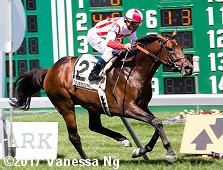 Jockey Eric Cancel sent 13-1 Smooth Daddy to the lead through fractions of 25.34, 50.24, and 1:13.07 while pressed by 15-1 Thatcher Street and stalked by Money Muliplier. Turning for home, jockey Javier Castellano sent Money Multiplier 3 wide to lead through 1 mile in 1:36.29. Kept to task by Castellano, Money Multiplier cruised to a 1 1/2 length win over late-runnng Irish Strait in 1:47.91 over the firm going. It was another 1 1/2 lengths back to Kharafa third. 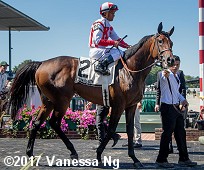 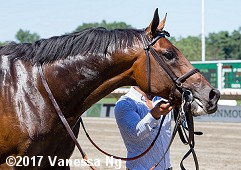 Left: Money Multiplier in the winner's circle. Winning jockey Javier Castellano said, "He broke really well. I felt the pace was slow so I didn't want to move too early on him. I got him to the outside and in the clear and he started to roll. You saw how fit he was when he was just galloping along at the half-mile pole. He seemed to just enjoy the ride the way he did it."

Right: Money Multiplier heads back to the barns. Winning trainer Chad Brown said, "He ran good. It didn't quite work out the way I thought with him getting jammed up behind a really slow pace. Javier used good judgement to pull him out of there and pass everyone. When you have someone like Javier, with his level of experience, he can call those audibles in the middle of a race.'' 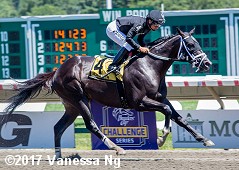 Kicking off the stakes action on Haskell day, the $200,000 Monmouth Cup Stakes (G3), formerly run as the Meadowlands Cup, featured a field of just 4 older horses going 1 1/16 miles on the main track. Metropolitan (G1) runner-up Sharp Azteca was sent off as the 3-10 choice over 5-1 Classy Class, winner of the Salvator Mile (G3), 6-1 Just Call Kenny, second in the Salvator, and 13-2 Donegal Moon, 4th in the Salvator.

Jockey Antonio Gallardo sent Classy Class to the front first time by and he set fractions of 23.94, 47.13, and 1:10.69 while pressed by Sharp Azteca and stalked by Just Call Kenny. Turning for home, jockey Paco Lopez sent Sharp Azteca to lead and he left the field in his wake, winning by 7 1/2 lengths over Donegal Moon in a new track record time of 1:40.19, just 1/100 second faster than Formal Gold's previous record set in 1997. It was another 3 1/4 lengths back to Just Call Kenny third, and 3/4 more to pacesetter Classy Class last. 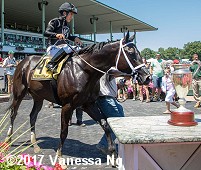 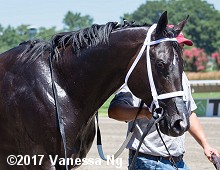 Left: Sharp Azteca in the winner's circle. Winning trainer Jorge Navarro said, "Mission accomplished. We put the 1 1/16 away. And it was a relief to get him back in great shape. He almost got loose in the barn (Saturday) night and cut his head. Then on the way over to the paddock (Sunday), he flipped. He was okay, but it was another worry. It was fantastic to see him run so well after all that."

Right: Sharp Azteca heads back to the barns. 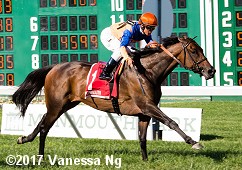 Jockey Wilmer Garcia sent 14-1 Judy's Chance to the lead first time by and she set fractions of 24.61, 48.71, and 1:12.13 while pressed by Miss Temple City and stalked by 26-1 Quiet Kitten. Entering the lane, Judy's Chance tired allowing Miss Temple City to inherit a short lead through 1 mile in 1:36.07. However, Wekeela, who sat 4th early, came through on the rail under Javier Castellano and outfinished War Flag to win by 3/4 length in 1:47.97. It was another length back to Miss Temple City third. 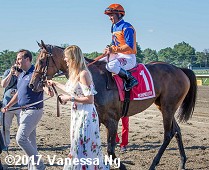 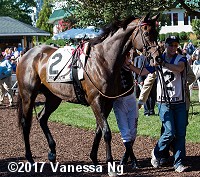 Left: Wekeela heads to the winner's circle. Winning trainer Chad Brown said, "It set up just like we planned. Javier and I spoke in the paddock about how we had a terrific post position, but we had a lot of respect for both War Flag and Miss Temple City. We knew Weekela was probably going to have to get a perfect trip to beat those two horses today, and Javier executed that perfectly. He used that good post position to save all the ground. Luckily the inside opened up and she got the jump on everybody and held strong."

Right: Third place finisher and beaten favorite Miss Temple City in the paddock before the race. Winning jockey Javier Castellano said, "My plan was to be right behind the horses, saving as much ground as possible. You need to have a perfect trip to beat Miss Temple City and that's what happened. I was very aware of the situation. I took my shot riding the rail and it worked out great." 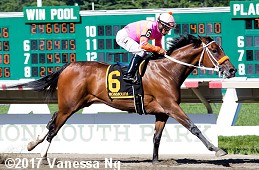 Jockey Paco Lopez sent 9-1 Money'soncharlotte to the front first time by and she set fractions of 23.78, 47.82, and 1:11.64 while pressed by 43-1 Miss Inclusive and stalked by Carrumba. Entering the stretch, Money'soncharlotte opened up by 3 lengths through 1 mile in 1:36.33. Eskenformoney put in a strong late rally from last early but Money'soncharlotte easily held her off by 1 1/4 lengths in 1:42.80. It was another 2 1/2 lengths back to favorite Carrumba third. 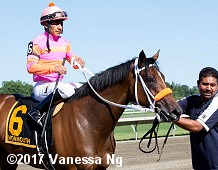 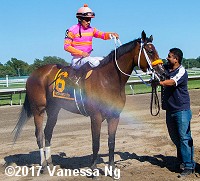 Left: Money'soncharlotte heads to the winner's circle. Winning trainer Kelly Breen said, "We pointed for this. Monmouth is her home track, and she's been training great. She's good right now, and when a filly is good, she's really good. Paco (jockey Lopez) told me before the race that he thought there was a lot of speed in the race and he wanted to take back. Okay. So then she's in front right after the break and I said to George (owner Hall), ‘That's Paco taking back.' A great win."

Right: Money'soncharlotte has a rainbow as she gets hosed off. Winning jockey Paco Lopez said, "I planned on sitting second or third, but when no one else was going, we did. She was cruising up front and when we got to the 1/4 pole I took a look back and didn't see anyone coming. I asked her a little bit just to spurt away and she took off." 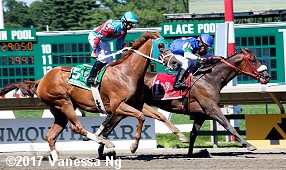 The $60,000 John J. Reilly Handicap featured a field of 7 older New Jersey breds sprinting 6 furlongs on the main track. The two-horse entry of Chubilicious and Visionary Ruler rwas the 9-10 favorite over 3-2 Fast Friar and 7-1 Saucy Don.

37-1 Credo, Saucy Don, and Visionary Ruler disputed the pace early through fractions of 22.20 and 44.91. Turning for home, jockey Antonio Gallardo sent Chubilicious, 4th early, 3 wide to sweep to the front. Fast Friar, 6th early, moved up to challenge but Chubilicious held on to win by a head in 1:08.37. It was a long 7 1/4 lengths back to Visionary Ruler third.

On to the 2017 Haskell results and photos