The feature race on Saturday at Del Mar was the $300,000 Hollywood Derby (G1) for three-year-olds going 1 1/8 miles on the Jimmy Durante turf course. Conditions were excellent as usual at the seaside oval with sunny skies and temperatures in the mid 60's. Om was sent off as the 9-10 favorite in the full field of 14 off his wins in the Del Mar Derby (G2) and the Twilight Derby (G2). In to challenge him included 8-1 second choice Closing Bell, second in the Secretariat (G1) at Arlington, and 9-1 third choice Mister Brightside, runner-up in the Twilight Derby after shipping in from England.

Jockey Alonso Quinonez sent 60-1 Acceptance to the lead exiting the chute and he set fractions of 23.51, 47.41, and 1:12.23 over the firm course while as many as 3 lengths ahead of Om and Closing Bell stalking him second and third. Entering the stretch, jockey Gary Stevens sent Om to the front and he quickly opened up a 1 1/2 length lead on the tiring pacesetter. However, 14-1 Chiropractor, 3 wide, and 12-1 March, 5 wide, passed him in deep stretch as Chiropractor prevailed by a head in 1:48.87. It was another head back from March to favorite Om third. 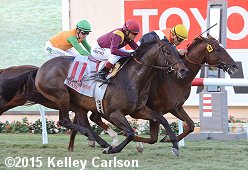 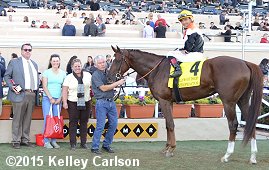 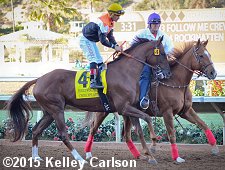 Right: Chiropractor in the post parade. Winning jockey Corey Nakatani said, "What a great outfit to ride for. Tom always has them ready. I asked him if he wanted me to do anything special, but he said, no, just ride your race. Get him to settle and you'll be fine. With these kind of races, the pace is the key. And that worked well for us today. The colt was full of himself today and when it came time he fired." 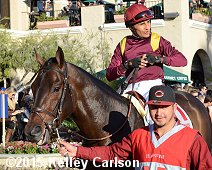 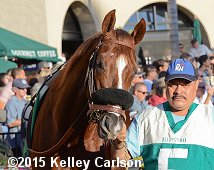 Left: Second place finisher March in the paddock. Jockey Rafael Bejarano said, "A good race for him. No excuses for me. We were in a good spot; we had a good trip. We were just outfinished."

Right: Third place finisher and beaten favorite Om in the paddock. Jockey Gary Stevens said, "It was a super effort by this horse today. He threw a fit in the starting gate. We had all kinds of problems; he kicked the you-know-what out of it. He was good during the running though. He wasn't pulling. He ran his race and ran well. We just got beat."


Kicking off the stakes trio on Saturday was the $100,000 Jimmy Durante Stakes (G3), formerly run as the Miesque at Hollywood Park, featured a field of 12 two-year-old fillies going 1 mile on the turf. Riri, undefeated in 2 starts in allowance company, was sent off as the 2-1 favorite over 7-2 second choice Jeremy's Legacy off his maiden win, and 9-2 third choice Mirage, 8th in the Breeders' Cup Juvenile Fillies Turf (G1) after placing second in the Surfer Girl Stakes. 7-1 Corps de Ballet dueled for the lead with Jeremy's Legacy through fractions of 23.21, 48.03, and 1:13.10 while stalked by Riri in third. Corps de Ballet stubbornly held the lead to mid stretch through 7/8 in 1:25.40 before tirng badly. 6-1 Mokat, 6th early, rallied to gain a short lead at the 1/16 pole but 37-1 Family Meeting, 9th early, rallied 4 wide to win by 1/2 a length in 1:37.14. It was another 1 3/4 lengths back to 12-1 Sutton's Smile third, while favorite Riri tired in the lane to check in 10th. 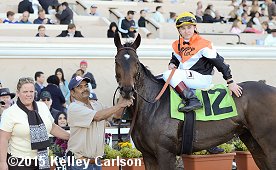 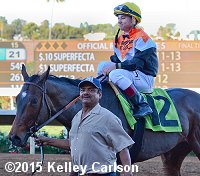 Left: Family Meeting in the winner's circle. Aimee Dollase, assistant to winning trainer Tom Proctor said, "She's a nice filly. It's hard to step up to a stakes coming off a maiden win but she showed some class today. She comes from off the pace, so the way the race unfolded was good for her."

Right: Family Meeting returns after the race. Winning jockey Drayden Van Dyke said, "She's a little green; she hasn't quite figured it all out yet. She was idling on me. But I could feel I had a ton of horse under me, so I just wanted to keep her calm. When it came time she went. She's a good one. Can't wait to see what she does next." 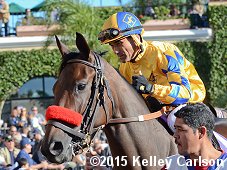 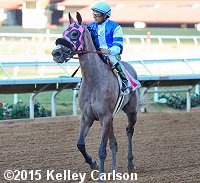 Left: Second place finisher Mokat in the paddock. Jockey Corey Nakatani said, "It was good for me – good trip, good try. She just broke her maiden and here she is in with the stakes horses. This course has some cut to it and she ran dynamite on it today."

Right: Third place finisher Sutton's Smile returns after the race. Jockey Victor Espinoza said, "No problems with my horse. She ran good. She's the kind that will improve as she gets older too. The future is bright." 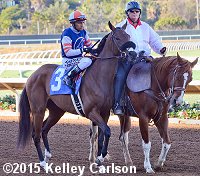 Tenth place finisher and beaten favorite Riri in the post parade. The 2-1 choice stalked the pace under Rafael Bejarano early but weakened in the final 3/16 mile to finish 10th beaten 6 lengths. The Phil D'Amato trainee has a record of 2 wins, 0 seconds, and 0 thirds in 3 starts, earning $63,250 for owners Little Red Feather Racing and R/M Racing.


Closing out the stakes trio on Saturday was the $150,000 Native Diver Stakes (G3) for older horses going 1 1/8 miles on the main track. Santa Anita Derby (G1) winner Dortmund was the 3-5 favorite in the field of 5 off his win in the Big Bear Stakes. In to challenge him included 3-1 second choice Iron Fist, an allowance winner after finishing 2nd in the Pennsylvania Derby (G2), and 7-2 third choice Imperative, 4th in the Awesome Again (G1). 29-1 longest shot Majestic City dueled on the front end with Dortmund through fractions of 23.75, 47.61, and 1:11.36. Entering the stretch Dortmund began to draw off, opening up by 2 1/2 lengths through 1 mile in 1:35.71. Kept to task by new jockey Gary Stevens, Dortmund cruised to a 4 1/2 length win over Imperative in 1:48.06. It was another 1 1/2 lengths back to Iron Fist third. 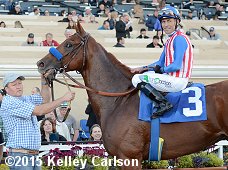 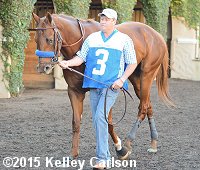 Left: Dortmund in the winner's circle. Winning jockey Gary Stevens said, "He's as big as Point Given was. When I got legged up, I felt like I was going back in time. He's a big, long-striding horse. He's got a big engine. I didn't know how much acceleration he had, but he hit another gear at the 5/16 pole. He's got sprinter speed, but he acts like he can run 1 1/4 miles."

Right: Dortmund in the paddock before the race. 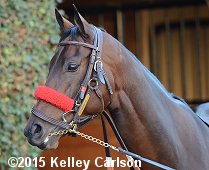 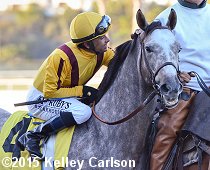 Left: Second place finisher Imperative in the paddock before the race. The 7-2 third choice sat back 4th 2 1/2 lengths off the pace under Mario Gutierrez, then rallied to get second beaten 4 1/2 lengths. The Richard Baltas trainee improved his record to 3 wins, 6 seconds, and 3 thirds in 27 starts, earning $1,693,120 for owner KM Rcacing Enterprise Inc.

Right: Third place finisher Iron Fist in the post parade. The 3-1 second choice was last 2 3/4 lengths back under Mike Smith then passed tiring horses to get third beaten 6 lengths. The Jerry Hollendorfer trainee improved his record to 3 wins, 3 seconds, and 2 thirds in 10 starts, earning $415,600 for owners Regis Farms and Stonestreet Stables.