The highlight of the Belmont Park Fall Championship Meeting is the $1 million Jockey Club Gold Cup (G1), a "Win and You're In" qualifier for the Breeders' Cup Classic, contested at the Classic distance of 1 1/4 miles on the main track. Light rain fell during the races, however the main track remained officially fast and the turf courses firm at the Long Island oval, with temperatures in the high 60's. After 1 scratch, a field of just 5 went to post with Effinex sent off as the 5-4 favorite. In to challenge him included 7-4 second choice Mubtaahij and 7-2 third choice Hoppertunity.

Jockey Javier Castellano sent 6-1 Protonico to the lead out of the gate and he set fractions of 24.87 and 49.03 before Effinex took over down the backstretch through 3/4 in 1:12.18 and 1 mile in 1:35.98, pressed by Protonico and stalked by Mubtaahij. At the top of the lane Protonico fought back to regain a short lead at the 1/8 pole before tiring. Hoppertunity, 4th for the first 7f under John Velazquyez, came out 4 wide for room, sweeping to the lead at the 1/16 pole to win by 1/2 a length over Effinex in 2:00.68. It was another 2 1/2 lengths back to Protonico third.

Check out the other races on the card: The Champage, Frizette, and Hill Prince and The Flower Bowl and Kelso Handicap. 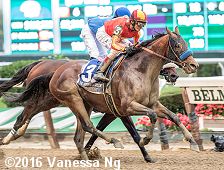 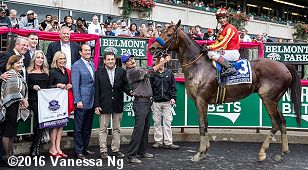 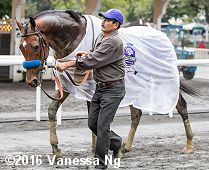 Left: Hoppertunity in the winner's circle. Jimmy Barnes, assistant to winning trainer Bob Baffert said, "There wasn't a whole lot of speed in the race other than Effinex. Everybody stayed sensible. The most important thing for Hopper is that he was standing good and broke good and he was placed more forwardly in the race, especially on a slow pace, that's probably why he was a little closer. We always thought in our minds that he would like these big turns here, and this big, deep track where he would have a chance to come from behind. We didn't want run at home. This race is 1 1/4. You run in the Awesome Again, it's 1 1/8. The horse wants distance - that was the main reason to come here. He's had a tough campaign. He's won at Churchill, he's won at Santa Anita. He ran his race in Dubai, but he had to run against California Chrome there."

Right: Hoppertunity heads back to the barn in his "Win and You're In" blanket. 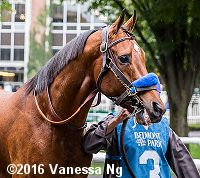 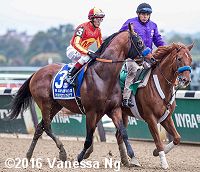 Left: Hoppertunity in the paddock before the race. Winning jockey John Velazquez said, "They told me he can be a little lazy the first part of the race so I sent him out of there and made sure he was somewhere in the mix, not too far back. He was in the bridle, so he was very good and just cruising along at a good pace. I was just kind of reminding him to stay where I needed him to be and he did everything I wanted him to. I knew that he's always going around other horses and I wanted him to be inside, save all the ground I could and try to work my way out somewhere around the 3/8 pole, the 1/4 pole, and it worked out that way. 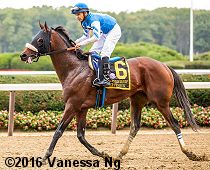 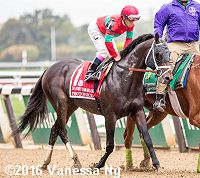 Left: Second place finisher and beaten favorite Effinex returns after the race. Owner Dr. Russell Cohen said, "We haven't missed anything with him, he hasn't shied away from anybody. At the end of the day, I'm honored just to be here and have a horse of his significance and impact in the game. Being a small outfit with very humble circumstances, I'm really honored to have a really sound horse that shows the high levels of racing can be achieved. We're in for the Breeders' Cup. There's no question about it, we're going."

Check out the other races on the card: The Champagne, Frizette, and Hill Prince and The Flower Bowl, Kelso Handicap, and Belmont Turf Sprint Invitational..