There were four graded stakes contested on the second Saturday of the Saratoga summer meeting. Conditions were excellent with sunny skies and temperatures in the mid 70's at the historic oval.

The $600,000 Jim Dandy Stakes (G2) is the major local prep for the Travers (G1) to be run 4 weeks later. A field of 5 three-year-olds contested this 1 1/8 mile main track test, with Kentucky Derby (G1) and Florida Derby (G1) winner Always Dreaming sent off as the 11-10 favorite. In to challenge him included 6-5 second choice Cloud Computing, winner of the Preakness (G1), and 8-1 third choice Pavel, a debut winner at Santa Anita last out.

Jockey John Velazquez sent Always Dreaming to the lead first time by and he set fractions of 24.13, 48.53, and 1:13.27 while as many as 3 1/2 lengths clear of Cloud Computing stalking him in second, in turn a length ahead of Pavel sitting in third. Entering the lane, Always Dreaming continued to lead through 1 mile in 1:38.23 but 17-2 fourth choice Good Samaritan, last for the first 3/4 mile, came out 6 wide under Joel Rosario and rallied by to win going away by 4 3/4 lengths over late-running 14-1 longest shot Giuseppe the Great in 1:50.69 over the fast main track. It was another 1/2 length back to favorite Always Dreaming third.

The Vanderbilt and Bowling Green Handicaps also on the card 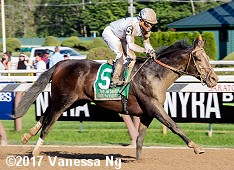 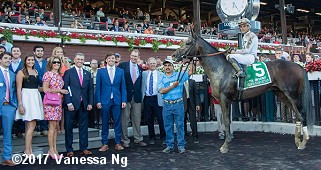 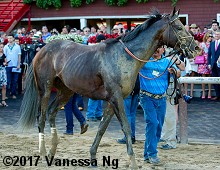 Left: Good Samaritan in the winner's circle. Winning trainer Bill Mott said, "The pace was a little bit slower than I thought it would be, I was a little concerned when they were going down the middle of the backside and they hung up the slow fractions, I was a little concerned about that. They did start to pick it up leaving the half-mile pole, he ran into a very slow pace and ran well. You saw him coming through the stretch. He looks like he was good enough to get it done today. He looked pretty good. We'll certainly nominate for the Travers and we'll talk about it. I don't see why we wouldn't give it a try."

Right: Good Samaritan heads back to the barn after the race. 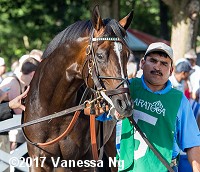 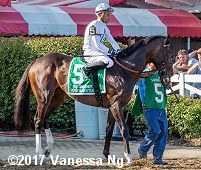 Left: Good Samaritan in the paddock. Winning jockey Joel Rosario said, : "He tries hard all the time. He got beat a couple of times by good horses, but he looked like he really had it today. Actually, he does not have a lot of [early] speed, so I just let him be and be where he is happy. He wants to always put in one last run. When I passed the 3/8 pole, he gave me a very good feeling. He was getting over the track very nice, so I just kind of tried to save a little ground before turning for home, but he was on his game today."

Right: Good Samaritan heads out for the post parade. Mott added, "We decided to continue on the grass for another race and point toward the Belmont Derby, which he ran very good there, but after he finished that race up, Elliott thought it was time to get him to the dirt. We actually discussed waiting for the Travers for his first race [on the dirt]. Last week, we came to the conclusion we should try this race. Initially, it was going to be the Travers and then the way this was coming up it looked like we were going to have a decent pace in this race and the horse was doing so well that we decide to make this choice. 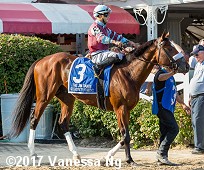 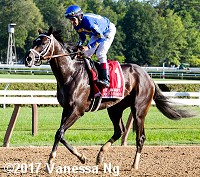 Left: Second place finisher Giuseppe the Great heads out for the post parade. The Nick Zito trainee improved his record to 1 win, 3 seconds, and 1 third in 6 starts, earning $287,500 for owner Mossarosa.

Right: Third place finisher and beaten favorite Always Dreaming returns after the race. Jockey John Velazquez said, "He broke really well, and it went like we were expecting. We got the lead and (Javier Castellano aboard Cloud Computing) was laying second because that's the types of horses they are. He put in a really good fight down the lane, he just couldn't get away from the other horses for whatever reason." 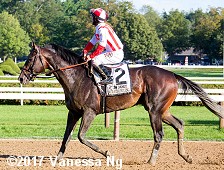 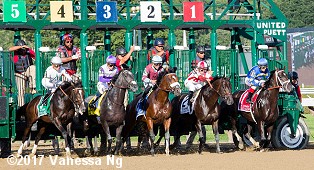 Left: Last place finisher and Preakness winner Cloud Computing returns after the race. Jockey Javier Castellano said, "I thought I had a perfect position in the race. I let Always Dreaming dictate the pace, so I was able to let up a little bit and save all the ground and, little by little, go for him. [Cloud Computing] just didn't fire today."

Right: The horses break from the gate for the Jim Dandy Stakes.


Kicking off the stakes action on Saturday was the $200,000 Amsterdam Stakes (G2) for 3-year-olds sprinting 6 1/2 furlongs on the main track. Coal Front, undefeated in 2 starts, was sent off as the 3-5 favorite in the field of 7 over 7-2 Mo Cash, second in the Carry Back (G3) at Gulfstream, and 6-1 Toga Challenger, an allowance winenr last out at Belmont. 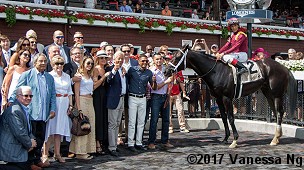 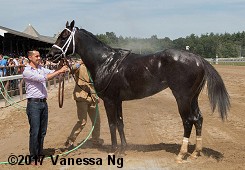 Left: Coal Front in the winner's circle. Winning trainer Todd Pletcher said, "We knew he was fast, but we didn't want to be in a speed duel, but we didn't want to take away what is coming easy to him [either]. We kind of left it in Johnny's hands. Johnny said he was very relaxed, really comfortable. A really talented horse. It's hard to win a race, much less the first three, and he beat a pretty strong group of older horses last time, and then to step up into a graded stakes, it just seems like he's getting better and better. We've done a lot of work with him with the gate crew, and they've done a great job with him. He loaded up really well today, which he did not do last time. He acted really professionally during the race. He kind of pricked his ears coming to the wire which is hard to do when they run that fast."

Right: Coal Front get hosed off after the race. Winning jockey John Velazquez said, "It really worked out good. We liked the post position and we wanted to get into position anyway. He broke really well. He settled really well where he was. It was pretty easy, really. He was playing around a little, and once I got serious with him, as soon as I let him know he needed to run, he responded right away." 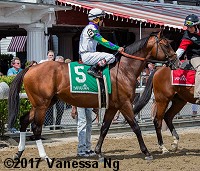 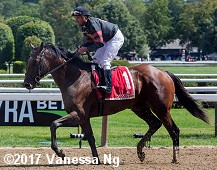 Left: Second place finisher Excitations heads out to the track before the race. The Al Stall Jr. trainee improved his record to 2 wins, 2 seconds, and 1 third in 7 starts, earning $126,200 for owners Fair Grounds Racing Club Inc.