The highlight race of the Del Mar meeting is the $1 million TVG Pacific Classic (G1), featuring the best older horses of the west coast going 1 1/4 miles over the new dirt track, which was recently converted back from Polytrack, and is a Breeders' Cup Challenge "Win and You're In" qualifier for the Classic. 20,424 fans packed the seaside oval on Saturday afternoon under sunny skies and temperatures in the mid 70's. As expected, 2013 Breeders' Cup Distaff (G1) winner Beholder was sent off as the 2-1 favorite in the field of 10 off her 4 race winning streak including the Clement L. Hirsch (G1). In to challenge her included 7-2 second choice Bayern, winless since last year's Breeders' Cup Classic (G1) and third in the San Diego Handicap (G2), and 9-2 third choice Red Vine, second in the Salvator Mile (G3).

Bayern and 24-1 Midnight Storm hooked up in a speed duel exiting the chute, as the pair set quick fractions of 22.36, 45.45, and 1:09.98 with Bayern holding a head advantage the whole way. Jockey Gary Stevens kept Beholder in stalking position third about 4 lengths off the lead pair. At the 3/8 pole, Stevens moved Beholder out for room and she surged past the pacesetters, quickly opening up a 3 length lead at the top of the lane through 1 mile in 1:35.12. 8-1 Catch a Flight, 5th early, put in a late rally which proved futile as Beholder drew off to win by 8 1/4 lengths in 1:59.77 over the fast main track, just 66/100 seconds off Candy Ride's stakes and track record set in 2003. It was a length back to Red Vine third. 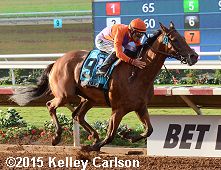 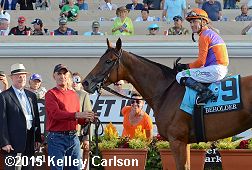 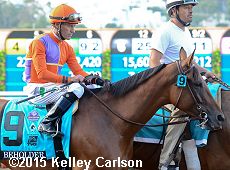 Left: Beholder in the winner's circle. Trainer Richard Mandella (far left), celebrating his 4th Pacific Classic win, said, "I've never felt emotion over a race quite like this. When she made that move, it just took my breath away. I'm flabbergasted. I expected her to run well or I wouldn't have put her in this race. But I didn't think she'd beat those colts up like that. You know how some people get emotional when they get old. I think I'm in that mode. I'm just starting to turn." Asked about the Breeders' Cup Classic he added, "All year she's had the fillies and mares under control. The last couple I got to thinking I didn't want to ship her but I wanted to do something special with her and this was it. This was the apple on the tree." Beholder is the first female horse to win the Pacific Classic in its 25-year history, with the second largest margin of victory, 8 1/4 lengths, just 1/4 length short of Game On Dude's 8 1/2 in 2013.

Right: Beholder in the post parade. Jockey Gary Stevens, ceebrating his 3rd Pacific Classic win said, "She did that (winning move) all on her own. I've never experienced anything like that before. I don't know what to compare it to. The way she warmed up today and the way she was on Monday in her final workout. I've never walked into the starting gate in a $1 million race as confident. No nerves at all. Usually there is a matter of nerves involved into these races. She caused me to have a normal heart rate going in there and that's how she ran. Her last two races have been her best races. She's been stepping it up, and I don't know how she does." Owner B. Wayne Hughes added, "I've had a few good horses in the past. Always had a happy time and enjoyed it. But she is the first horse that makes me feel lucky to be the owner. I've never had that feeling before. I think it's called pride." 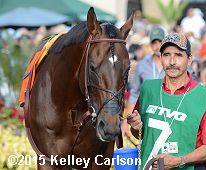 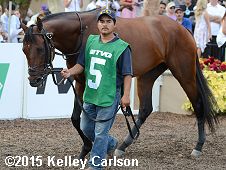 Left: Second place finisher Catch a Flight in the paddock before the race. Jockey Flavien Prat said, "He ran good. A very good race for him. The filly, she's just too much." Trainer Richard Mandella added, "Catch a Flight ran great, he's a good horse."

Right: Third place finisher Red Vine in the paddock. Jockey Joel Rosario said, "A good try for my horse. I think his people are very happy. He shipped all this way and ran well."

Immediately before the Pacific Classic was the $250,000 Del Mar Handicap (G2) for older horses going 1 3/8 miles on the turf, and is a "Win and You're In" qualifier for the Breeders' Cup Turf. Charlie Whittingham (G2) winner Ashleyluvssugar was sent off as the 9-5 favorite in the field of 8 over 2-1 defending champion Big John B, off his Cougar II (G3) win, and 9-2 Ganesh, second in the Charlie Whittingham. 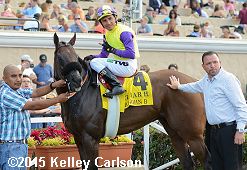 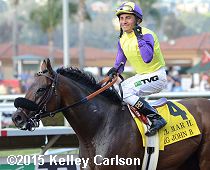 Left: Big John B in the winner's circle. Winning trainer Phil D'Amato said, "They were going so slow up front and Big John B was off the pace. I didn't know if he would have enough of a kick but he really did. My other horse (Danas Best, 5th) ran a good race too, he was just stuck down inside."

Right: Big John B returns after the race. Winning jockey Rafael Bejarano said, "I knew they were going slow, but that was OK. My horse has only one pace, one way to go, and I can't change it. It all came the right way. When we hit the 3/8 I asked him to go and he really put it in. He has a great kick. He's a powerhouse. He runs so well and he ran well today." 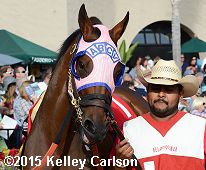 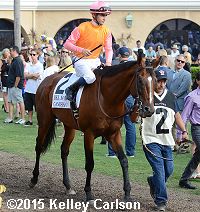 Left: Second place finisher and beaten favorite Ashleyluvssugar in the paddock before the race. Trainer Peter Eurton said, "I'm really pleased with his race. I almost decided I wouldn't run him, but the last couple of weeks he's gotten good again and Gary (Stevens) gave him a great ride."

Right: Third place finisher Ganesh in the paddock. Jockey Flavien Prat said, "He ran well. He hadn't run in a while (three months) and he probably needed the race."

The first stakes race on Saturday was the $250,000 Pat O'Brien Stakes (G2) featuring older horses sprinting 7 furlongs, and is a Win and You're In qualifier for the Breeders' Cup Dirt Mile. After 1 scratch just 4 faced the starter, with San Diego (G2) runner-up Appealing Tale the 6-5 favorite over 2-1 Kobe's Back, third in the Bing Crosby (G1), and 5-2 Wild Dude, winner of the Bing Crosby. 7-1 Indexical, 7th in this race last year, completed the field. 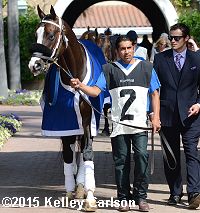 Left: Appealing Tale in the winner's circle. Winning trainer Peter Miller said, "I felt really good when I saw the 23 1/5. He's such a fighter this horse, he loves a dogfight, and when they came up next to him I knew he wouldn't give up. I felt pretty confident all the way. We're pointing for the Dirt Mile. He's such a game horse and he can go anywhere from 7/8 to 1 1/16, so the mile is right in his wheelhouse."

Right: Appealing Tale in the paddock before the race. Winning jockey Joe Talamo said, "This is the fourth time I've ridden this horse and he just shows up every time. He's so game. He's a treat. When I felt that first quarter (:23.34), I was smiling. I really liked that. When (Wild Dude) came to me in the stretch, he fought back. He fought him off. He's a good one." 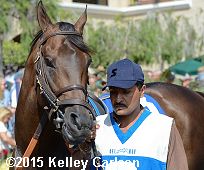 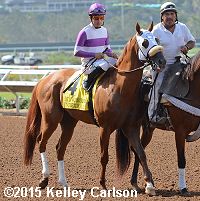 Left: Second place finisher Wild Dude in the paddock before the race. Jockey Flavien Prat said, "We had the good trip today; right where we wanted to be. My horse fought on; he tried hard. But the winner got us. We had to give him four pounds (123 – 119). That didn't help."

Right: Third place finisher Indexical in the post parade. Jockey Mario Gutierrez said, "It was a good try for him. That's all."