The co-feature on Saturday at Parx Racing near Philadelphia was the $1 million Pennsylvania Derby (G2) for 3-year-olds going 1 1/8 miles on the main track. Conditions were excellent with partly cloudy skies and temperatures in the mid 80's. As expected Wood Memorial (G1) winner Frosted was sent off as the even-money choice in the field of 9, off his third place dfnish in the Travers (G1) after second in the Belmont (G1) and Jim Dandy (G2). In to challenge him included 7-2 second choice Upstart, fourth in the Travers after third in the Haskell (G1), and 11-2 third choice Madefromlucky, winner of the West Virginia Derby (G2) after 6th in the Belmont.

Also on the card was the Cotillion Stakes (G1) won by I'm a Chatterbox. 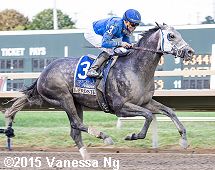 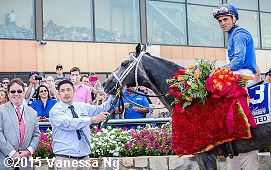 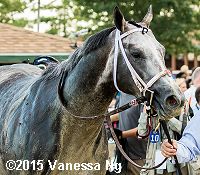 Left: Frosted in the winner's circle. Winning trainer Kiaran McLaughlin said, "He's a top horse and the last three out of his last four runs have been against American Pharoah, so it's great (American Pharoah) wasn't here and we were able to shine today. We'll train on and we're definitely going to point that way (to the Breeders' Cup). We're happy with a little more time."

Right: Frosted heads back to the barn after the race. 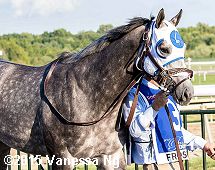 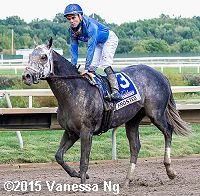 Left: Frosted heads to the paddock before the race. Winning jockey Joel Rosario said, "He really put in a good run. It was a very good race. He finished really well. I can't be more happy than I was."

Right: Frosted returns after the race. 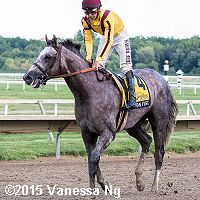 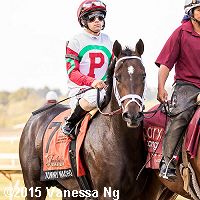 Left: Second place finisher Iron Fist returns after the race. The 10-1 shot stalked the pace in second under Mike Smith, gained a short lead on the far turn, but was no match for the winner. The Jerry Hollendorfer trainee improved his record to 2 wins, 3 seconds, and 1 third in 8 starts, earning $364,600 for owners Regis Farms and Stonestreet Stables.

Right: Third place finisher Tommy Macho in the post parade. The 15-1 shot raced as much as 7 lengths back under Javier Castellano then passed tired horses to finish third beaten 10 lengths. The Todd Pletcher trainee improved his record to 2 wins, 0 seconds, and 3 thirds in 6 starts, earning $273,050 for owners Paul Pompa Jr. and All American Horses. 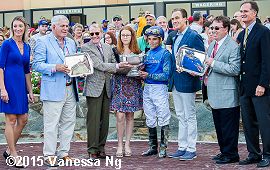 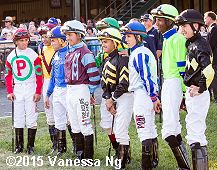 Left: The trophy presentation for the Pennsylvania Derby

The first of three graded stakes on Saturday was the $300,000 Gallant Bob Stakes (G3) for 3-year-olds sprinting 6 furlongs on the main track. King's Bishop (G1) runner-up Limousine Liberal was the 4-5 favorite in the field of 7 over 7-2 Grand Bili, winner of the Carry Back (G1), and 5-1 Catalina Red, winner of the Jackson Bend Stakes.

Jockey Joshua Navarro sent 13-1 Trouble Kid to the lead immediately and he set fractions of 21.32 and 44.31 while 2 lengths ahead of Limousine Liberal. In the lane, Trouble Kid continued to lead through 5/8 in 57.20. Limousine Liberal attempted to close but Trouble Kid held him off by a neck in 1:10.56. It was another 1/2 length back to 14-1 Bayerd third. 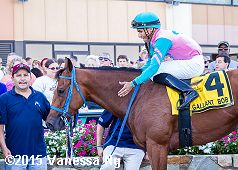 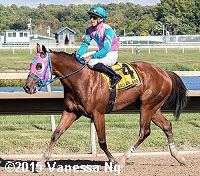 Left: Trouble Kid in the winner's circle. The 13-1 shot gained a clear lead under Joshua Navarro then held off the favorite to win by a neck.

Right: Trouble Kid returns after the race. The Ramon Preciado trainee improved his record to 3 wins, 2 seconds, and 1 third in 7 starts, earning $218,890 for owner Barbara Hopkins. 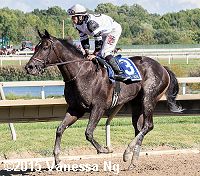 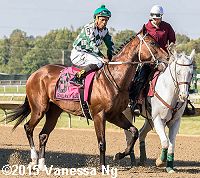 Left: Second place finisher and beaten favorite Limousine Liberal returns after the race. The 4-5 favorite stalked the pace in second under Irad Ortiz Jr., attempted to rally but just missed. The Ben Colebrook trainee improved his record to 2 wins and 2 seconds in 4 starts, earning $210,820 for owner-breeder Katherine Ball.

Right: Third place finisher Bayerd in the post parade. The 14-1 shot raced 6th 6 lengths off the pace under Ricardo Santana Jr. then rallied to get third beaten 3/4 length. The Steve Asmussen trainee improved his record to 3 wins, 4 seconds, and 2 thirds in 11 starts, earning $391,100 for owner Clark O. Brewster.