The $1 million Rebel Stakes (G2) at Oaklawn, contested at 1 1/16 miles at Oaklawn worth 50 points to the winner as part of the Kentucky Derby Championship Series, is the major local prep for the Arkansas Derby. Rain earlier in the day downgraded the track to sloppy with temperatures in the low 50's, however due to the COVID-19 pandemic, the races were conducted without spectators in the stands, infield, and on the apron.

A field of 8 three-year-olds went to post with San Vicente (G3) winner Nadal sent off as the 9-10 favorite. In to challenge him included 4-1 second choice Silver Prospector, winner of the Southwest Stakes (G3), and 9-2 third choice Basin, unraced since winning the Hopeful (G1) at Saratoga. 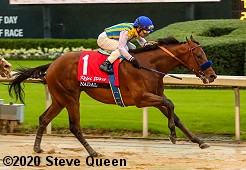 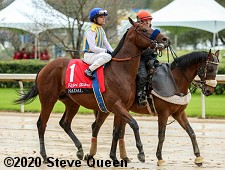 Left: Nadal in the winner's circle. Winning trainer Bob Baffert said, "We were hoping for that outcome. We knew he was a good horse, but until they go two turns … and then the way it set up, the speed duel and all. Pretty impressive when they can just keep going like that. Only the really good ones can do that. I was just fortunate that you guys even ran the race, right now with the way things are. Crazy. It's a little early, but we'll get him back here and we'll look at all of them (preps). One of them will be there (Arkansas Derby)."

Right: Nadal in the post parade. Co-owner George Bolton said, "It was an amazing effort because he was in the 1 hole and he was told to go to the lead. And when you are told to go to the lead in a 1 1/16 race, and he'd never gone around two turns, you are sending the horse into a potential oxygen debt and potential stress. When he liked turned for home and was a length or two ahead, I thought, 'You know what? He may be special. This may be a special horse and he may have the ability to go fast and then go faster.' And that's rare in a horse, to go in a Grade 2, which I considered today a Grade 1 because it's a million dollar race in front of the Kentucky Derby. He didn't waver. When the pressure hit, he stood and he took it and he accelerated." 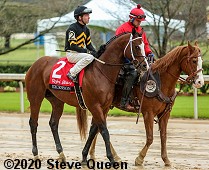 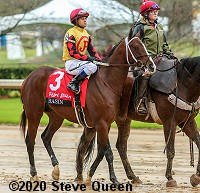 Left: Second place finisher Excession in the post parade. Jockey Tyler Baze said, "He's a really nice horse. I had the trip I wanted. I loved him last year when I first rode him when he was a maiden. He's a special animal. I can't wait until he learns how to run. He's kind of a big dummy, but I had the exact trip I wanted. I wish I would have had a clear trip, but he ran his heart out."

Right: Third place finisher Basin in the post parade. Jockey Javier Castellano said, "I liked the way he did it. He earned a good place. It was his first start since the Hopeful and his first time around two turns. It was a good test for him. I was very happy with him. He passed the test." 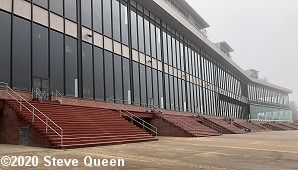 The sad looking empty grandstand since the races were held with no spectators allowed due to the COVID-19 outbreak. It is worth noting that the casino at Oaklawn remained open to the public.

Immediately before the Rebel, a field of 7 older fillies and mares went 1 1/16 miles in the $350,000 Azeri Stakes (G2), the major local prep for the Apple Blossom Handicap. Kentucky Oaks (G1) winner and Breeders' Cup Distaff (G1) third place finisher Serengeti Empress was sent off as the 9-5 favorite over Street Band, 3rd in the Houston Ladies Classic (G3), and Lady Apple, winner of the Houston Ladies Classic, both at 5-2.

After 16-1 Awe Emma reared at the start unseating Richard Eramia, jockey Joe Talamo sent Serengeti Empress loose on the lead out of the gate through fractions of 23.33, 46.49, and 1:11.34 while stalked by Lady Apple and Street Band. Turning for home Serengeti Empress left the field in her wake, opening up by 7 lengths midstretch through 1 mile in 1:37.48 and galloping out to finish 6 1/4 lengths ahead of 7-2 fourth choice Mylady Curlin in 1:44.46. It was another 3/4 length back to 49-1 Saracosa third. 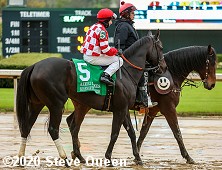 Left: Serengeti Empress in the winner's circle. Winning trainer Tom Amoss said, "I really felt like the Sam Houston race (Houston Ladies Classic) was a missed opportunity and I said that quite a few times publicly because I'm going to tell you what I think. There was no secret what the plan was going to be today. We took it to them early and she set such a blistering pace. It's the kind of pace that a lot of people would not think she could withstand, or a racehorse could withstand. But she's a little different."

Right: Serengeti Empress in the post parade. Winning jockey Joe Talamo said, "She set some legit fractions. I was surprised she went in :46 2/5 (for first half mile). She felt like :47 2/5. She has a tremendous stride. She was very impressive today and I was just fortunate to ride her. She handled the off track very well." 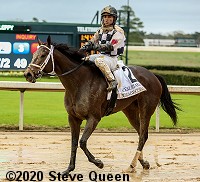 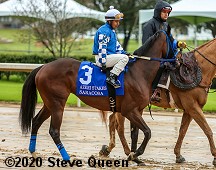 Right: Third place finisher Saracosa in the post parade. Jockey Martin Garcia said, "It's the first time she's run her. She ran really good, she had a tough competition. She broke really good but I didn't want to rush her and when she was behind the horses she didn't like the dirt on her face. When we got to the 3/8ths pole she started running, and I just got beat for second. I had a good horse. Of course, the winner had an impressive win, but she ran a really big race." 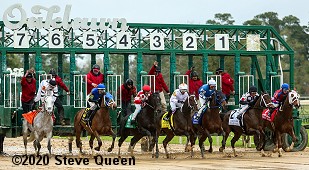 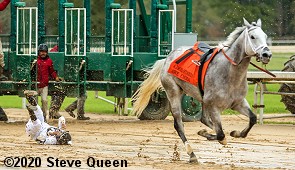 The horses break from the gate for the Azeri Stakes. You can see Richard Eramia starting to come off #7 Awe Emma then, with another view of her running off alone on the right. Both were fine.

The $350,000 Essex Handicap for older horses going 1 1/16 miles as a prep for the Oaklawn Handicap. Razorback Handicap (G3) fourth place finisher Pioneer Spirit was sent off as the 9-5 favorite in the field of 7 over 5-2 Bankit, 2nd in the Razorback, and 9-2 Snapper Sinclair, 2nd in this race last year.

Jockey Joel Rosario sent Snapper Sinclair to the lead first time by and he set fractions of 23.86, 48.50, and 1:12.97 while pressed by Pioneer Spirit and stalked by 8-1 Bravazo. Turninbg for home Pioneer Spirit gained a short lead through 1 mile in 1:37.84 but 13-2 fourth choice Night Ops, 4th early under Joe Talamo, came through between horses 3 wide and rallied to win by 1 1/4 lengths over Snapper Sinclair in 1:44.09. It was another 1/2 length back to favorite Pioneer Spirit third.

Left: Night Ops in the winner's circle. Winning jockey Joe Talamo said, "He has a big, huge stride. He handled (the sloppy track) fine. He was getting over it really well. I had a lot of horse the whole way, so it was just a matter of getting out when I could. He's one of those horses, definitely have to ride him. He doesn't give it to you easy. But when he does, he gives you everything he's got."

Right: Night Ops in the post parade. Winning owner Steve Landers said, "He ran against some good horses. We're lucky to be on top."

Right: Shortly after the start of the Essex Handicap.