The major California prep race for the Triple Crown is the $750,000 Santa Anita Derby (G1) for 3-year-olds going 1 1/8 miles over the Santa Anita main track just 4 weeks before the Run for the Roses, and worth 100 points in the Road to the Kentucky Derby. Conditions were excellent at the historic Arcadia oval, with 35,241 fans enjoying sunny skies and temperatures in the mid 60's. A field of 8 went to post on Saturday, with San Felipe (G2) winner California Chrome sent off as the 7-10 favorite over 5-2 Candy Boy, winner of the Robert B. Lewis (G2), and 9-2 third choice Hoppertunity, off his win in the Rebel (G2) at Oaklawn.

Jockey Kent Desormeaux sent 33-1 Dublin Up to the lead first time by and he set fractions of 22.89, 47.02, and 1:10.81 while pressed by California Chrome and Candy Boy. Entering the lane Dublin Up tired as California Chrome took over, quickly opening up a 5 length advantage midstretch through 1 mile in 1:35.03. Hoppertunity, fifth early, came out 3 wide for the drive but it was too late as California Chrome cruised under the line 5 1/4 lengths in front in a time of 1:47.52 over the fast track. It was another 3 1/2 lengths back to Candy Boy third. 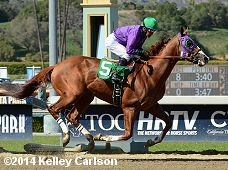 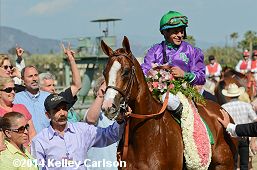 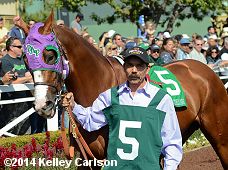 Left: California Chrome in the winner's circle. Winning trainer Art Sherman said, "I got a little spooked leaving the gate. He got banged around pretty good, but I really think he's a better horse stalking . . . when he won the San Felipe, he was on the lead all the way which is something new to me, but I really prefer this type of race where he's right off the lead. I know that the horse likes to have to have company, he's pretty competitive, he doesn't mind being hooked. Right now, he's kind of freaky and I'm enjoying it. He's my Swaps, let's put it that way. If all goes well, we'll ship to Kentucky probably a week before the Derby. I loved it when Trevor (Denman) said, 'They'd need to sprout wings' to beat him. I love that saying."

Right: California Chrome in the walking ring before the race. Winning jockey Victor Espinoza said, "He knows what's going on (when he goes to the gate). He's calm and focused, but for some reason, we missed the break a tiny bit, but I put him in the race right away. I didn't want to get stuck in traffic. It worked out well." 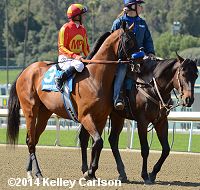 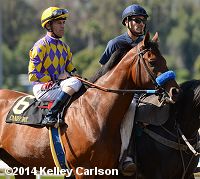 Left: Second place finisher Hoppertunity in the post parade. Trainer Bob Baffert said, "He's a really good horse (California Chrome). I was really happy with my race. I'm glad I ran my horse. He got $200,000 for finishing second. I got beat today but I'm really happy with my horse. Oh, yeah: he's going to the Derby."

Right: Third place finisher Candy Boy in the post parade. Jockey Gary Stevens said, "Candy Boy ran a super race. He was just third-best today. I know Victor got banged around at the start and we did, too. We settled down and we were comfortable, but I could see that Victor was very confident, while giving his horse a little breather. I could tell Victor was going very easy when he began to move. He moved out on the turn and the horse took off. I think my horse will continue to improve."  Trainer John Sadler added, "We'll see where the points fall and if 30 points gets us to move on, we'll move on. We think our horse likes distance. The speed today has been staying." 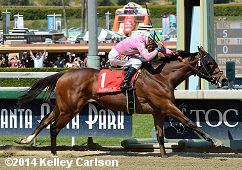 The $400,000 Santa Anita Oaks (G1) featured a field of seven 3-year-old fillies going 1 1/16 miles with the winner earning 100 Road to the Kentucky Oaks points. Breeders' Cup Juvenile Fillies (G1) winner Ria Antonia was sent off as the 6-5 favorite off her 4th place finish in the Rachel Alexandra (G3) over 2-1 second choice Fashion Plate, winner of the Las Virgenes (G1) and 5-1 third choice Arethusa, third in the Las Virgenes.

Jockey Gary Stevens sent Fashion Plate to a clear lead first time by and she set fractions of 23.75, 47.38, and 1:11.12 while stalked by 6-1 fourth choice Honey Ride. Fashion Plate continued to lead into the stretch, as favorite Ria Antonia, 4th early, moved up to challenge. However Fashion Plate easily dismissed her, winning by 1 1/4 lengths in 1:42.97. It was another 3 3/4 lengths back to 28-1 Bajan third. 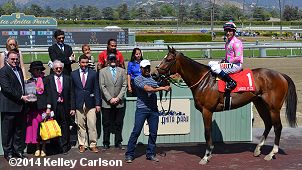 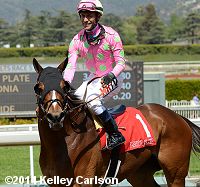 Left: Fashion Plate in the winner's circle. Winning trainer Simon Callaghan said, ""She was the speed horse, obviously, and when she was able to go the right fractions.Down the backside, Gary found time to take a little breather on her and just bring her back and then let her go again. As races go, it was a perfect ride. (Kentucky Oaks) would make sense, she's getting better almost as we stretch out in distance. She's a really smart filly and she relaxes well."

Right: Fashion Plate returns after the race. Jockey Gary Stevens said, "I've won a few races like this in my day. She was reminding me of Winning Colors going down the backside. I thought if I can keep doing this, it's going to be pretty special. (Ria Antonia) is a good filly. I've worked her a couple of times so I knew what I was dealing with. I think we were underestimated in here though, off her numbers last out. We knew that she was going to improve a lot today." 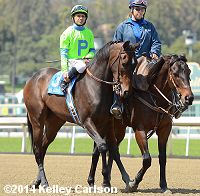 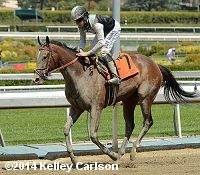 Left: Second place finisher and beaten favorite Ria Antonia in the post parade. Jockey Mike Smith said, "My horse ran a tremendous race today. I can't complain. I really thought we had (Fashion Plate) measured in the turn and we would get there. We really got beat by a good filly. I think we would have had to be 110% today to beat that horse. I really think our horse probably needed two races before this race. She should be better next time."

Right: Third place finisher Bajan returns after the race. Jockey Joe Talamo said, "We had a great trip, she ran great and she handled the kick-back well. She did everything I asked, very classy. I think she has a bright future. I do think it's a speed-favoring track today. If you look at the races so far, it's hard to come from off the pace but I'm certainly hoping to do it later on!" 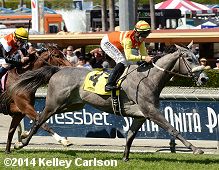 The $150,000 Providencia Stakes (G3) featured three-year-old fillies going 1 1/8 miles on the turf. Undefeated Diversy Harbor was sent off as the 11-10 favorite in the field of 10 off her win in the China Doll Stakes. In to challenge her included 5-2 second choice Nashoba's Gold, runner-up in the China Doll, and 7-1 third choice One More, winner of her last two in allowane company. 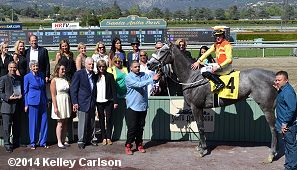 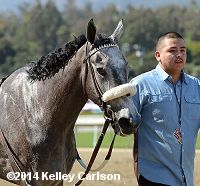 Left: Nashoba's Gold in the winner's circle. Winning trainer Carla Gaines said, "My filly's just maturing. She's learning, but it was a great race and a great ride. I'm so excited."

Right: Nashoba's Gold returns to the barn after the race. Winning jockey Joe Talamo said, "We just had a perfect trip. I had a lot of horse. I just wanted to keep her out of any trouble. I kept her three or four wide and everything worked out great and we were able to turn the tables today. She is a very special animal." 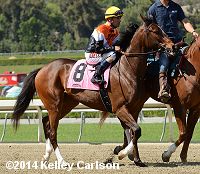 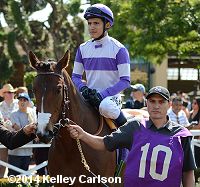 Left: Second place finisher and beaten favorite Diversy Harbor in the post parade. Jockey Gary Stevens said, "My horse has been great. I really thought I had made a good tactical move going into the turn, but I got through too late.  It might have been different if I had decided to go wide."

Right: Third place finisher One More in the walking ring before the race. The 7-1 third choice stalked the pace under jockey Mario Gutierrez, but could not improve late finishing third beaten 3 1/2 lengths. The Doug O'Neill trainee improved her record to 2 wins, 1 second, and 1 third in 7 starts, earning $92,370 for owner Reddam Racing. 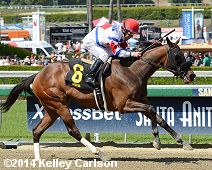 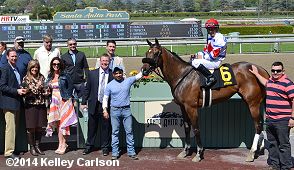 Winning trainer Mike Machowsky said, "She just keeps getting better and better.  Victor has done a great job.  She has been running against some fine horses.  She has been grinding it out and has really blossomed.  We have a ton of options for her.  We definitely are looking at Cal Bred options, but if there is a nice spot for a graded race we'd like to try that." 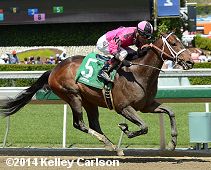 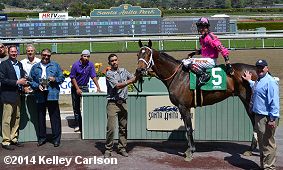 Winning jockey Tyler Baze said, "He's a nice horse. He'll do anything, dirt, synthetic, any distance, anything! I wanted to break sharp, which he did, because I wanted to keep close to the pace. Halfway down the backside I had a chance to ease him out of the tight spot we were in and give him a breather. He took a deep breath going into the far turn and I said, 'it's time to go!' I didn't know how he would take getting dirt kicked in his face; he's never had to, but it didn't bother him. He's a phenomenal animal, he's professional."