The highlight race of the Santa Anita winter-spring meeting is the $1 million Santa Anita Handicap (G1), featuring the best older handicap horses on the west coast going 1 1/4 miles over the main track in Arcadia before 27,259 fans in attendance. Conditions were excellent with clear skies, a fast track and temperatures in the high 60's. Breeders' Cup Classic (G1) runner-up Effinex was sent off as the 7-5 favorite in the field of 9 off his win in the Clark Handicap (G1). In to challenge him included 5-2 second choice Donworth, third in the San Antonio (G2) last out, and 4-1 third choice Imperative off three runner-up finishes incluidng the San Pasqual (G2) and San Antonio.

Jockey Joe Talamo sent 16-1 longshot Melatonin to the lead and he set quick fractions of 22.82, 46.28, and 1:10.81 while pressed by 7-1 General a Rod and stalked by Effinex and Donworth. Entering the lane, Melatonin began to open up on the field, extending his lead to 1 1/2 lengths at the top of the stretch through 1 mile in 1:36.47. 23-1 Hard Aces, 7th early, came out 3 wide for his rally but Melatonin, under a handride, drew off to an impressing 4 1/4 length gate-to-wire victory in a time of 2:02.01. It was another 1/2 length back to Effinex third. There was a brief inquiry into an incident on the far turn involving 7th place finisher Donworth who clipped heels with Melatonin but the stewards ruled he caused his own trouble, leaving the result unchanged. 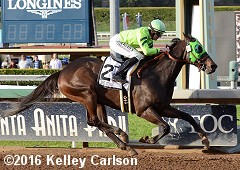 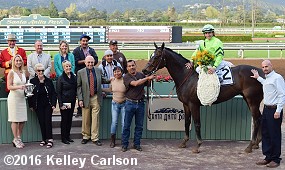 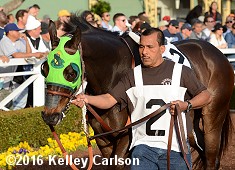 Left: Melatonin in the winner's circle. Winning jockey Joe Talamo said, "What a tremendous effort. I think I need some Melatonin right now to calm down from it. He broke real sharp and I just put him up there and fortunately he was going so easily. When I got to the first turn, they backed off him a bit so I was able to give him a breather and he opened up turning for home. I felt Mario (Gutierrez riding Donworth) clip heels with me but I was more surprised, there wasn't much room in there. I wasn't aware that he was having any trouble with his horse."

Right: Melatonin in the paddock. Winning trainer David Hofmans said, "After his last race (Talamo) said we have to run here. Joe was convinced after his last race. He said he loves this race track, he's so strong and he had so much horse left, I think he wants to run even farther, and I was convinced he was a miler. I breezed him 7/8 the other day with Joe and was convinced to go here. Without California Chrome, it opened it up. We expected to be on the lead." 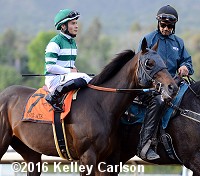 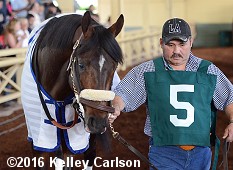 Left: Second place finisher Hard Aces in the post parade. Jockey Abel Lezcano said, "I thought we were taking that last turn really well, up towards the front we were really slowing down which didn't make me too happy. Coming out I provoked him a bit, got him going and was able to maintain good speed but in the end it wasn't enough."

Right: Third place finisher and beaten favorite Effinex in the paddock. Jockey Mike Smith said, "That was his first race in just over three months, going 1 1/4. That was impressive. You can't ask for much better. That's all it was and that's what it felt like. He got to them and I thought we had them, but by the 3/8 pole I felt him take a big breath and once he got his air he didn't put his head back down and take off again."


Kicking off the graded stakes quartet on Saturday was the $400,000 Frank E. Kilroe Mile (G1) for older horses going 1 mile on the turf. Arcadia Stakes (G2) winner Bolo was sent off as the 2-1 favorite in the field of 6. In to challenge him included 5-2 second choice Bal a Bali, third in the San Gabriel Stakes (G2) last out, and 7-2 third choice Midnight Storm, winner of the Seabiscuit Handicap (G2).

Jockey Kent Desormeaux sent 6-1 shot What A View to the lead first time past the stands she he set fractions of 22.65, 46.25, and 1:10.17 over the good turf course while pressed by 36-1 longest shot Kenjisstorm and stalked by Om. At the top of the stretch, What A View powered clear of the field, opening up by 4 lengths midstretch through 7 furlongs in 1:22.64. Bolo, last through the first 5 furlongs, came out 4 wide into the lane and put in a strong rally but was left with too much ground to recover as What A View cruised to a 3 3/4 length victory in a time of 1:35.57. It was a nose back to Bal a Bali third. 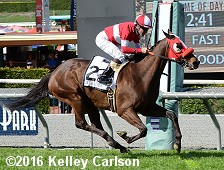 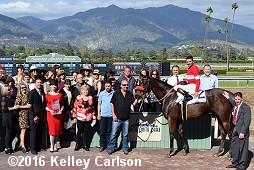 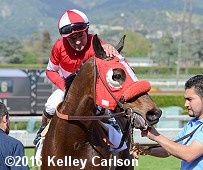 Left: What A View in the winner's circle. Winning trainer Kenny Black said, "We've had some issues with his feet and I just wanted to keep him on the grass. There were some really tough horses in here: Bolo, Bal a Bali and Om, so we knew we were going to have to run big to win."

Right: What A View returns after the race. Winning jockey Kent Desormeaux said, "I thought that if they all wanted to come at him, then he'd run them into the ground and I wanted to try and win the race that way. He was loaded turning for home. He was enjoying himself and I think he enjoyed the soft ground. The time is incredible because the turf has a tremendous amount of give in the ground. For him to put that number up on the clock, he's a real racehorse." 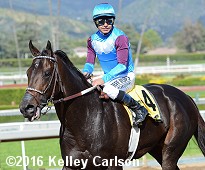 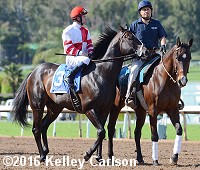 Left: Second place finisher and beaten favorite Bolo returns after the race. Jockey Mike Smith said, "I think anybody that was going to lay close (to What a View) was just going to shoot themselves in the foot. To be honest, I think that helped us run second. If I had tried to lay close, I wouldn't have run second."

Right: Third place finisher Bal A Bali in the post parade. Jockey Flavien Prat said, "My horse ran good, the horse ran his race and did well. I feel that I got a good race, he had his shot and ran his race well. I don't need to make an excuse for him, he did well."


Thhe $400,000 San Felipe Stakes (G2) is the major local prep for the Santa Anita Derby (G1) and is a points-scoring race in the Kentucky Derby Championship Series. A field of 6 three-year-olds faced the starter in this 1 1/16 mile trip, with Robert B. Lewis (G3) winner Mor Spirit sent off as the 8-5 favorite over 2-1 Exaggerator, fourth in the Breeders' Cup Juvenile (G1) and second in the San Vicente (G2) last out, and 3-1 Smokey Image, undefeated in 6 starts including the California Cup Derby.

Jockey Mike Smith sent 11-2 fourth choice Danzing Candy to the front first time by and he was loose on the lead through fractions of 22.96, 46.11, and 1:11.04 while as many as 2 lengths clear of 24-1 longest shot Uncle Lino and 14-1 I Will Score. Entering the stretch, Mor Spirit and Exaggerator moved up to challenge, but Danzing Candy easily held off Mor Spirit by 2 lengths in 1:43.04. It was another 3/4 length back to Exaggerator third. 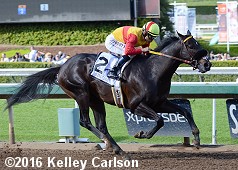 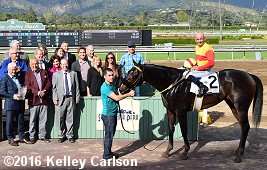 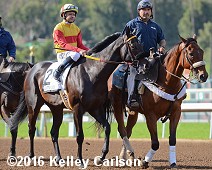 Left: Danzing Candy in the winner's circle. Winning jockey Mike Smith said, "We wanted to play our hand right off the bat. Let's go to the lead and if they want to go with us, we'll be probably be going too fast and if that's the case, we were going to worry about it next time. I left there very aggressive and he didn't get away with anything. If you go twenty-two on this track today, you're smokin'. And for him to hold off the caliber of horses he held off, was very impressive. He's still carrying a lot of flesh on him. There's room to trim him down as we get closer to the Derby and we're doing it little by little. He's handling everything. He's a big, beautiful horse and he'll start tucking up as we get closer."

Right: Danzing Candy in the post parade. Trainer Clifford Sise Jr. said, "He left much better today. I expected him to be on the lead. He's good now. We'll stay for the Santa Anita Derby. He's three for three on this track. Why would we change now? I don't see any reason to, but you never know. You've got to leave that up to the owners." 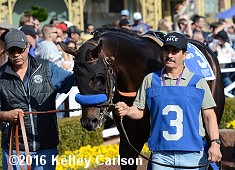 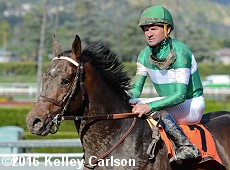 Left: Second place finisher and beaten favorite Mor Spirit in the paddock. Trainer Bob Baffert said, "He ran well. The horse that won is a pretty good horse. I wanted to run first, second or third. He's coming on. 1 1/8 miles will be more to his liking, but he got a lot out of it today. I'm happy with the way he went and we're learning more about him. He'll stay here for the Santa Anita Derby."

Right: Third place finisher Exaggerator returns after the race. Trainer Keith Desormeaux said, "He ran nice and steady. They were quick the first part of the race. He was sitting chilly and relaxed. I loved the way it set up, but he didn't finish. I would like to think he'll move forward off of this. He might be maxing out at a mile, too. We'll stay here for the Santa Anita Derby, try them again and try and prove me wrong."

Jockey Joe Talamo sent 50-1 longest shot Mystery Train to the lead exiting the chute and he set fractions of 22.79 and 45.16 while pressed by 31-1 Outside Nashville and stalkesd by 9-2 fourth choice San Onofre. Turning for home 10-1 Cautious Giant, 4th early, swept three wide to take the lead through 3/4 in 1:09.84. However, Kobe's Back, last for the first half mile, came out 4 wide into the stretch and rallied strong under Gary Stevens to win by 1 1/2 length over late running 13-1 Coastline in 1:22.20. It was 1/2 a length back to Calculator third. 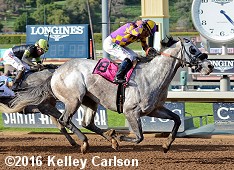 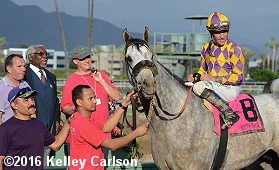 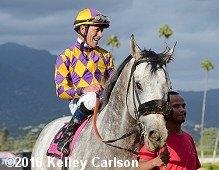 Left: Kobe's Back in the winner's circle. Winning jockey Gary Stevens said, "It was the best he's ever broken. I've been aboard him in a couple of workouts in the mornings, before his last race and again last week and there have been a few times that he's wanted to go after horses in front of him and I've let him. He's running on the turn so he's gaining ground and doesn't have to work so hard in the stretch. It gives me a lot of confidence. I knew at the half-mile pole that they were all in deep water and that's a pretty good feeling."

Right: Kobe's Back returns after the race. Winning trainer Peter Eurton said, "Did you see how he came out of the gate? He broke too fresh, and that was good. He's just good right now. He's the best he's been in so long. Gary hustled him a little bit and then he kind of let him fall back." He will start next in the Churchill Downs Stakes (G2) on the Kentucky Derby undercard. 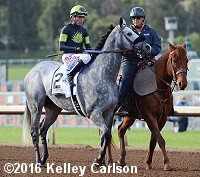 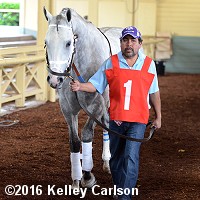 Left: Second place finisher Coastline in the post parade. Jockey Tyler Baze said, "I really kind of let him run his race. I wanted to be patient with him going from 6 1/2 down the hill to 7/8, I think the distance is never a question with him, but I wanted to make sure I timed it right – especially when I had to thread the needle through a haystack. He ran really good."

Right: Third place finisher and beaten favorite Calculator in the paddock. Jockey Flavien Prat said, "I had a good race, he had his shot and he was a little bit aggressive on the back side. That's my only regret but overall, we had a good trip. He's a good horse and he's going to improve anyway so I'm happy with that race." 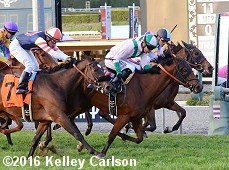 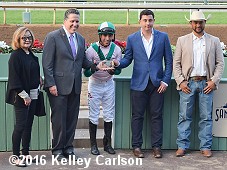 The Simon Callaghan trainee improved her record to 3 wins, 1 seconds, and 0 thirds in 7 starts, earning $112,768 for owner Mrs. Fitriani Hay.