The feature race on the first Sunday of the Del Mar summer meeting is the $200,000 San Clemente Handicap (G2), a 1 mile turf contest for older fillies and mares. Conditions were excellent with sunny skies and temperatures in the mid 70's for the 11,757 fans on hand. Sircat Sally was sent off as the 7-5 favorite, undefeated in her 7 career starts including the Honeymoon Stakes (G2) last out. In to challenge her included 9-5 second choice Lull, second in the Soaring Softly Stakes at Belmont Park, and 8-1 third choice Enthrall, making her American debut after winning the Prix Saint Nicolas d'Acy at Chantilly last out. 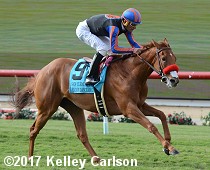 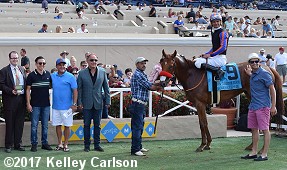 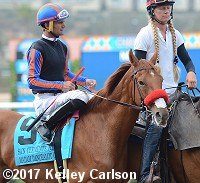 Left: Madam Dancealot in the winner's circle. Winning trainer Richard Baltas said, “The way she was finishing the last two races on the grass down the hill at Santa Anita, I thought she could get a mile. She’s settled now, she’s relaxed and when she was last down the backside, I was like ‘Wow.’ I know she can run and when a good horse gets settled like that they’re going to run at the end, and she did.”

Right: Madam Dancealot in the post parade. Winning jockey Jamie Theriot said, “No special instructions here; I just rode the race as it came up. The key with her was to get her to relax. She’s coming off races down the hillside (at Santa Anita) and she’s got speed, but she needed to relax. I worked her last week and she relaxed fine for me, so I was feeling good coming into this race. When we turned for home, I thought she was really going to finish strong for me. And she surely did.” 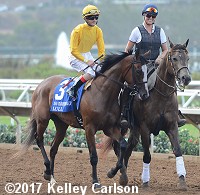 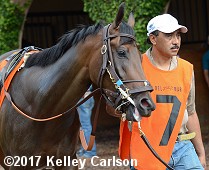 Left: Second place finisher Lull in the post parade. Jockey Brian Hernandez Jr. said, “The plan actually was to take her back and cover her up. But she broke so well and nobody else was going, so I just let her run along up there. She was going easy and turning for home I thought I was a winner. But that other filly (Madam Dancealot) was really motoring and she just went on by.”

Right: Third place finisher and beaten favorite Sircat Sally in the paddock before the race. Jockey Drayden Van Dyke said, “I pulled her up on the backside and got off her. It felt to me like she was maybe a little off in her right front. It didn’t seem to be anything serious, but I didn’t want to take any chances. She usually gives me a big kick at the end, but it wasn’t there today. Maybe something was going on during the race, though she didn’t show it. I think she’s going to be OK.” X-rays revealed a sesamoid fracture that may not require surgery, so she was retired.