The feature race on Saturday at Del Mar was the $200,000 San Diego Handicap (G2) for older horses at 1 1/16 miles on the main track. Conditions were excellent at the seaside oval for the 30,049 fans in attendance, with sunny skies and temperatures in the high 70's. Breeders' Cup Classic (G1) winner Bayern was sent off as the 7-5 favorite in the field of 7 off his last place finish in the Metropolitan Handicap (G1). In to challenge him included 5-2 second choice Hoppertunity, second in the Gold Cup (G1) after finishing third in the Stephen Foster (G1), and 3-1 third choice Catch a Flight, third in the Gold Cup and the Santa Anita Handicap (G1). 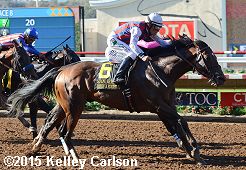 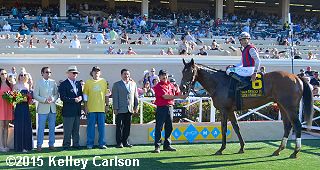 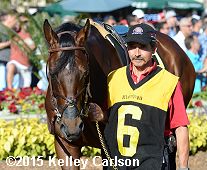 Left: Catch a Flight in the winner's circle. Winning trainer Richard Mandella said, "He won a lot of races in Brazil, not against the highest competition, but it gave him a good bit of experience. He came here and he just keeps getting better and better. He was meant to sit back, but it looked like they were kind of getting away from him at the last turn and I was a little worried. But I guess they used themselves enough that he caught them. The Pacific Classic is next."

Right: Catch a Flight in the paddock before the race. Winning jockey Gary Stevens said, "He warmed up differently today. He was chilled out. He must like this Del Mar weather. I had real confidence in him today. He's run in the U.S. seven times now against good horses and he's shown up every time. He's a treat. We got the great set-up today and I rode him better (than last time in the Gold Cup when he finished third). I think this race should set him up nicely for the Pacific Classic. I don't think distance is a big thing with this horse; he can handle that. He just needs the set up, and we got it today. I could see Martin (Garcia on Bayern) was out of horse at the 3/8. I was just hoping that Joe (Talamo on Appealing Tale) would come back to me. He did, just enough and my horse was good enough." 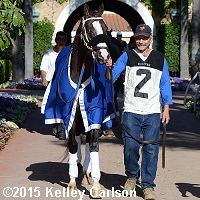 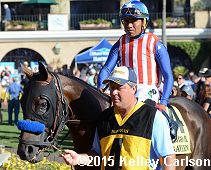 Right: Third place finisher Bayern in the paddock before the race. Jockey Martin Garcia said, "He didn't try. I don't know if something's wrong, but he didn't try." 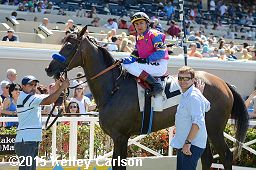 Big Book in the winner's circle. Winning trainer Tim Yakteen said, "It was a moderate pace and I think that's why they all lined up (in the early going). When you've got Rafael (Bejarano) riding you don't need to give him directions and he knew what to do. She didn't run as a 2-year-old because she's a big filly and she needed time to mature and grow into herself."