On Saturday August 3rd was the biggest day of the Saratoga meeting so far, with 42,379 on hand to witness the Grade 1 Whitney Handicap for the older horses at 1 1/8 miles, and the Grade 2 Amsterdam for the sprinters over 6 furlongs. In both events, defending Saratoga riding champion and current leader Jerry Bailey rode the favorite, but he failed to score. In fact he only won one race on the entire card, a claimer early in the afternoon.

In the main event, the Whitney Handicap, Godolphin Racing's Street Cry was sent off as the even money favorite, coming off victories in the Group 1 Dubai World Cup and the Grade 1 Suburban. Five others faced the starter in this $750,000 event including Lido Palace and Macho Uno who were second and third in the Suburban last out and Left Bank who just won the 7 furlong Grade 2 Tom Fool last out.

When the gate opened, long shot Saint Verre was sent to the front to lead the procession for the first six furlongs, setting very fast fractions of 23.00, 45.94, and 1:09.36 before tiring to a last place finish. Second choice Left Bank pressed the pace on the outside and the pair of speedsters were as much as 7 lengths clear of the competition, including Street Cry who was unhurried in third early, saving ground on the rail. With Saint Verre stopping badly, Left Bank quickly drew 2 1/4 lengths clear of Street Cry, who inherited second in mid stretch after a mile in 1:34.19, and would hold off his late rush to finish 1 1/4 lengths in front. The final time of 1:47.04 over the fast main track equalled the track record set by Tri Jet 28 years ago. It was Left Bank's second track record performance in a row, having set the 7 furlong record at Belmont in the Tom Fool Stakes his last time out. Third choice Lido Palace finished third having raced wide the whole way round in fourth position. 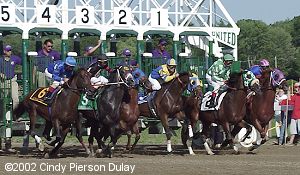 The horses break from the gate in the Whitney Handicap and long shot Saint Verre goes for the lead. Winning trainer Todd Pletcher said, "We assumed that Saint Verre was going to show speed, but you don't want to take anything for granted. The fractions were fast, but [Left Bank] was far enough behind and far enough ahead of the rest of the field and he was traveling comfortably.

In deep stretch with Left Bank out front and Street Cry and Lido Palace battling it out for second. Winning jockey John Velazquez said, "I asked him to pick it up at the 3/8 pole. He picked the bit up and rolled. He stays like this, he can go anywhere and beat anyone." 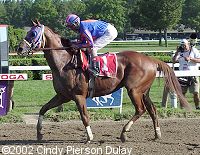 Left Bank returning after winning the Whitney. Trainer Pletcher said, "I was concerned about the distance against this quality of horses. This was the best group of horses put together all year. The race set up for everybody and nobody had an excuse. I think the best horse won." 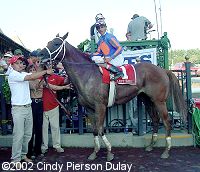 Left Bank in the winner's circle. Pletcher said of Left Bank's future, "Now, the logical thing would be to come back in the Woodward. If things go well there, we'll take a look at the Jockey Club Gold Cup and the Breeders' Cup Classic. We'll enjoy this one for now." 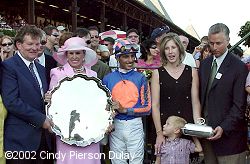 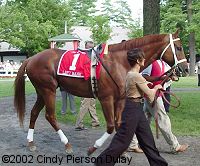 Left Bank in the paddock before the race. 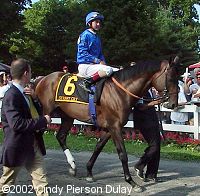 Favorite and second place finisher Street Cry on the way to the post parade. Trainer Saeed bin Suroor said, "I was very disappointed with this race because he trained so well coming up to it. There was a good pace to set up for him. I was happy with the ride Jerry [Bailey] gave him. The horse just didn't look happy. I could tell in the last two furlongs that he was not going to win." 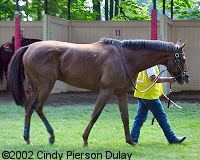 Third place finisher Lido Palace in the paddock. Jockey Jorge Chavez said, "Our horse really tried hard. I don't blame him. I am just happy with the way he finished." 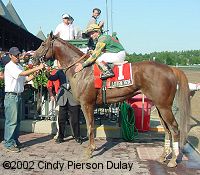 Listen Here in the winner's circle. Trainer Bill Mott said, "This horse has been knocking on the door with seconds and thirds. He's run some credible races, but hasn't really gotten the job done. Everything fell into place today. At the 3/8 pole, he started to pick up some momentum. When he swung for home, I said `Hell, I know how fast they've been going up front,' and with the momentum he had, it looked like he had a chance." He will make his next start in the King's Bishop Stakes on Travers Stakes day. 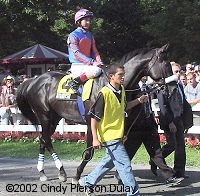 Santa Anita Derby runner up Mayakovsky was the heavy favorite but faltered in the stretch to finish fourth. Jockey Jerry Bailey said, "We were there early and out-run late." Trainer Patrick Biancone added, "I'm not overly disappointed with the race; we were giving eight pounds to some horses in here. He looked good coming back. We'll see how he does before deciding on the King's Bishop." 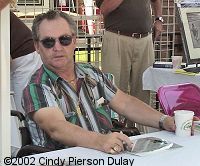 Secretariat's jockey Ron Turcotte was on hand at Saratoga today to sign autographs for fans. 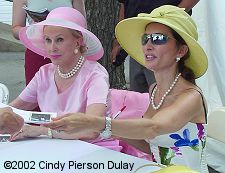 Mary Lou Whitney, whose family the Whitney Handicap is named for, and "All My Children" star Susan Lucci were signing autographs for the disabled jockeys fund.