The first graded stake on Arlington Million Saturday was the $400,000 Secretariat Stakes (G1) for 3-year-olds going the Million distance of 1 1/4 miles on the turf. A field of 13 went to post with Transylvania (G3) winner Analyze It sent off as the 4-5 favorite coming here off 2nd place finishes in both the Pennine Ridge (G2) and Belmont Derby Invitational (G1). In to challenge him included 11-4 second choice Hunting Horn, 3rd in the Belmont Derby after winning the Hampton Court (G3) at Royal Ascot, and 12-1 third choice Untamed Domain, runner-up in last year's Breeders' Cup Juvenile Turf (G1) and 6th in the Kent (G3) last out. 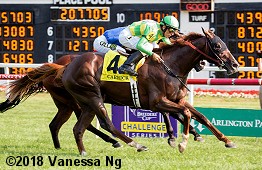 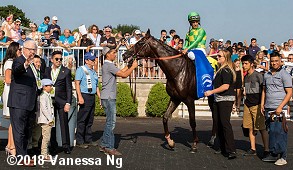 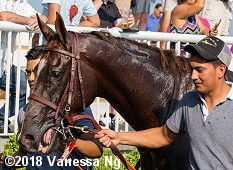 Left: Carrick in the winner's circle. Winning owner Jerry Crawford said, "We were confident. We knew he'd run well, but to beat this field is really extraordinary. We may have just set a record with the number of young people in the winner's circle. We invited them all. It's a little emotional, to be honest. We won this race with Paddy O'Prado. I said before we started today that you get to be world champion for a day if you win this race. Thank you to Arlington, one of the classiest places in the world. Thank you to Mr. Duchossois, who has meant so much to this sport. And how about my team of (trainer) Tom Morley and John Velazquez?"

Right: Carrick heads back to the barn. 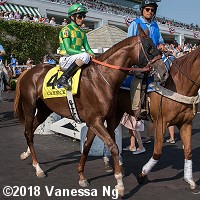 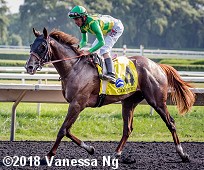 Left: Carrick in the paddock before the race. Winning jockey John Velazquez said, "He broke well and going past the wire for the first time he settled really well. By the backstretch I was in a perfect position and I was very happy with the way he was doing things. After that, really, I was just waiting for the stretch run to see how he would respond for me and he responded, and he responded right away. I wanted to wait a little longer and not make a premature move, but he handled it very well. I rode him last time out at Delaware and had a horrible trip. I broke a little slow and then tried to put him as close as I can. I had to ask him a little bit after he broke slow and he then got rank and I got into a ton of trouble."

Right: Carrick heads out to the track before the race. 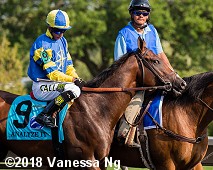 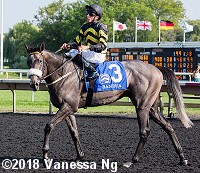 Left: Second place finisher and beaten favorite Analyze It in the post parade. Jockey Jose Ortiz said, "My horse ran good. It might be farther than he wants to go, but he tries. He hasn't disappointed and he performed really well."

Right: Third place finisher Bandua returns after the race. Jockey William Buick said, "He just got a little outpaced. Had a lovely run through the race and he's a nice horse. The front two just kind of kicked clear of me and he was just getting his rhythm going. He's a nice horse and he's one that's going to keep improving, as well." 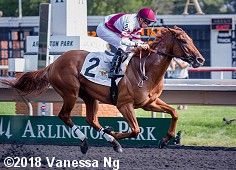 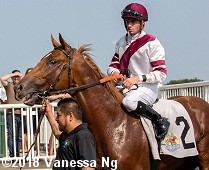 Winning trainer Tony Mitchell said, "You know what was so good about it was just to see how much horse he had underneath him and he could go anytime. When the gap opened up and he found the gear to go through but then he kept running. That's what I've tried to get from him in his other races. And what's ironic is his best races are stakes races, so maybe I'll have to look for another stakes race. He just looked so powerful and 'Frenchy' (Geroux) did a helluva job. We knew this was a talented horse, he just hadn't shown it in every race; today, he showed it."

On to the Arlington Million won by Robert Bruce
On to the Beverly D. won by Sistercharlie