The $500,000 Suburban Handicap (G2) features the top older handicap horses of the east going 1 1/4 miles on the Belmont Park main track, in an early prep for the Whitney Handicap (G1) and ultimately the Breeders' Cup Classic (G1). Last year's Belmont (G1) and Jockey Club Gold Cup (G1) winner Tonalist was sent off as the 2-5 favorite in the field of 6 off his 2nd place finish in the Metropolitan (G1). In to challenge him included 7-2 second choice Coach Inge, winner of the Brooklyn (G2), and 13-2 third choice Effinex, who failed to finish the Brooklyn. 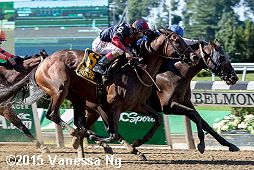 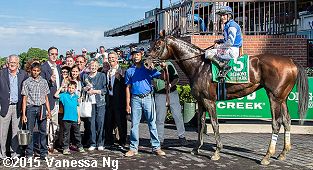 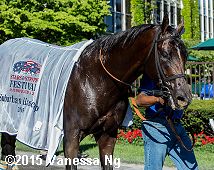 Left: Effinex in the winner's circle. Winning trainer Jimmy Jerkens said, "During the stretch run, I was just happy he was going to run good. If he got beat by Tonalist, that wasn't going to be a crime. And then when he gutted it out, golly, and Junior got the stick over in his left hand, and that's what made the difference. The horse was in a better frame of mind. We didn't train him quite as hard. I guess we'd look at the Whitney or the (Woodward) but anything can happen. Today was great for him, a New York-bred."

Right: Effinex heads back to the barn after the race. Winning jockey Junior Alvarado said, "They went really fast up front, which helped me to not fight with him too much, because he can be a little tough. I just tried to save ground as much as I could, and by the five-eighths pole I saw Johnny (Velazquez, aboard Tonalist) start to pick it up a little bit, so I kind of moved a little bit just to make sure I still had a good position, but I didn't want to move that early. I just waited a little bit and when we turned for home I saw Johnny push and push, but I didn't see (Tonalist) picking it up. 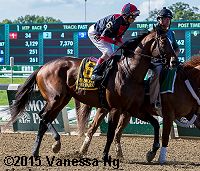 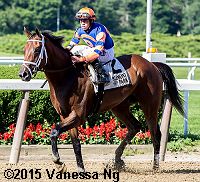 Left: Second place finisher and beaten favorite Tonalist in the post parade. Jockey John Velazquez said, "We broke slow and I put him right behind the other horses. He was pretty good on the backstretch. We got in between horses. A horse hit him on the side a little bit and I got him forward but he just didn't have enough today."

The $500,000 Dwyer Stakes (G3) featured a field of 7 three-year-olds going 1 mile around one turn of the main track. Breeders' Cup Juvenile (G1) winner and San Vicente (G2) runner-up Texas Red was sent off as the 9-5 favorite over 2-1 Speightster, undefeated in 2 starts lifetime, and 7-2 Tommy Macho, winner of his last 2 in allowance company. 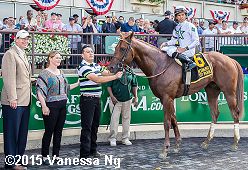 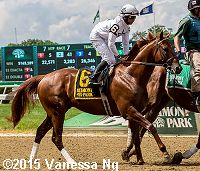 Left: Speightster in the winner's circle. Winning trainer Bill Mott said, "We identified him as a nice 2-year-old last year, and then we had to give him time because he had bucked his shins. We sent him home for a good while and finally got him back to the races, and he's been perfect. He's 3-for-3 and he's done it the right way every time. If we're looking at Saratoga, we're thinking King's Bishop as a possibility. I thought he ran against a very nice group of horses today. The sky's the limit."

Right: Speightster in the post parade. Winning jockey Jose Lezcano said, "I got a very good trip. I had a clean break and I sat in second. When I asked him, he really took off. I don't know how good he is; every time I ask him for more, he gives it to me. Even galloping out, he galloped out in front of everybody. He did it easy." 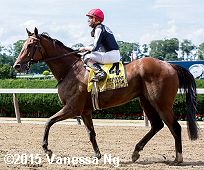 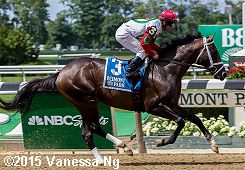 Left: Second place finisher and beaten favorite Texas Red returns after the race. Jockey Kent Desormeaux said, "He was full of run. I was going faster under the wire than I was at the quarter-pole. It was a very encouraging comeback. At the 1/4 pole, I thought he was a stone winner. He had to shade :24 coming home, and the winner did too. This race ought to set him up nicely."

Right: Third place finisher Tommy Macho crosses the finish line. The 7-2 third choice Raced 2 lengths off the pace in 5th under Javier Castellano, then pssed tiring horses to get third beaten 5 lengths. The Todd Pletcher trainee improved his record to 2 wins and 2 thirds in 4 starts, earning $162,200 for owners Paul Pompa Jr. and All American Horses LLC.


Kicking off the stakes action on Saturday, a field of 6 three-year-old fillies sprinted 6 1/2 furlongs in the $150,000 Victory Ride Stakes (G3). Jersey Girl Stakes runner-up Enchanting Lady was sent off as the 6-5 favorite over 3-1 Promise Me Silver, winner of the Eight Belles (G3), and 7-2 Miss Ella, 7th in the Acorn (G1) last out.

21-1 Super Saks was quickest away through fractions of 22.01 and 45.62 while pressed by 11-1 Kathballu. At the top of the stretch 5-1 fourth choice Irish Jasper, 4th early, moved up 4 wide to gain the front. Kept to task by Javier Castellano, Irish Jasper drew off to win by 3 lengths over late-running favorite Enchanting Lady in 1:16.70. It was another 2 3/4 lengths back to Kathballu third. 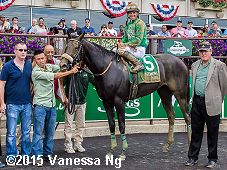 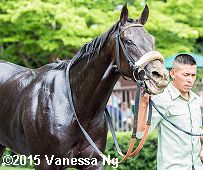 Left: Irish Jasper in the winner's circle. Winning owner-trainer Derek Ryan said, "I think she's the best 3-year-old filly in the country. The seven-eighths is going to be perfect for the Test Stakes; that's the next thing for her. We'll see where we are after that. I bought her off a friend of mine last year in Ocala, and it worked out great."

Right: Irish Jasper heads back to the barn after the race. Winning jockey Javier Castellano said, "She broke well out of the gate and put me in a good spot. There was a lot of speed in the race. I learned from the first time I rode her and it paid off today. Phenomenal filly. She did it the right way today and I give all the credit to Derek Ryan to put me on the horse, because anybody could ride that horse." 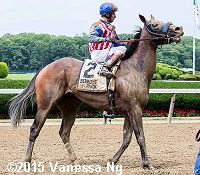 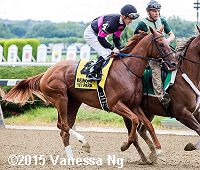 Left: Second place finisher and beaten favorite Enchanting Lady returns after the race. The 6-5 favorite raced 6 lengths off the pace in 5th under John Velazquez then rallied to get second beaten 3 lengths. The Bob Baffert trainee improved her record to 2 wins, 3 seconds, and 0 thirds in 7 starts, earning $196,280 for owner Kaleem Shah.