The highlight of the Saratoga meeting is the $1.25 million Travers Stakes (G1), featuring the best 3-year-olds on the east coast going 1 1/4 miles on the main track. After 1 scratch, a field of 13 faced the starter on Saturday afternoon with 48,630 on hand under sunny skies with temperatures in the low 80's. As expected Santa Anita Derby (G1) and Preakness (G1) winner Exaggerator was sent off as the 5-2 favorite off his win in the Haskell Invitational (G1). In to challenge him included 5-1 second choice American Freedom, second in the Haskell after winning the Iowa Derby (G3), and 7-1 third choice Destin, second in the Belmont (G1) then third in the Jim Dandy (G2).

Jockey Mike Smith sent 11-1 Arrogate to the front first time past the stands and he set fractions of 23.23, 46.84, and 1:10.85 while pressed by American Freedom and stalked by 18-1 Laoban. Entering the stretch, Arrogate began to open up on the field, extending his lead to 2 lengths at the 1/4 pole after 1 mile in 1:35.52. Under Smith's vigorous handride, Arrogate powered away from the field, finishing up 13 1/2 lengths ahead of American Freedom in a new track record time of 1:59.36 over the fast main track. It was another 1 1/2 lengths back to 9-1 Gun Runner third, while favorite Exaggerator trailed early and failed to rally, checking in 11th beaten 33 lengths.

Previous winners of the Travers 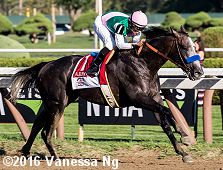 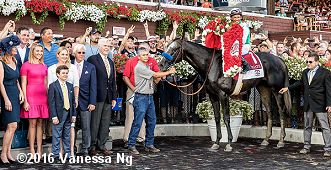 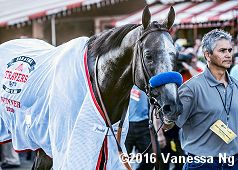 Left: Arrogate in the winner's circle. John Chandler, president of owner Juddmonte Farms USA said, "We haven't run many good horses in our racing in this country. We've had a few very nice horses, but this is obviously the best colt we've had. To a lot of people's surprise, the horse came up and kept going with a staggering fast time, and obviously, a very good horse and very good trainer, and we're very happy with him. We're very pleased with the job that Bob has done. He's just done great things with the horse and been very patient with him, and we thank him very much."

Right: Arrogate heads back to the barn. Winning trainer Bob Baffert said, "My wife Jill said, I think they're going too fast. I said, no, they look like they're going easy. But when I heard 46 and change, I think he can handle it. He's a big long-striding horse. They didn't look like they were going that fast. I left it up to Mike to ride his own race. Big money Mike, you just throw him on there and let him do his thing. He knows the horse. He knows this track. That was a pretty big jump that he made today. I'm sure that all his buyers and sheet numbers are going to be off the chart. There's no rush. I think that he's the kind of horse that, after what he did today, he could go into the Breeders' Cup fresh like (American) Pharaoh did. I don't think that's a big problem for him. I think that, what he did today, he deserves a little break." 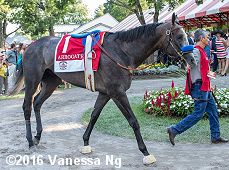 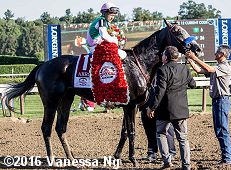 Left: Arrogate in the paddock. Winning jockey Mike Smith said, "He actually jumped (out of the gate) very well. After that, once he got up underneath himself, he has a stride that's tremendous, as you saw. Although we were going quick, he was doing it well within himself. When I asked him down the lane, he responded. Very blessed that (Baffert) chose me to ride this horse today and just happy to be there. The guy that got to keep the weight on his back, to be honest with you. He was ready."

Right: Arrogate with his flower blanket. Baffert added, "Every time you looked up and you saw these (Juddmonte) colors, it was Bobby Frankel, one of the greatest trainers ever. To me, it was a very emotional win for me to see those colors. I feel like I finally made it in this business. I felt like I was in the Kentucky Derby today. It was that kind of pressure. I'm just thankful -- last year, we were supposed to do this last year. It just didn't happen. It didn't work. Everything happens for a reason, unfortunately, but I'm just glad to be back here." 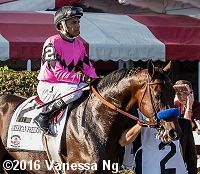 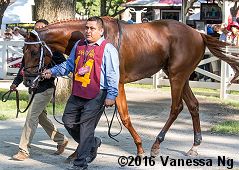 Left: Second place finisher American Freedom in the post parade. Jockey Rafael Bejarano said, "I had to go for it. I was really comfortable the whole race. It was a good second for my horse. The winner, he was just the best. The winner, he went for it and he was still holding. I knew (Arrogate) could run all day; it was the best I could get from my horse. I would say my horse didn't really want to go more than 1 1/8. 1 1/4 might have been too much for him, but he tried really hard today."

Right: Third place finisher Gun Runner heads in the paddock. Trainer Steve Asmussen said, "We ran into a freak today, who ran the fastest Travers in (1:59.36). I honestly thought 2:02 would win the race. I think that's about right where we were with Gun Runner. I thought Florent (Geroux) gave him a great trip from the No. 14 draw. He wheeled out a little early at the 3/8 pole because he thought he had a lot of horse, but that horse on the lead [Arrogate], he didn't back up at all. That probably cost him second, chasing something late that you're not catching early. On a dry track, we saw how very high quality Gun Runner is, and it is very comforting to be able to throw out the Haskell now. With that being said, he was third today in a very fast running of the race." 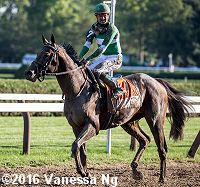 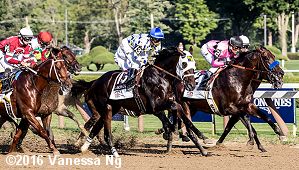 Left: Eleventh place finisher and beaten favorite Exaggerator returns after the race covered in dirt. Trainer Keith Desormeaux said, "Kent said he got bumped a little, but other than that we had the trip we wanted. Other than that, no excuses." Jockey Kent Desormeaux added, "I wouldn't have any idea."

Right: Shortly after the start of the Travers with Arrogate (inside), American Freedom, and Laoban out front. Eric Guillot, trainer of 12th-place finisher Laoban, said, "I think Baffert has 150 of the best-bred horses in the world, that's what I think. There will be five of them you can't outrun every year. He [Laoban] was too fresh. He fought."