The 48,213 fans who crammed into historic Saratoga Race Course for the 150th Travers Stakes were also treated to 6 additional graded stakes on the undercard, 3 of which are Breeders' Cup Challenge Series "Win and You're In" qualifiers for this year's Championshps at Santa Anita. Conditions were ideal for racing, with partly cloudy skies and temperatures in the low 70's, with the main track fast and turf courses firm. A new record Travers Day total handle of $52.129 million was set, with $11.657 million bet on track, just beating the previous record set last year.

Immediately before the Travers, a field of 9 older horses contested the $850,000 Sword Dancer Stakes (G1) over 1 1/2 miles on the inner turf course, looking for automatic entry into the Breeders' Cup Turf. Last year's Hollywood Derby (G1) winner Annals of Time was sent off as the 5-2 favorite. In to challenge him included 11-4 second choice Ya Primo, 2nd in the Bowling Green (G2), and two horses at 9-2, Bowling Green 3rd place finisher Sadler's Joy and 4th place finisher Channel Maker. 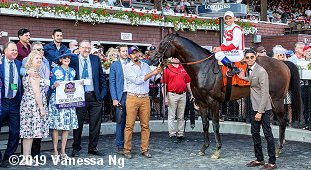 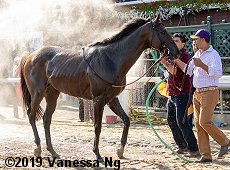 Left: Annals of Time in the winner's circle. Winning trainer Chad Brown said, "When he tipped out, I thought we had a good chance because he has a really good, strong closing kick. But it was a little tight near the finish. I'm glad he got up in time. We finally have had an uninterrupted training schedule and campaign with him. He's back to his old form when he won the Hollywood Derby when he was a 3-year-old. He's probably better now, so I'm just so grateful to have him back healthy."

Right: Annals of Time gets hosed off after the race. Winning jockey Javier Castellano said, "He's a good horse. I don't know if I've seen a horse that, no matter if the pace is slow or fast, he always finishes really well. I'm very proud of him. Some horses have to have pace in the race but this horse doesn't need one. You can see the pace was very slow, but he still responded and passed all the horses. I took my time. It's a mile-and-a-half and it's the first time he's gone a mile-and-a-half. You don't want to rush it to be close to the pace. I rode with a lot of patience and it paid off today." 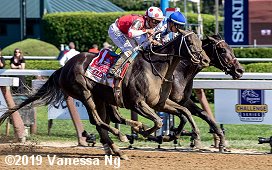 The $700,000 Personal Ensign Stakes (G1) presented by Lia Infiniti featured 6 older fillies and mares going 1 1/8 miles with the winner earning a spot in the Breeders' Cup Distaff. Delaware Handicap (G2) winner Elate was sent off as the 9-10 favorite over 8-5 Midnight Bisou, winner of 5 straight including the Ogden Phipps (G1), and 6-1 Wow Cat, 2nd in the Shuvee (G3) and the Breeders' Cup Distaff (G1). 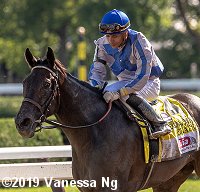 Left: Midnight Bisou in the winner's circle. Winning jockey Mike Smith said, "The mare ran a tremendous race. It was a fight to get by Elate, who is a champion in her own right. With the extra four pounds there it took me a bit to get going, but once I got her going I was really happy that she handled the 1 1/8. I thought I got there at the wire, but there have been times before when I thought I did and didn't. You don't know the 'bob' exactly, but I felt like I got it anyway. I'm happy to know that I did. I've ridden a lot of really great mares and she is catching up by leaps and bounds. She's just getting so good, and I'm very, very blessed to be a part of it. I was confident, but on this race track last year were two of her worst races of the year, so you just don't know. She's a different mare this year but you just don't know until you do it."

Right: Second place finisher and beaten favorite Elate returns afyter the race. Trainer Bill Mott said, "I liked our spot. She was getting a clear trip. The two speed horses that we figured would be in front of us were in front of us, but we weren't head and head with them. It gave us a good target. Midnight Bisou had to come over ground that we had already been over. I don't see any big excuse right now. It was a good race. One jump before the wire we were a head in front. Maybe we'll have to keep her in training another year and try again. But she ran great." 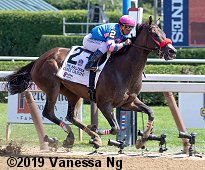 The $500,000 Ketel One Ballerina Stakes (G1) featured a field of 5 older fillies and mares going 7 furlongs on the main track, with the winner earning automatic entry in the Breeders' Cup Filly and Mare Sprint. Ogden Phipps (G1) runner-up Come Dancing was sent off as the 3-4 favorite over 5-2 Separationofpowers, winner of the Bed O'Roses (G3), and 9-2 Mia Mischief, 4th in the Honorable Miss (G2).

Jockey Jose Ortiz sent Separationofpowers to the lead exiting the chute through fractions of 23.31 and 45.86 while pressed by Mia Mischief and stalked by Come Dancing. Entering the lane Separationofpowers tired as Come Dancing came out 3 wide to sweep to lead through 3/4 in 1:09.45. Kept to task by Javier Castellano, Come Dancing drew off late to win by 3 1/2 lengths over 10-1 Dawn the Destroyer in 1:21.48. It was another 2 lengths back to 12-1 Special Relativity third. 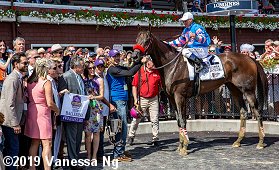 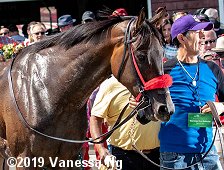 Left: Come Dancing in the winner's circle. Winning trainer Carlos Martin said, "When I saw her just sit out there in third, I said, 'She's so comfortable.' When she gets into that comfortable rhythm, it means she has a lot left coming back. She trained so brilliantly the whole time here. Sitting around the turn, I felt pretty comfortable. I was thinking we won a Grade 1 at Saratoga and we kept the Martin family and the Blue Devil [Racing Stable] family in a good frame of mind going into the Breeders' Cup. I think she's shown that, when given time between races, that she fires her best shot."

Right: Come Dancing heads back to the barn after the race. Winning jockey Javier Castellano said, "On paper, she looked like the horse to be in the lead, but in my heart I felt she didn't have to be on the lead today. She didn't break sharp out of the gate. I took my time to move up and control the race. She's a wonderful filly and she's so kind. You can do whatever you want with her. In the stretch, she proved she was much the best the way she did it." 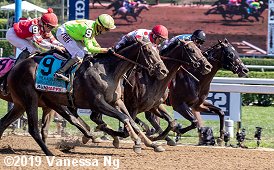 The $500,000 H. Allen Jerkens Stakes (G1) featuring a field of 9 three-year-olds sprinting 7 furlongs on the main track. Undefeated Amsterdam Stakes (G2) winner Shancelot was sent off as the 3-10 favorite over 10-1 Mind Control, 3rd in the Concern Stakes, and 21-2 Hog Creek Hustle, winner of the Woody Stephens (G1).

Jockey Emisael Jaramillo sent Shancelot to the lead exiting the chute through fractions of 23.15 and 45.58 while pressed by 20-1 Call Paul and stalked by Mind Control. Entering he lane Shancelot opened up a 2 1/2 length lead through 3/4 in 1:09.01, but Mind Control was moved out 4 wide by John Velazuez and outfinished deep-closing Hog Creek Hustle by a nose in 1:21.43. It was anotehr nose back to favorite Shancelot third, and a nack beck to 14-1 Rowayton to complete the 4 horse blanket finish. 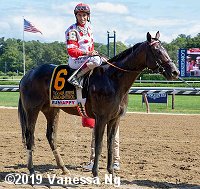 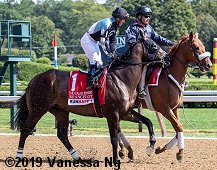 Left: Mind Control returns after the race. Winning trainer Greg Sacco said, "Wow. It was a great performance. His last two trips were so brutal. This was the race we were pointing for since the Woody, all summer. We wanted him in peak performance. He's gutsy horse. I can't say enough about him and about my staff and the way they prepared him. Johnny (Velazquez) is the best. He saved a little bit and then moved at the right time. He surged with such grit. I didn't know it was his nose there on the wire. I was saying a couple of prayers, and I was hoping. But he's a tough, tough horse. I'm glad he redeemed himself from the Woody Stephens because we knew that wasn't him."

Right: Third place finisher and beaten favorite Shancelot in the post parade. Trainer Jorge Navarro said, "He just got beat. That's horse racing. He's still a winner to me. I felt good in the stretch but it's just one of those things. As long as he comes back good, we'll be fine." 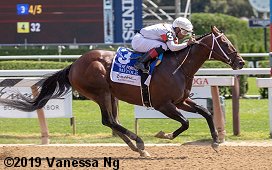 Kicking off the graded stakes septet on Saturday was the $600,000 Forego Stakes (G1) presented by Encore Boston Harbor featuring a field of 6 older horses sprinting 7 furlongs. Metropolitan (G1) winner and Vanderbilt (G1) third place finisher Mitole was sent off as the 9-10 favorite over 3-2 Promises Fulfilled, winner of the John A. Nerud (G2), and 7-1 Firenze Fire, 4th in the Vanderbilt.

Jockey Luis Saez sent Promises Fulfilled to lead through fractions of 23.05 and 45.58 while pressed by Mitole and stalked by 33-1 Killybegs Captain. Turning for home Promises Fulfilled tired as Mitole inherited the lead through 3/4 in 1:08.91. Kept to task by Ricardo Santana Jr., Mitole drew off late to win by 3 lengths over Firenze Fire in a new stakes record 1:20.80, just 0.40 seconds off the track record. It was another 3/4 lenths back to Killybegs Captain third. 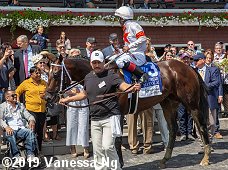 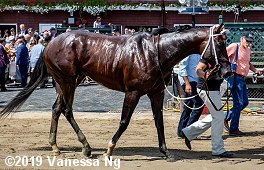 Left: Mitole in the winner's circle. Winning trainer Steve Asmussen said,  "I think the circumstances for the Vanderbilt just didn't suit him; coming off the huge run in the Met Mile and cutting back to three-quarters. But he came out of the race in good shape, trained beautifully for this, and the results speak for themselves. Ricardo knows the horse, lets him be himself, and the best version of Mitole usually takes care of itself. I think that this was very significant coming off the loss in the Vanderbilt. We'll speak with the Heiligbrodt and see how he comes out of the race and see how he trains. Obviously, we'll try to align ourselves for the Breeders' Cup."

Right: Mitole heads back to the barn. Winning jockey Ricardo Santana Jr. said, "Today he broke sharp and put himself in a position where he wanted to be. He's a really nice horse to ride, and he does everything right. We [went] slow in the first couple of quarters. My horse was comfortable in the position he was [in]. He put himself in a great spot." 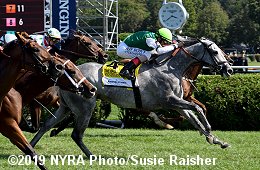 The $400,000 Woodford Reserve Ballston Spa Stakes (G2) featured a field of 9 older fillies and mares going 1 1/16 miles on the Mellon turf course. Allowance winner Mascha was sent off as the 11-4 favorite over 3-1 Secret Message, 4th in the Diana (G1) after winning the Nassau (G2), and 7-2 Fifty Five, winner of the Dr. James Penny Memorial (G3).

Jockey Tyler Gaffalione sent 40-1 Conquest Hardcandy to the front through fractions of 24.22, 48.47, and 1:12.68 while pressed by 11-1 Scottish Jig and stalked by 7-1 Significant Form. Conquest Hardcandy continued to lead through 1 mile in 1:36.61 but Significant Form came out for room and rallied to outfinish Indian Blessing by a neck in 1:41.39. It was another neck bak to 13-2 Starship Jubilee third, while favorite Mascha trailed throughout and failed to rally, finishing last beaten 5 1/2 lengths. 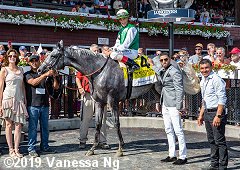 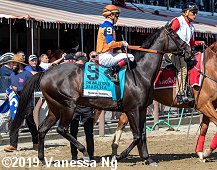 Left: Significant Form in the winner's circle. Winning trainer Chad Brown said, "She just needed some time off during the winter just to put some weight on. No physical problems, really. The 7/8 was a good trip for her off the pace. Five and a half is too short. I don't know if she got anything out of it, but it didn't screw her up. In the rear, between Fifty Five, it wasn't a bad spot, but Mascha was three-deep in the rear, couldn't tuck in and didn't have a good trip." Jockey John Velazquez added, "She's very good. It was special to be on her. They told me she was a nice horse, and they were right about it. The way she ran down the lane, she responded right away and showed great fight."

Right: Last place finisher and beaten favorite Mascha heads out for the post parade. The Chad Brown trainee has a recod to 2 wins, 2 seconds, and 0 thirds in 6 starts, earning $99,414 for owner Martin Schwartz.

On to the Travers Stakes