Closing out the graded stakes action on Memorial Day weekend at Santa Anita was the $200,000 Charles Whittingham Stakes (G2) on Sunday. A field of 10 older horses went to post in this 1 1/4 mile turf contest, with 14,484 fans in attendance under sunny skies and temperatures in the mid 80's. Itsinthepost was sent off as the 9-5 favorite off wins in the San Luis Rey (G2) at Santa Anita and Elkhorn (G2) at Keeneland. In to challenge him included 5-2 second choice Ashleyluvssugar, 5th in last year's Breeders' Cup Turf (G1) and third in teh San Luis Rey last out, and 7-1 third choice Syntax, second in the San Juan Capistrano (G3).

Jockey Martin Pedroza sent 35-1 Patentar to the lead down the hill and first time around the infield through fractions of 23.86, 47.78, 1:11.16, and 1:34.45 while as many as 3 lengths clear of 9-1 Frank Conversation and favorite Itsinthepost stalking him second and third. In the stretch Patentar continued to lead to the 1/8 pole but tired badly after. Ashleyluvsugar, 4th early under Gary Stevens, came through between horses to win by 1/2 a length over Frank Conversation in 1:58.49 over the firm going. It was a head back to Syntax third, while favorite Itsinthepost faded late to finish 5th. 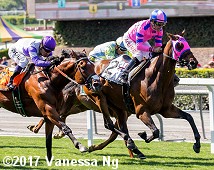 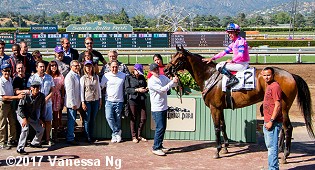 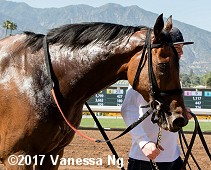 Left: Ashleyluvssugar in the winner's circle. Winning owner-breeder Joe Ciaglia said, "Gary's really riding well now and he's got a lot of confidence in this horse. At this distance, this horse has a pretty good turn of foot when we're able to take him off the pace. He had to wait, but it looked like he kinda re-rallied. Gary thought it looked like there was a lot of speed in the race and he was right. This is such a neat horse."

Right: Ashleyluvssugar heads back to the barns. Winning jockey Gary Stevens said, "I talked to Pete this morning and we were on the same page; we didn't want to be sitting ducks like last time. My horse can't sustain a long run but he can run a long ways. I pulled on him and he settled for me. They were lined up going down the backside and they were going a fair enough pace for a mile and a quarter. I was hoping for room and I got the split I needed at the head of the stretch. He just exploded." 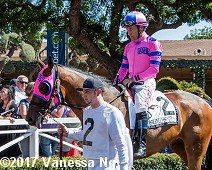 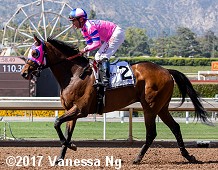 Left: Ashleyluvssugar in the paddock. Winning trainer Peter Eurton said, "At this point in his career, at his age, I think he's much better when we can get him covered up and make a run. Being on the lead, going this far, at his age, he gets tired, it's difficult to take all that pressure. As you could see, he was a little keen that first quarter, but going 1 1/4, he's better off running this way. I didn't know if Gary was going to be able to get through, but Gary said he was loaded and he sure was."

Right: Ashleyluvssugar returns after the race. Eurton added, "I don't know about getting better, but he sure seems to be staying at the same level. What a ride here today, it's just amazing. He's like a little deer, he just keeps on going. He just has amazing lungs to do it, each and every time. To be on the lead for 1 1/4 miles last time out and not get overtaken was just too much for him and it really took it out if him." 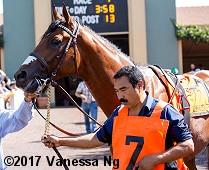 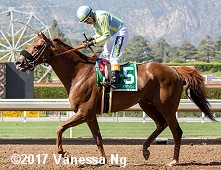 Left: Second place finisher Frank Conversation in the paddock before the race. The 9-1 shot pressed the pace in second under Mario Gutierrez but could not hold off the winner. The Doug O'Neill trainee improved his record to 4 wins, 2 seconds, and 2 thirds in 14 starts, earning $442,740 for owner Reddam Racing LLC.

Right: Third place finisher Syntax returns after the race. The 7-1 shot raced 7th 5 lengths off the pace under Rafael Bejarano then rallied to get third beaten just 1/2 a length. The Phil D'Amato trainee improved his record to 3 wins, 5 seconds, and 5 thirds in 20 starts, earning $353,866 for owner Matt Schera. 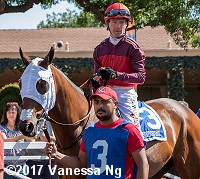 Fifth place finisher and beaten favorite Itsinthepost in the paddock. The 9-5 choice tracked the pace about 2 lengths back under Tyler Baze, gained third in the stretch but was passed late to finish 5th beaten 1 1/4 lengths. The Jeff Mullins trainee has a record of 5 wins, 6 seconds, and 5 thirds in 26 starts, earning $516,712 for owner Red Baron's Barn LLC. 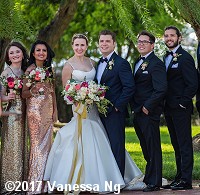 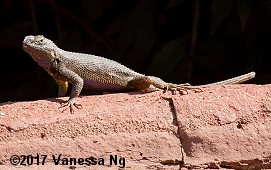 Left: There was a wedding at the track on Saturday.

Right: A lizard sunning on a rock ledge in the paddock. 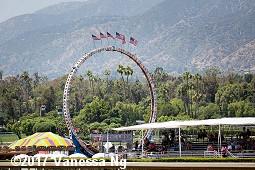 The infield was transformed to the Santa Anita Carnival for Memorial Day weekend with rides, carnival eats, and more for the family. 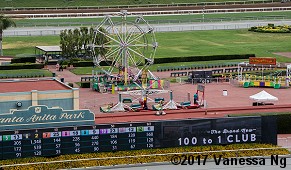 More of the carnical rides in the infield.