The major New York prep race for the Triple Crown is the $1 million Wood Memorial Stakes (G1), contested at 1 1/8 miles, one complete circuit of the Aqueduct main track, worth 100 points to the winner under the Road to the Kentucky Derby. A field of 7 three-year-olds went to post on Saturday afternoon under clear skies and temperatures in the mid 50's. Champagne (G1) winner Daredevil was sent off as the lukewarm 2-1 favorite off a second place finish in the Swale (G2). In to challenge him included two horses each sent off at 11-5, Frosted, fourth in the Fountain of Youth (G2) last out, and El Kabeir, winner of the Gotham (G3).

Jockey Angel Arroyo sent 42-1 longest shot Toasting Master to the lead and he set slow early fractions of 24.50, 49.04, and 1:13.41 while pressed by Daredevil and 22-1 Tencendur. Entering the stretch, Toasting Master tired allowing Tencendur to inherit the lead through 1 mile in 1:37.76. However, Frosted, 6th early, came out 4 wide for room to take over the lead at the 1/16 pole, drawing off to win by 2 lengths in 1:50.31 over the fast main track. It was another 3 3/4 lengths back to late-running El Kabeir third, while favorite Daredevil was another 6 1/4 lengths back in fourth. 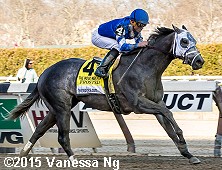 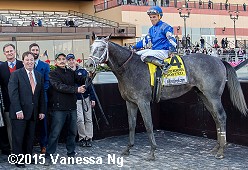 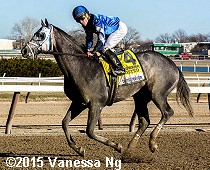 Left: Frosted in the winner's circle. Winning trainer Kiaran McLaughlin (front row, far left) said, "This has been a top, special project for my team, my brother, the grooms, etc. We know he has a ton of ability and the last race really made us scratch our heads, asking 'why?' He would go to the lead and throw his head up and stop. We did everything we could to change everything we possibly could that we thought went wrong, including the jockey just because we were changing everything. It all worked out and it's just a special win for our team and Godolphin because he's a homebred (by Tapit) and it enhances his resume by winning a race like the Wood."

Right: Frosted returns after the race. 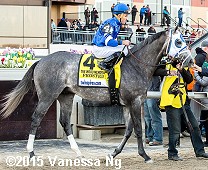 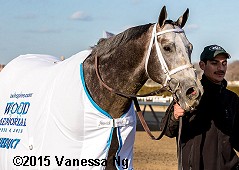 Right: Frosted returns to the barn after the race in his new winner's blanket. Winning jockey Joel Rosario said, "He broke fine. He didn't break that sharp and I didn't really want to send him out of there and be on the lead. He was always there for me. I tried to get him to the outside, where he'd be comfortable. The whole way, he was taking me. That was a very good race. I wasn't concerned with (Tencendur) because I know when you ask him, he's always there for you. (Derby mount?) I hope so." 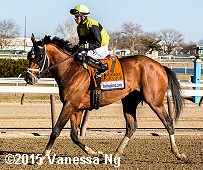 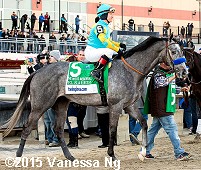 Left: Second place finisher Tencendur returns after the race. Jockey Jose Ortiz said, "He went so good, we were right where we wanted to be at 49 seconds. At the 3/8 pole, I asked him to go just a little bit because I know we went easy and he responded really well and I thought we were home until Frosted came along. He's a horse that's going to keep improving and develop further." Trainer George Weaver added, "I'm from Louisville and I'd love to run in the Derby. As long as the horse is in good shape, I'd be inclined to go."

Right: Third place finisher El Kabeir heads out for the post parade. Trainer John Terranova said, "He was running at the end. I watched him gallop out and he passed everybody. He was finishing really well but there wasn't any pace to soften up the front runners. We'll see how he is and figure it out from there. If he comes back out of this well, I think we'll get a lot stronger pace in a race like the Derby, and he can sit back and close. He's done that twice. I thought he made up a lot of ground there in the stretch." 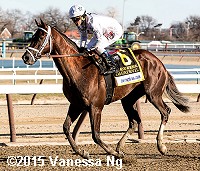 Fourth place finisher and beaten favorite Daredevil returns after the race. Jockey Javier Castellano said, "It wasn't perfect for us, the fractions were really slow but we had a good pace and a good rhythm. I was really kind of surprised at how he finished the race. I really don't know why. He seemed fine. He pulled up good. But I couldn't go with the rhythm at the 3/8 pole and when I tried to move and go with the other horse, I couldn't keep up with them. I didn't finish today. I just didn't have it." 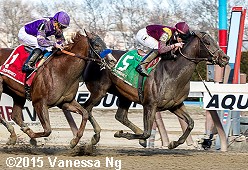 The $300,000 Bay Shore Stakes (G3) featured a field of eight 3-year-olds sprinting 7 furlongs on the main track. Ready for Rye was sent off as the 6-5 favorite off his win in the Swale (G2) at Gulfstream. In to challenge him included 2-1 second choice Lord Nelson, fourth in the San Felipe (G2) after winning the San Vicente (G2), and 7-2 third choice Majestic Affair, second in the Jimmy Winkfield.

82-1 Papa Upa and 26-1 Easy to Say dueled down the backstretch through fractions of 23.05 and 46.79 while stalked by Ready for Rye. Entering the lane, the favorite gained a short lead through 3/4 in 1:12.19, but 9-1 March, last early, came through 4 wide and outfinished Lord Nelson by 1/2 a length to win in 1:24.72. It was a long 4 1/4 lengths back to Ready for Rye third. There were 2 claims of foul against Irad Ortiz Jr. alleging interference at the 1/8 pole, and a stewards' inquiry into the stretch run, but the result was allowed to stand. 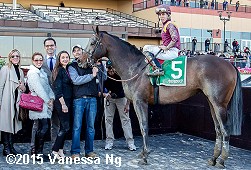 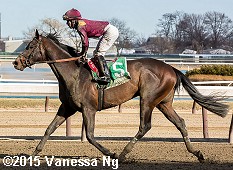 Left: March in the winner's circle. Cherie DeVaux, assistant to winning trainer Chad Brown said, "It was a little nerve-wracking but I feel the stewards made the right decision. I think he ran really well. After being in the Withers, Chad [Brown] said maybe try him as a come-from-behind sprinter. It was definitely the right call. He sat nicely in the back and came with a really good kick. We'll see how he comes out of it and go from there."

Right: March returns after the race. Winning jockey Irad Ortiz Jr. said, "I had a good trip. My horse was coming from longer races; we just wanted to break good and come from behind, and he did it. The trainer did a great job with him. My horse came out a little bit at the end, but I think the stewards made the right decision." 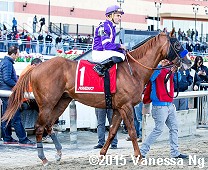 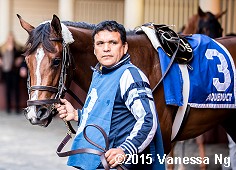 Left: Second place finisher Lord Nelson in the post parade. Jockey Jorl Rosario said, "He was jumping a little early. I tried to put him in the race a little bit, get him up closer to the pace, but he didn't want to be there. He backed up, backed up, and then I had to take him way in the middle of the track so he wouldn't get hit with dirt. He just kept on running; it was a very impressive race."

Right: Third place finisher and beaten favorite Ready for Rye returns after the race. The 6-5 choice pressed the pace under jockey Luis Saez but weakened late to finish third beaten 4 3/4 lengths. The Tom Albertrani trainee improved his record to 2 wins, 2 seconds, and 1 third in 5 starts, earning $233,360 for owner Chalk Racing.

On to the Carter Handicap and Gazelle Stakes also on the card.


Back to Horse-Races.Net main page