The final Saturday of the 2015 Saratoga meeting featured four graded stakes, contested before 26,762 fans in attendance under sunny skies and temperatures in the low 80's

The highlight race on closing weekend is the $600,000 Woodward Stakes (G1). It is the major local prep for the Jockey Club Gold Cup (G1) and ultimately the Breeders' Cup Classic (G1), for older horses going 1 1/8 miles over the main track. A field of 8 faced the starter with Liam's Map sent off as the 6-5 choice off his close second in the Whitney (G1). In to challenge him included 7-2 second choice Effinex, winner of the Excelsior (G3) and Suburban (G2), and 5-1 third choice Wicked Strong, fourth in the Whitney (G2) and winless since the 2014 Jim Dandy (G2). 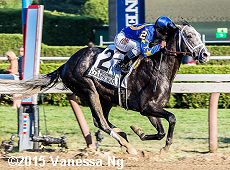 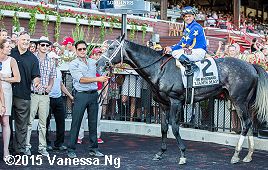 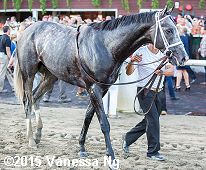 Left: Liam's Map in the winner's circle. Winning trainer Todd Pletcher said, "The Whitney was as tough a loss as you'll experience. He ran an unbelievable race that day and everything he indicated to us from that time until today was that he was ready to come back over and put forth another big effort. I'm just happy to see him get that Grade 1 that he deserves so much."

Right: Liam's Map heads back to the barn after the race. Winning jockey Javier Castellano said, "On the backside, when I saw the horse was relaxed, I knew we were going comfortably. In the beginning, I had to use him a little bit to dictate the pace. I had the inside post (so) I had to go to the lead with the horse. When I got to the lead and dictated the pace, by the half-mile he began to relax and I was thinking I could win the race. Liam's Map put in a great effort today." 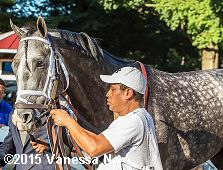 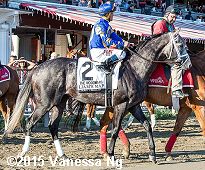 Left: Liam's Map in the paddock before the race. Pletcher added, "The opening fractions were very much in his favor, and he has that style where he can get into a cruising speed and just keep carrying it. The thing that he did after he went that 47 and 1 is he came back with another 23 and change to go 1:10 and change and then 1:34 and change. He just gets into that rhythm and he just runs horses off their feet. I'll tell you, Coach Inge ran unbelievable. It was a super, super effort. Good enough to win a lot of Woodwards"

Right: Liam's Map heads out to the track before the race. Castellano added, "I'm very lucky and very fortunate to be in that spot (winning 5 Grade 1's this meet). I expected to have a great meet, but I think I was in the right place at the right time and everything fell into place. I had a lot of support; from owners and trainers and my agent." 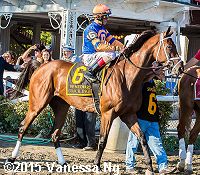 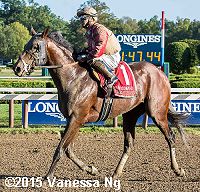 Left: Second place finisher Coach Inge heads out to the track before the race. Jockey John Velazquez said, "We got a perfect trip; broke well, stalked the No. 2 horse (Liam's Map) and made a move in the stretch but we were just second best."

The $350,000 Spinaway Stakes (G1) is the premier race at Saratoga for 2-year-old fillies, contested at 7 furlongs on the main track. Rachel's Valentina, the second foal of Rachel Alexandra, was sent off as the 7-4 favorite in the field of 6 off her 2 length debut win here on August 2. In to challenge her included 2-1 second choice Tap To It, a debut winner on August 16, and 9-2 third choice Tonasah, a debut winner but 2nd in the Adirondack (G2) last out. 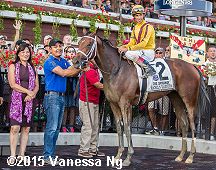 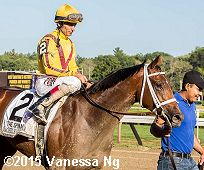 Left: Rachel's Valentina in the winner's circle. Winning trainer Todd Pletcher said, "I thought she ran fantastic. Actually, she put herself into the race a little more than I thought she would, but she seemed to be handling tracking those horses well, and getting a little dirt well. I felt like turning for home, knowing her style and watching her train, that she was going to keep coming. I've always felt like the farther she goes, the better she gets. And I think that's proven to be true. The options will be pretty straightforward; it would either be the Frizette or the Alcibiades. I think she'll have one more race if she's doing good."

Right: Rachel's Valentina returns after the race. Jockey John Velazquez said, "She was a little more aggressive than I anticipated coming out of the eight, and I didn't want to be hooked up with the other horses on the lead, so I had to take a good hold of her and put her behind the horses in front. She relaxed and I left her there for a while, and at the 1/4 pole I pulled her out. Today, she knew what she was supposed to do. I didn't have to do anything down the lane, just keep her mind on running, and she got it done. She's one of those horses that the farther she goes, the better she gets. Before she ran I thought 3/4 might be a little too short and she still got up there. 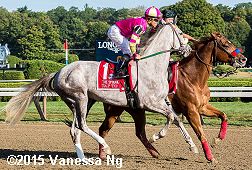 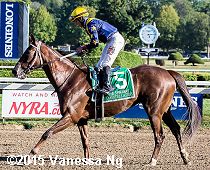 Left: Second place finisher Tap to It in the post parade. Jockey Joel Rosario said, "It was a good trip, she broke well and I tried to follow the No. 2 horse (Rachel's Valentina). I thought she was the one to beat. I followed her but she was probably the best horse today."

Kicking off the stakes action on Saturday, a field of 8 three-year-olds contested the $300,000 Saranac Stakes (G3) at 1 1/8 miles on the Mellon turf course. Hall of Fame Stakes (G2) winner Takeover Target was sent off as the 9-5 favorite over 5-2 Go Around, an allowance winner last out, and 9-2 Nonna's Boy, winner of the Lamplighter Stakes at Monmouth. 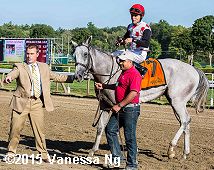 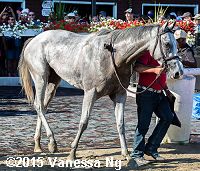 Left: World Approval in the winner's circle. Norm Casse, assistant to winning trainer Mark Casse said, "This horse is a very tricky horse to figure out and ride. You can't give up on him and when you ask him, he'll go. Joel never gave up on him and it looked like he was confident with him the whole time. He made all the difference today. The race that he won when he was sitting close to the pace, there was no pace. Today, it looked like there was going to be a little more pace. He let him relax, and then he asked him. When you ask him, he's going to go, so you've got to plan it just right. At the 1/16 pole, I didn't think we'd win because that's how tough the meet's been on us. Now we get to go, this was our last runner of the meet, and we get to come back next year with some optimism."

Right: World Approval returns to the barn after the race. Winning jockey Joel Rosario said, "They got out of there not that quick and picked it up on the backside. I just wanted to be on the inside the whole way and try to save some ground. I could see when (John Velazquez) pointed (Money Multiplier) to the outside , I said, 'OK, that's my chance to go.' My horse was just skipping trying to keep on going. When he got there, he moved really beautiful on the inside." 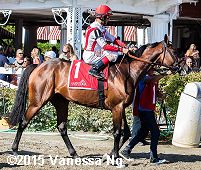 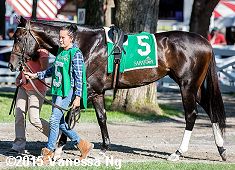 Left: Second place finisher Money Multiplier heads out for the post parade. The 13-1 shot raced 4th 3 lengths off the pace under John Velazquez, gained the lead midstretch but just missed. The Chad Brown trainee improved his record to 1 win, 2 seconds, and 1 third in 6 starts, earning $164,800 for owners Klaravich Stables and William Lawrence.

Right: Third place finisher Go Around in the paddock before the race. The 5-2 second choice was last under Jose Lezcano then rallied 6 wide to get third beaten 1 1/4 lengths. The Bill Mott trainee improved his record to 2 wins and 3 thirds in 5 starts, earning $136,900 for owner-breeder Peter Vegso. 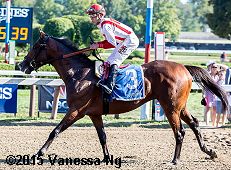 Sixth place finisher and beaten favorite Takeover Target returns after the race. The 8-5 choice was 4 lengths back in 6th under Irad Ortiz Jr. but failed to rally finishing 6th beaten 7 lengths. The Chad Brown trainee has a record of 3 win, 1 seconds, and 0 third in 6 starts, earning $303,200 for owners Klaravich Stables and William Lawrence.

The last stakes race on Saturday was the $200,000 Glens Falls Stakes (G3) for older fillies and mares going 1 3/8 miles on the inner turf course. River Memories and Waya (G2) Stakes winner Goldy Espony was the 8-5 favorite in the field of 9 over 9-2 Regardez, an allowance winner last out and 11-2 Eastern Belle, second in the New York (G2) and the Waya. 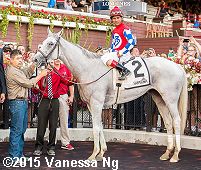 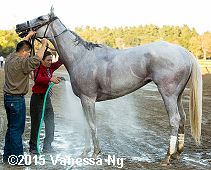 Left: White Rose in the winner's circle. Winning trainer Bill Mott said, "Gorgeous, beautiful. I was worried there was nobody to go with Goldy Espony and they let the (Maximova) run on out of there and it helped us out. She had a ground-saving trip the whole way, it was beautiful. I thought, even down the backside, maybe he'll (Shaun Bridgmohan) tip her out and go outside of Goldy Espony, but he went inside. He cut the corner the whole way, so really it was a great trip."

Right: White Rose in the paddock before the race. Winning jockey Shaun Bridgmohan said, "I had a perfect trip. It was pretty straightforward, got to the fence saved every inch of ground and angled off at the top of the stretch and she gave me what she had today. Obviously, Bill does a phenomenal job with her and she showed it." 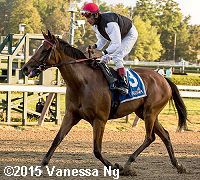 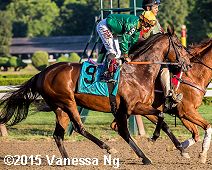 Left: Second place finisher Eastern Belle returns after the race. The 11-2 third choice was 5th 9 lengths off the pace under John Velazquez, rallied 4 wide but just missed. The Graham Motion trainee improved her record to 1 win, 7 seconds, and 2 thirds in 11 starts, earning $229,831 for owner Anoinette Oppenheimer.

Right: Third place finisher Regardez in the post parade. The 9-2 second choice raced 6th 12 lengths off the pace under Irad Ortiz Jr. then rallied to get third beaten 2 lengths. The Chad Brown trainee improved her record to 3 wins, 3 seconds, and 3 thirds in 14 starts, earning $177,842 for owner J.H. Richmond-Watson. 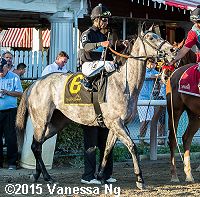 Last place finisher and beaten favorite Goldy Espony heads out to the track before ther race. The 8-5 choice tracked the leaders in third early under Kendrick Carmouche, but tired in the stretch to finish last beaten 15 lengths. The Chad Brown trainee has a record of 6 wins, 1 second, and 2 thirds in 13 starts, earning $403,628 for owners Swift Thoroughbreds and Bradley Thoroughbreds.