The final Saturday of the 2019 Saratoga meeting featured four graded stakes contested before 32,302 fans. It was partly cloudy most of the afternoon with temperatures in the low 70's and the main track fast and the turf going firm.

The highlight race on closing weekend is the $750,000 Woodward Stakes (G1) Presented by NYRA Bets. It is the major local prep for the Jockey Club Gold Cup (G1) and ultimately the Breeders' Cup Classic (G1), for older horses going 1 1/8 miles over the main track. A field of 8 went to post with last year's winner Yoshida sent off as the lukewarm 2-1 favorite off a 2nd place finish in the Whitney (G1). In to challenge him included 9-2 second choice Tom's d'Etat, 3rd in the Stephen Foster (G2) before winning the Alydar, and 3-1 third choice Preservationist, 4th in the Whitney after winning the Suburban (G2).

Jockey Jose Lezcano sent 13-1 Mr. Buff to the lead first time by through fractions of 23.98, 47.97, and 1:11.49 while pressed by 17-1 Bal Harbour and stalked by Preservationist. Turinng for home Mr. Buff tired allowing Bal Harbour to inherit the lead through 1 mile in 1:35.67. Preservationist and jockey Junior Alvarado came through between horses at the 1/8 pole to outfinish Bal Harbour to win by 1/2 a length in 1:48.11. It was another 1/2 length back to late-running favorite Yoshida third. 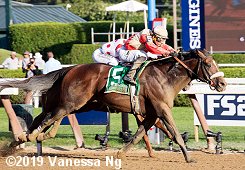 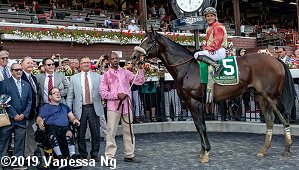 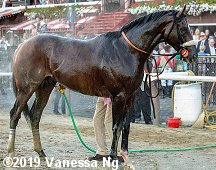 Left: Preservationist in the winner's circle. Winning trainer Jimmy Jerkens said, "Perfect for the kind of horse that he is - even paced. He's got a good cruising speed, but it looked like he was just galloping. When he gets into a nice rhythm like that, he's going to run his race. Junior [Alvarado] was able to switch him to his outside lead and I thought he really took over after that. I didn't think he was going to get there at first, but when one of the horses started to fade and it began to open up a little bit, I was pretty confident after that."

Right: Preservationist is hosed off after unsaddling. Winning jockey Junior Alvarado said, "I had a great trip. I tried to find my way through and have something turning for home, but it was hard. Javier [Castellano, Bal Harbour] had some horse turning for home and I wanted to follow him but I know he didn't want to move because then I would be in the clear. So, he tried to hold me there as long as he could. Turning for home, I had some run in between horses. They made it a little bit tight for me there, but at that point, I thought I had it." 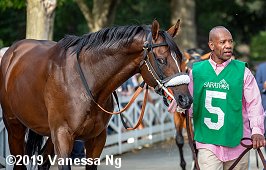 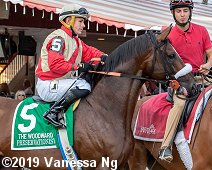 Left: Preservationist in the paddock. Jerkens added, "I'm sure we'll take a look at the Jockey Club Gold Cup, but he's run pretty close together his last three starts. Obviously, the year-end goal you have to look at the Breeders' Cup Classic as to where we want to be. We'll come up with a plan to get there ready."

Right: Preservationist heads out to the post parade. Alvarado added, "Jimmy doesn't really tell me how to ride, he leaves it up to me. That's why we've been a good team so far. I told him last time that I took my chances. I thought that if I sat second that day that I was going to run for second, so I put the horse on the lead and got brave and changed the whole thing trying to win the race and it didn't work out. I'm glad that Jimmy stuck with me. We regrouped and we went back to do what he really likes to do, which is stalking and having a target, and it worked out great again. He showed some guts today. I got through and he came out on top at the end for me." 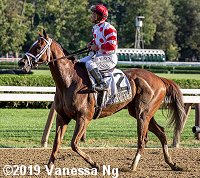 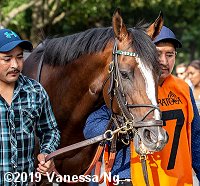 Left: Second place finisher Bal Harbour returns after the race. Jockey Javier Castellano said, "You never know in these types of races. They're all good horses. I think my horse belonged in this race and I'm so happy with how he did things today. We broke well out of the gate and got a good spot in the race. I'm happy with how he did it every single step of the way. He put up a good fight."

Right: Third place finisher and beaten favorite Yoshida in the paddock. Jockey Joel Rosario said, "We were a little bit further out than I wanted to be. He ran his race. He came over and I thought we were going to get there. The pace just wasn't as fast up front."

Kicking off the Saturday stakes quartet was the $250,000 Prioress Stakes (G2) featuring a field of just 5 three-year-old fillies sprinting 6 furlongs on the main track. Eight Belles (G2) winner Break Even, undefeated in 6 starts, was sent off as the 7-10 favorite over 2-1 Risky Mandate, undefeated in 2 starts and making her stakes debut here, and 9-2 Royal Charlotte, winner of the Victory Ride (G3) but 6th in the Test (G1).

Jockey Shaun Bridgmohan sent Break Even to the front down the back through fractions of 21.87 and 44.76 while pressed by 21-1 Break Curfew and stalked by Royal Charlotte. Turning for home Break Even continued to lead through 5f in 56.76 but Royal Charlotte and jockey Javier Castellano came out for room at the 1/8 pole and rallied by to win by 1 1/2 lengths in 1:09.45. It was another 2 1/2 lengths back to Risky Mandate third. 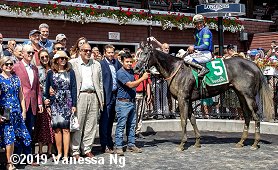 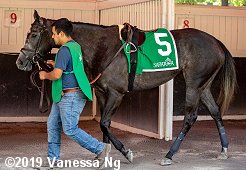 Left: Royal Charlotte in the winner's circle. Winning trainer Chad Brown said, "For whatever reason, the track has been playing differently in the morning and I didn't have anywhere else to run her. I was just going to point her to Keeneland and freshen her. She had a couple of easy breezes and went fine, but I saw a completely different track, so we took a shot. She looks like she's a much different horse going 6 or 6 1/2, and Javier really rode a patient race and the pace helped us. I was thinking about the Raven Run [Keeneland] even though I said she's better going six or six and a half but I had that race in mind because her race at Keeneland was also really good. It's probably the logical move."

Right: Royal Charlotte in the paddock. Winning jockey Javier Castellano said, "I like the way she did it today. The pace was hot and I had Break Even as a target every single step of the way. I tipped her outside and she finished strong. The way the race developed was great. It was a small field and they all grouped up together and we sat behind them and it paid off today. They went pretty quick and that's what I expected. I just wanted to ride patient and keep track of my target Break Even - that was the horse to beat. I just followed every single step of the way and ran them down from the top of the stretch." 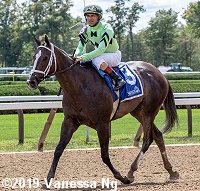 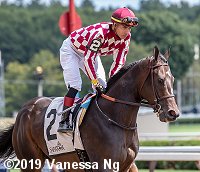 Left: Second place finisher and beaten favorite Break Even returns after the race. Jockey Shaun Bridgmohan said, "I went to the front and we got caught late. She tried like always."

Jockey Luis Saez sent 14-1 Power Player to lead first time by through fractions of 24.49, 49.66, and 1:13.37 while pressed by 11-2 Rinaldi and stalked by Good Governance. Turning for home Power Player tired allowing Good Governance to gain the front through 1 mile in 1:36.05, but Global Access, last early under John Velazquez, came out 4 wide for room and rallied to win by a neck in 1:41.80. It was a length back to Seismic Wave. 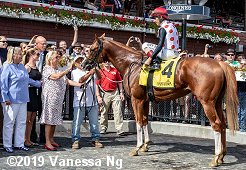 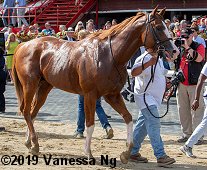 Left: Global Access in the winner's circle. Winning trainer Mike Trombetta said, "John managed him great today. I was a little concerned when he settled back off what looked like a slow pace. He obviously was very comfortable doing what he did. It's a little later in the meet and maybe [the turf] isn't quite as fast as it's been. I think the horse probably preferred that a little more, plus the extra 1/16 mile. He did real well at Woodbine and did good in Tampa and he's come here and has done well. He shows up every time and does well. I don't think this horse has any distance limitations. He always finishes up with good energy and gallops out strong."

Right: Global Access heads back to the barn. Winning jockey John Velazquez said, "Last time, we got in trouble behind horses. So, today I put my hands down and he was comfortable on the outside and relaxed much better that way. When I put him behind horses last time he was very rank, so today was totally different. He relaxed really good and kicked hard down the lane. I was really comfortable with the way he was going." 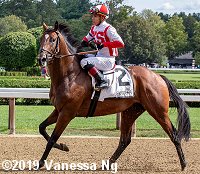 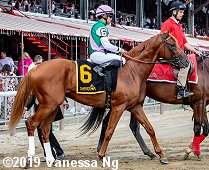 Immediately before the Woodward, a field of 7 older fillies and mares contested the $250,000 Glens Falls Stakes (G2) over 1 3/8 miles on the inner turf course. Waya Stakes (G3) third place finisher Santa Monica was sent off as the 8-5 favorite over 2-1 Fools Gold, winner of the Waya, and 6-1 Mrs. Sippy, 7th in the Pinnacle (G3) at Haydock Park.

Jockey Kendrick Carmouche sent 8-1 Lady Montdore to the front through slow fractions of 25.13, 49.80, 1:15.13, and 1:38.66 while pressed by Fools Gold and stalked by 17-2 Empressof the Nile. Turning for home, Lady Montdore tired as Mrs. Sippy, 6th early under Joel Rosario, came out 3 wide for room and outfinished Empressof the Nile to win by 3/4 length in 2:13.62. It was another 2 1/2 lengths back to late-running favorite Santa Monica third. 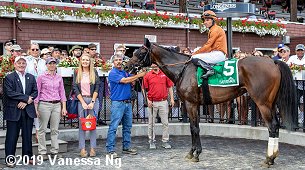 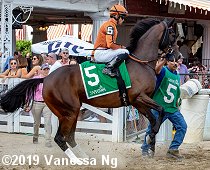 Left: Mrs. Sippy in the winner's circle. Winning trainer Graham Motion said, "Every time I looked away, Joel had crept up a couple of spots. It was an impressive performance and an impressive ride by Joel. She did everything right. I'll have to look for bigger fish because I thought her win today was very nice."

Right: Mrs. Sippy heads out for the post parade. Winning jockey Joel Rosario said, "She broke a little bit slow and then after that it was all her. It looked like she just wanted to follow somebody the whole time. I just thought that's the way she's probably used to running in Europe. She did well for her first time here. Graham just told me to be comfortable where you are and take it from there. I knew I had to wait a little bit going into the turn, but she was able to pick up again and get going kicking on to the wire." 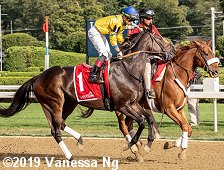 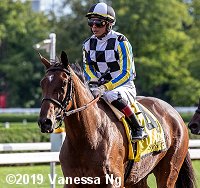 Left: Second place finisher Empressof The Nile in the post parade. Jockey Irad Ortiz Jr. said, "I got a perfect trip. I can't complain. We just ran out of real estate at the end."