The Saturday after Independence Day is one of the highlights of the Belmont Park spring-summer meeting, with 6 rich graded stakes run that afternoon. Conditions were excellent on Long Island, with cloudy skies and temperatures in the mid 80's, with a fast main track and both turf courses firm. The highlight race of the afternoon was the $1.2 million Belmont Derby Invitational (G1) for 3-year-olds going 1 1/4 miles on the inner turf course. James W. Murphy winner Yoshida was sent off as the lukewarm 3-1 favorite in the field of 11. In to challenge him included 9-2 second choice Arklow, winner of the American Turf (G2), and 11-2 third choice Oscar Performance, last year's Breeders' Cup Juvenile Turf (G1) winner and off his win in the Pennine Ridge (G3). 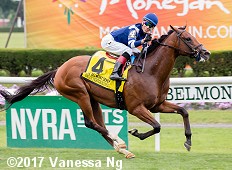 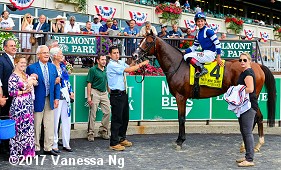 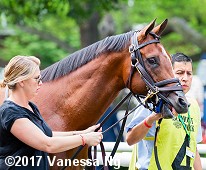 Left: Oscar Performance in the winner's circle. Winning trainer Brian Lynch said, "When he broke I tad slow and Jose urged him a little bit to run up there and I saw the 23 and change, I thought, I hope it doesn't turn into one of these sort of deals. When the 49 and change came up, I started to grin a little bit and when I saw the 1:14 and change come up, I broke into a big smile. When he inched away from them in the lane, I could see they were all throwing leather behind him. I thought he's going to be tough to catch from here. He proved he can get the mile and a quarter and I think he beat a quality field of horses today."

Right: Oscar Performance in the paddock before the race. Winning jockey Jose Ortiz said, "He broke slow and I had to chase him the first 1/4 mile, but then in the backside he relaxed real well. I backed the pace down a little and he was full of run when I asked him to go. I was a little concerned (about the turf condition) because he didn't run well in Kentucky on the soft ground, but if you look back, he won the Pilgrim on soft ground here, so I think it was the Kentucky course. 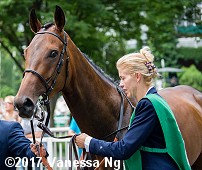 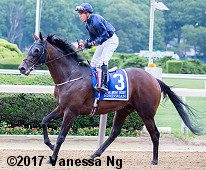 Left: Second place finisher Called To The Bar in the paddock before the race. Carl Brandt, assistant and husband of trainer Pia Brandt said, "We think he ran a great race, he was just beaten by a better horse. The winner won pretty easy. He ran well. I don't know yet, but I hope we can come back (to New York) that would be great. We have been so well treated and it has been really, really nice to be here." 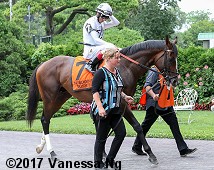 Fifth place finisher and beaten favorite Yoshida heads out of the paddock before the race. Jockey John Velazquez said, "I got a perfect trip. He just didn't fire, I don't know why."

The $1 million Belmont Oaks Invitational (G1) featured 11 three-year-old fillies also going 1 1/4 miles in the inner turf. Prix Penelope (G3) winner Sistercharlie was sent off as the 7-4 favorite off her 2nd place finish in the Prix de Diane (French Oaks-G1). In to challenge her included 5-2 second choice New Money Honey, winner of the Wonder Again (G3), and 7-1 Beau Recall, second in the Honeymoon (G2) and Senorita (G3). 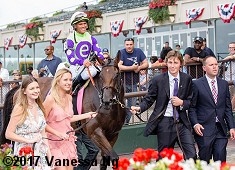 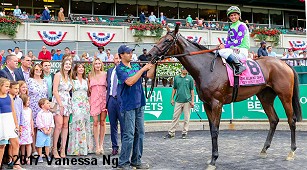 Left: New Money Honey takes her walk down Victory Lane with trainer Chad Brown on the far right. Brown said, "Obviously, (New Money Honey) ran terrific, got position early, and they were moving along pretty good. Javier just backed off a little bit and had first run, and she kept great."

Right: New Money Honey in the winner's circle. Winning jockey Javier Castellano said, "I'm very lucky to ride for Mr. Brown and the opportunity he gives me to ride the filly. We've been really lucky except for the last couple of races with the filly. I think she is very straightforward and today she broke well out of the gate and got a good spot in the race. Chad and I talked about our strategy before the race and I tried to follow procedure. It worked out great. It was a beautiful spot in the beginning of the race. When it was time to go, she responded and finished really well today." 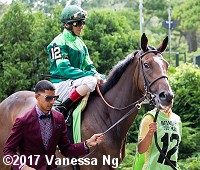 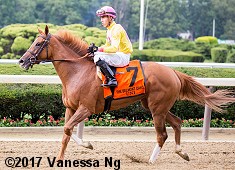 Left: Second place finisher and beaten favorite Sistercharlie heads out of the paddock before the race. Jockey John Velazquez said, "It was a perfect trip. We didn't get there. She's run a little bit longer so she didn't show much speed the first part of the race. So, I dropped inside and tried to save all the ground that I could. Down the backstretch, I tried to make a little move and get a little bit closer to the horses in front. I saw Javier was third or fourth on the horse to beat so I tried not to make a premature move. When I pulled out at the 1/4 pole she ran, but she couldn't catch up."

Right: Third place finisher Uni returns after the race. Jockey Irad Ortiz Jr. said, "I got a good trip. She's a nice filly. She moved well and has a bright future going forward."

The $350,000 Belmont Sprint Championship (G2) featured a field of 7 older horses sprinting 7 furlongs on the main track, with the winner earning automatic entry to the Breeders' Cup Sprint (G1) under the Breeders' Cup Challenge "Win and You're In" promotion. Dubai Golden Shaheen (G1) winner Mind Your Biscuits was the 7-5 favorite over 2-1 Unified, second in the Carter (G1) after winning the Gulfstream Sprint (G3), and 6-1 Awesome Slew, third in the Metropolitan (G1). 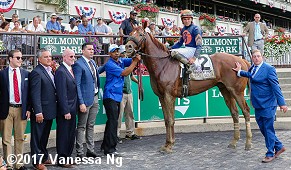 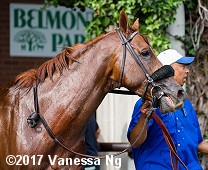 Left: Mind Your Biscuits in the winner's circle. Winning trainer Chad Summers said, "We know how good he was training going into this. There were still some doubters who said it was a subpar Dubai. We didn't think so. We know what he's capable of and we're ready for the rest of the year. It makes me think a mile won't be a problem for him, maybe a little bit further. He kept going and going and kicked away. You always have that doubt (coming back from Dubai). I didn't sleep at all last night. But the American horses have come back great. Stallwalkin' Dude won a stakes; Gun Runner...it's just one of those things where you cross your fingers and do everything you possibly can and you hope they come back OK. It showed today that he did. Once we saw Jose (Ortiz aboard Unified) stay with the pony, we figured he was going to try and rate today, so that's why we were closer."

Right: Mind Your Biscuits heads back to the barn. Winning jockey Joel Rosario said, "We were going 7 furlongs, so I thought maybe he should be a little bit closer. He broke very well and we settled behind some horses and then (Unified) came a little bit over me so I just had to be there and follow. I was in the perfect spot. He does everything on his own, easy. Everything he does is just right. He's great. He went to Dubai and won there and he comes back and wins again." 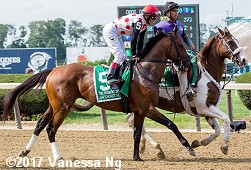 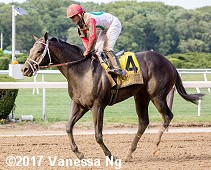 Left: Second place finisher Awesome Slew in the post parade. Jockey John Velazquez said, "He ran really well. I was right behind the winner, stalking him on the turn, but when I went outside, he had more than me."