There are two sprints held on Dubai World Cup night, one on the dirt and one on the turf and, new for 2017, both at the standard 6 furlong distance. The $2 million Gulf News Dubai Golden Shaheen (G1) is the feature sprint event on the card, contested at 1200 meters (about 6 furlongs) around one turn of the main track. Malibu (G1) winner and Breeders' Cup Sprint (G1) runner-up Mind Your Biscuits was the 9-5 favorite in the field of 14 off his close second in the Gulfstream Sprint (G3). In to challenge him included 9-2 second choice St. Joe Bay, winner of the Midnight Lute (G3) and Palos Verdes (G2), and 5-1 third choice Cool Cowboy, second in the Mahab Al Shimaal (G3) after winning the Al Shindagha Sprint (G3).

Jockey Sam Hitchcott sent 21-1 My Catch to the lead through fractions of 23.90 and 46.93 over the muddy main track while pressed by St. Joe Bay and stalked by 13-1 Morawij. My Catch tired at the top of the lane as St. Joe Bay gained a 1/2 length lead on 40-1 Comicas who had moved up to challenge from 7th early, getting 5f in 58.90. However, favorite Mind Your Biscuits, 10th early under Joel Rosario, closed with a rush on the outside to win going away by 1 1/2 lengths over Comicas, getting the muddy 6 furlong trip in 1:10.91. It was a neck back to Morawij third. 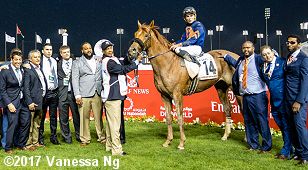 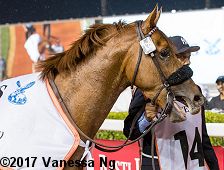 Left: Mind Your Biscuits in the winner's enclosure. Winning trainer Chad Summers said, "This is what we planned. It's a storybook ending to a story. It's a remarkable horse and it was a remarkable ride. I think he is the best sprinter in the country, in the world. He proved it today. It's unbelievable. Everything here is first class, it means a lot."

Right: Mind Your Biscuits heads back to the barn. Winning jockey Joel Rosario said, ""The post position was way outside. I think I got some ground in the turn, not much and then for a second I thought we might not get there. But he showed that he was the best horse in the race. I was so wide on the outside. I was thinking ‘is this is going to work'? But as I said he was the best horse in the race and I'm proud of him. He'd showed us the last couple of times, he ran very well in the Breeders' Cup and he won the Malibu, it was a very good race in America. And every time he runs he improves a little bit more." 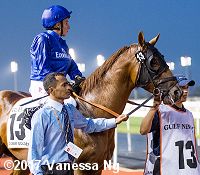 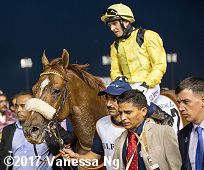 Left: Second place finisher Comicas heads out for the post parade. Jockey William Buick said, "He's run very well and it was a lifetime best from him. We were posted out quite deep which helped him in a way as we got a good run through, no kickback and no pressure early. You'd have to be very pleased with him and be very hopeful for next year in Dubai."

Right: Third place finisher Morawij returns after the race. Jockey Chris Hayes said, "I'm delighted with him. The telling factor was that he didn't face the kickback. It was his first time with that sort of kickback. We didn't go too fast in front, it was a sensible pace. He stayed on well, we nearly got second. The winner must be some horse."

The $1 million Azizi Developments Al Quoz Sprint (G1) is contested at 1200 meters (about 6 furlongs) on the turf straightaway at Meydan, a furlong longer than its original distance. A field of 12 went to post with Meydan Sprint (G3) winner Ertijaal sent off as the 2-1 favorite over 3-1 second choice Limato, 6th in the Breeders' Cup Mile (G1) after winning the Prix de la Foret (G1), and 9-2 third choice Amazing Kids, 4th in the Centenary Sprint Cup (G2).

Jockey Jim Crowley sent favorite Ertijaal to the lead down the chute through fractions of 24.22 and 45.72 while stalked by 80-1 Final Venture and 18-1 Richard's Boy. 20-1 The Right Man, who sat close up 5th early under Francois-Xavier Bertras, gained the lead at the 3/16 pole through 5f in 57.29. Kept to task by Bertras, The Right Man held off late-running 8-1 Long On Value to win by a nose in 1:09.59 over the yielding course. It was another 1 1/4 length back to Ertijaal third. 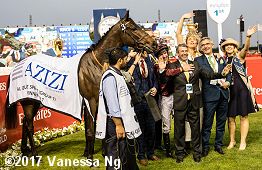 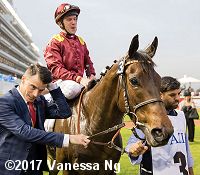 Left: The Right Man in the winner's enclosure. Winning trainer Didier Guillemin said, "20 years ago I would never imagine I'd win a Grade 1 here. This is an amazing achievement in my career. The horse ran well last time in his prep race. The horse is going to Hong Kong next if he's well and then maybe Royal Ascot."

Right: The right man parades after the race. Winning jockey Francois-Xavier Bertras said, "This is what we live for. Ertijaal took me along for a long way which helped. The horse was brave and that helped him win the race. I actually was quite confident because he wasn't 100 per cent fir for his prep race and I knew he'd improve." 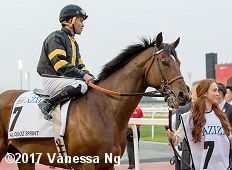 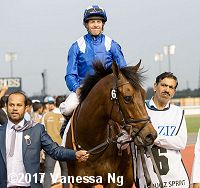 Left: Second place finisher Long On Value heads out to the track before the race. Assistant trainer Riley Mott said, "We're speechless. To come over here, halfway across the world, and compete with the top sprinters on the globe, we are just absolutely thrilled. I know it's a loss, but it feels like a win. The owners were true sportsmen to bring him over here and he did not let us down whatsoever." Jockey Joel Rosario added, "In the beginning everything went OK but I had to check back at a crucial stage and lost a bit of ground. I had a nice run through the closing stages. I thought for a second I might get there but the horse on the inside kept on running."

Right: Third place finisher and beaten favorite Ertijaal returns after the race. Jockey Jim Crowley said, "We travelled well but didn't pick up in the softer ground like he normally does. It's a shame the rain came. It was still a good run under the conditions. The ground and the longer trip have got him beat."