Kicking off the Dubai World Cup card on Saturday night, the $1 million Meydan Sobha Godolphin Mile (G2) featured a field of 13 older horses go 1600 meters (about 1 mile) around one turn of the main track at Meydan Racecourse in Dubai. Sharp Azteca was sent off as the 4-5 favorite off his win in the Gulfstream Park Handicap (G2) after finishing second in the Malibu (G2). In to challenge him included 2-1 second choice North America, winner of 4 straight all at Meydan including the Firebreak (G3) last out, and 7-1 third choice Heavy Metal, winner of the Burj Nahaar (G3), the main local prep for this race.

Jockey Richard Mullen sent North America to the lead exiting the chute through fractions of 23.22 and 45.56 over the muddy, sealed main track while stalked by 35-1 Gifted Master, Heavy Metal and Sharp Azteca. At the top of the lane Sharp Azteca inherited the lead form the tiring North America through 3/4 in 1:09.69. Sharp Azteca continued to lead to the 1/16 pole through 7f in 1:22.04, but Second Summer, last early, closed with a rush on the outside and outfinished Ross by a neck to win in 1:35.62. It was another 3/4 length back to favorite Sharp Azteca third. The race was marred by the breakdown of 45-1 Stormardal who unseated jockey Adrie de Vries at the 3/16 pole after racing midpack most of the way. He suffered a broken right foreleg and was euthanized. 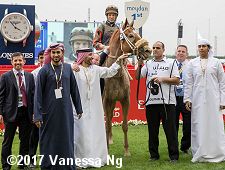 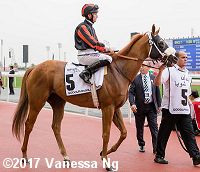 Left: Second Summer in the winner's enclosure. Winning trainer Doug Watson said, "I didn't quite expect this to happen. I didn't know if he could act on this ground. I think everybody was in the same boat. We have never had a sealed track over here. I'm sure he had some training on some sealed tracks in America. He came home so nicely. The German horse won outside, our horse won inside. Like Pat said, I don't think he would have liked to have been there a whole lot longer."

Right: Second Summer heads out to the track before the race. Winning jockey Pat Dobbs said, "When we turned in he picked up great. I got a nice clear run up the middle. Just as I was going around the American horse he shifted out on top of me and he kind of lost his momentum a little bit. But I think that helped him a little bit because he just pulls up in front." 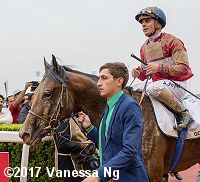 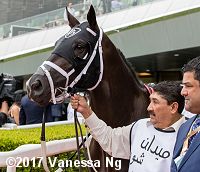 Left: Second place finisher Ross heads back to the barn after the race. Jockey Andrea Atzeni said, "The track's riding very fast, but at least it's not wet. The pace was strong. The horse is improving and loves that surface – he's getting better with each run and ran a great race."

Right: Third place finisher and beaten favorite Sharp Azteca in the paddock before the race. Jockey Edgard Zayas said, "He broke slowly. I had to use him up a bit earlier than I wanted. When he kicked on I thought we had it but he got tired in the last 50 meters. The start cost me." Trainer Jorge Navarro added, "I knew we were in trouble when I saw him move early." 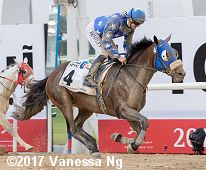 Results Chart for the race from Emirates Racing Authority. 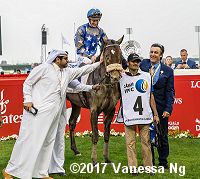 Reda in the winner's enclosure. Winning trainer Julian Smart said, "I didn't think anything could come from the back on this track," said his exuberant trainer. "But I tell you what, he is an underrated horse. We only got the invitation last Saturday and am I glad we did! He has only run one time only on the dirt in his career. We ran him a couple of weeks ago to see if he could handle it. And he has handled this." Jockey Harry Bentley added, "For the amount of kickback he was getting he faced it brilliantly. I was quite a long way back. He just kept persevering and around the bend. He was so full of running and it was just of matter of when he'd get there. When you've got that many horses ahead of you, you just worry about getting a clear passage. I got squeezed a bit around the top bend but things worked out for me. But I had so much horse underneath me. He'd only run once on the sand and that was in Qatar when he won. He was a horse that was really improving and I'd liked him a lot last year but he disappointed during the summer. He's really come of age and matured a lot."