The $2 million Al Naboodah Group UAE Derby (G2) over 1900 meters (1 3/16 miles) on the main track at Meydan is the only age-restricted race on World Cup night, open to 3-year-olds and worth 100 points to the winner as part of the Kentucky Derby Championship Series, however southern hemisphere 3-year-olds are recognized as 4-year-olds in the north and are not eligible for the Kentucky Derby. Thunder Snow was sent off as the 5-2 choice in the full field of 16 off wins in the Criterium International (G1) and the UAE 2000 Guineas (G3). In to challenge him included 4-1 Epicharis, undefeated in 4 starts including the Hyacinth Stakes last out, and 6-1 third choice Master Plan, winner of the Ocala Breeders Sales Championship in Florida. 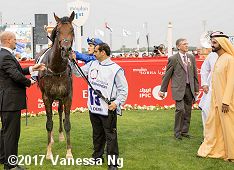 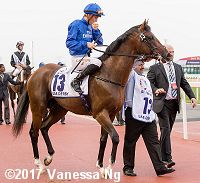 Left: Thunder Snow in the winner's enclosure with Sheikh Mohammed of Godolphin, on the far right. John Ferguson, Godolphin chief executive and racing manager said, "It was a very good performance and a really international race. You have a winner from Dubai and a horse from Japan and an American horse. It just shows how international the whole thing is. "From Thunder Snow's point of view, he did it in a good time, he showed he is very brave and it was a great performance. And His Highness has just mentioned that the Kentucky Derby is a possibility. It could be a great idea."

Right: Thunder Snow heads out to the track before the race. Winning jockey Christophe Soumillon said, "He got scared twice of the screen. I could feel when we came into the last turn, he put his nose completely on the left. He did not turn left. And when I came into the straight, he was just waiting for that screen. So I was trying to get him to concentrate. And fortunately when I arrived at the 150m marker, he just saw the marks from the gates on the ground. He got scared, he changed legs and he stopped. He hangs and I tried to keep him to concentrate. I knew it wasn't finished. I thought ‘you are doing it to me again', he was really giving it hard to me. I thought you never know, he might come back again. And he did. Today he showed me he was still a bit immature." 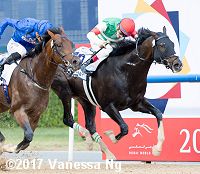 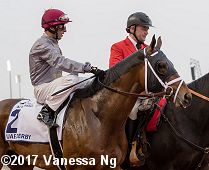 Left: Second place finisher and beaten favorite Epicharis tries to hold off Thunder Snow in the stretch. Jockey Christophe Lemaire said, "He was very brave. It was the first time he had been on this dirt but he answered very well and showed a lot of ability. It was a very close race but the winner was very strong and must have held some advantage at a home ground. He was very relaxed during the trip and showed his best run. It was defeat today but you would have to be happy."

Right: Third place finisher Master Plan heads out to the track before the race. Jockey John Velazquez said, "He didn't have the easiest run. He stayed on really well. He's a very nice horse."