The $6 million Longines Dubai Sheema Classic (G1) is the last of four scheduled turf races held on Dubai World Cup night. A field of 7 older horses went 2410 meters (about 1 1/2 miles), one complete circuit of the rain-soaked turf oval at Meydan Racecourse in Dubai. Defending champion Postponed was sent off as the 6-5 favorite off his second place finish in the Dubai City of Gold (G2). In to challenge him included 9-5 second choice Highland Reel, winner of the Breeders' Cup Turf (G1) before finishing second in the Hong Kong Vase (G1), and 9-2 third choice Jack Hobbs, third in the QIPCO Champion Stakes (G1). 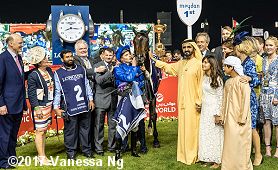 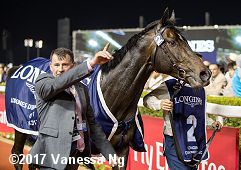 Left: Jack Hobbs in the winner's enclosure. Winning trainer John Gosden said, "First of all he liked the conditions, good to soft. Secondly, he had a long year off but ran brilliantly in the Champion Stakes, the form was amazing with Almanzor and Found. And then he just trained really well after this race and I was hopeful of a huge performance. So it didn't come as a big surprise, to be quite honest. We knew Ryan would play with the pace and he was very clever as he kept out of the chewed-up ground on the inside and we went wide and we got a beautiful lead off him. And in the straight it was an open horse race and everyone had his chance. And William waited, which was very wise as it is a long straight. He is a very fine horse, it has been a long road back." 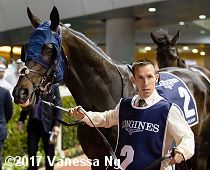 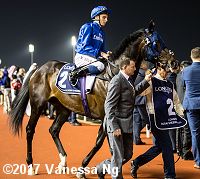 Left: Jack Hobbs in the paddock. Winning jockey William Buick said, "My plan was always to follow Highland Reel. Obviously I'm very pleased with the way the horse has done it. John said to me earlier in the week that he didn't think he had the horse in better shape. He was 100 per cent right. The horse really showed his true colours today. He has shown again that he is a top-class colt. He had a difficult year last year. And John got him back, it's a great training performance. He is a classy colt and we will hear more about him throughout the season."

Right: Jack Hobbs heads out to the track before the race 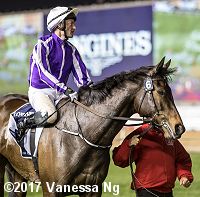 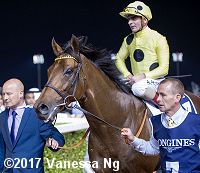 Left: Second place finisher Seventh Heaven behind the starting gate. Jockey Seamie Heffernan said, "I was a little disappointed when the rain came for all our horses. I think it cost some of them a few lengths. I rode her to run well and she didn't disappoint. She battled. She's a Classic winner and a double Group 1 winner. I was hoping she would be third at least, so I'm very happy."

Right: Third place finisher and beaten favorite Postponed returns after the race. Jockey Andrea Atzeni said, "I was travelling well in the right spot but he didn't let down like he can on that ground. But to be fair the winner was in a different league tonight. Our horse will come back."

The $1 million Al Tayer Motors Dubai Gold Cup (G2) is the longest race on World Cup night, contested at 3200 meters (about 2 miles) on the turf. Defending champion and Prix Royal-Oak (G1) winner Vazirabad was the 2-1 favorite in the field of 14 off his second place finish in the Nad al Sheba Trophy (G3). In to challenge him included 5-2 second choice Heartbreak City, a close second in the Melbourne Cup (G1) at Flemington, and 6-1 third choice Beautiful Romance, winner of the Zipping Classic (G2) and the Nad al Sheba Trophy (G3). 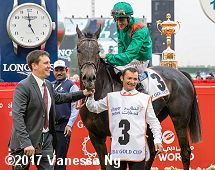 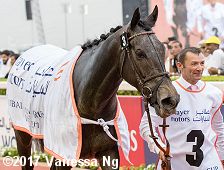 Left: Vazirabad in the winner's enclosure. He is the only repeat winner of the Dubai Gold Cup. Georges Rimaud, racing manager for owner The Aga Khan said, "We brought him here earlier this year to get used to the climate and he has done well in training. I was a little concerned when Christophe went inside in the straight but he knows his way round the track and has confidence in the horse."

Right: Vazirabad with his new winner's blanket. Winning jockey Christophe Soumillon said, "He didn't jump so good because he was moving a bit badly in the gate. I gave him the time to get into the race and fortunately for us the pace was quite good. I knew we could make up some lengths, especially on this ground, it's a bit difficult to finish today. When I came in the back straight the horse was much better than last time and he didn't hang. On the last corner I just preferred to stay on the inside to drop some lengths there. And when I came into the straight I knew he was going to give me a good turn of foot but I was not really sure I could arrive to take the lead in the end. When he passed the two horses he started to shift in a bit but then when he felt the field in front of him he just kept running. It's good to come on at the latest moment with him because he can be a bit green in front." 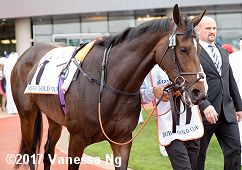 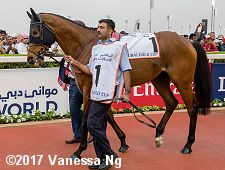 Left: Second place finisher Beautiful Romance in the walking ring. Jockey Oisin Murphy said, "There are no excuses and she's been beaten by Vazirabad, who was the best horse in the race. She's run a career-best race so I can't complain. I'm delighted to ride a horse as good as her. I'm one of the youngest jockeys riding here so to get beat is hard to swallow but it's great to be involved."

Right: Third place finisher Sheikhzayedroad in the walking ring. Jockey Martin Harley said, "He's rock solid and had a ice position. It was a great run and I think he might turn out to be an Ascot Gold Cup horse."