The $10 million Emirates Airline Dubai World Cup (G1), celebrating its 22nd renewal, highlights the world's richest day of racing, with $30 million in prize money over 9 races on Saturday night at Meydan Racecourse in Dubai. An unusually wet week in the Emirates downgraded the main track to muddy for the first time in the race's history (not including the postponed 1997 edition) and the turf course to yielding, with racetime temperatures in the mid 70's. A classy field of 14 older horses went to post for this 2000 meter (about 1 1/4 mile) trip around two turns of the main dirt track. As expected, Arrogate was the prohibitive favorite at the minimum odds of 1-9, winner of 6 straight including the Travers (G1), Breeders' Cup Classic (G1), and Pegasus World Cup. In to challenge him included 8-1 second choice Gun Runner, winner of the Clark Handicap (G1) and the Razorback Handicap (G3) after finishing second in the Breeders' Cup Dirt Mile (G1), and 21-1 third choice Hoppertunity, winner of last year's Jockey Club Gold Cup and here off his San Antonio (G2) win.

Arrogate inexplicably was slowest out of the gate as jockey Mickael Barzalona sent 206-1 longest shot Long River to the lead first time by to set the early fractions of 24.81 and 48.28 while pressed by Gun Runner and stalked by 59-1 Neolithic. On the far turn, jockey Florent Geroux sent Gun Runner to the front and he led the procession into the lane through 3/4 in 1:12.93 and 1 mile in 1:37.86. However, Arrogate, 3 wide around the clubhouse turn and 6 wide on the far turn, had moved up through the field, passing Gun Runner just inside the 1/8 pole. Kept to task by regular rider Mike Smith, Arrogate drew away late to an impressive 2 1/4 length victory in 2:02.15 over the muddy, sealed main track. It was another 5 lengths back to Neolithic third. Results for US wagering:

Results Chart for the race from Emirates Racing Authority which includes a link to the video replay. 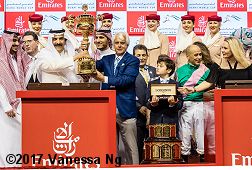 Left: Arrogate in the winner's enclosure. Winning trainer Bob Baffert said, "I can't believe we won. That is a great horse right there. It was terrible, terrible, he walked out of the gate. I tell you what, Mike Smith did a great job. He didn't panic, he just thought, well I just get him around there. Mike Smith, what a job he did. Unbelievable. This is the greatest horse we have seen since Secretariat. Unbelievable."

Right: The trophy presentation. Winning jockey Mike Smith said, "It was an extremely incredible performance. I honestly told myself, you know I rode the great mare Zenyatta and when I got away so bad, I thought 'you know what buddy, you can do it just like she did'. She used to run from back there and I know he can do anything. I'm just so blessed, God has blessed me so much, to give me a horse like this towards the end of my career is just, I'm lost for words, I'm am going to break down and cry. He is the best I have ever been on, he truly is. He is the world's horse now." 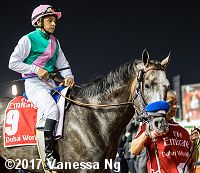 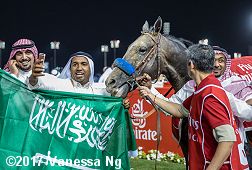 Left: Arrogate heads out to the track before the race. Smith added, "He was slipping and sliding from the word go. Once I got to the outside and he was straightened out, he levelled out. And I made up 5 lengths so quick, I thought OK, we are here. And now I just tried to be patient and not lose ground and let everybody work their way in, so that I didn't have to check out too wide and it worked out great. I had a lot of horse. Bob had a heart attack when he was here last time and I think I had one too! I had to get it pumping again after we got out!"

Right: Selfies with Arrogate in his winner's blanket after the race. Baffert added, "When I was watching it, I thought 'I hope Mike takes care of him', maybe I shouldn't have come here, it's unbelievable what he did. I was actually listening to the crowd and everybody was thinking, 'oh, he has no chance'. That was an incredible performance. When he turned for home, he started to give and maybe I thought 'this is it'. He did that. That is the best I have ever seen in my life." 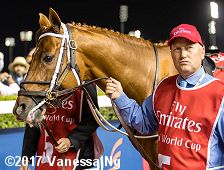 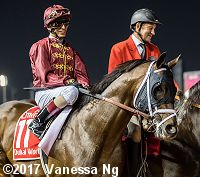 Left: Second place finisher Gun Runner in the paddock before the race. Jockey Florent Geroux said, "On the last turn, Long River started to back out and we took the lead and my horse was going really easily. He started flicking his ears back and forth and was cruising. I waited as long as I could, almost until the 1/8 pole, but Arrogate went by me. Gun Runner was trying and was fighting with him all the way to the end. He's still getting better and before I wasn't sure about the 1 1/4, but now as he's improving I think it's fine."

Right: Third place finisher Neolithic heads out to the track. Jockey John Velazquez said, "I was very happy with his run. He ran right up to his best. We were beaten by two better horses, and the winner, my God he is out of this world."