The richest races on the continent this weekend were run on Saturday at Parx Racing with two $1 million events run at the Bensalem, Pennsylvania oval. It was unusually warm for the first weekend of autumn, with sunny skies and temperatures in the high 80's, with the main track fast and the turf firm.

The co-feature race on Saturday was the $1 million Cotillion Stakes (G1), with a field of 11 3-year-old fillies going 1 1/16 miles on the main track. As expected Abel Tasman was sent off as the 4-5 favorite off a 3 race win streak including the Kentucky Oaks (G1), Acorn Stakes (G1), and the Coaching Club American Oaks (G1). In to challenge her included 5-1 second choice It Tiz Well, 5th in the Alabama (G1) after winning the Delaware Oaks (G3), and 11-2 third choice Lockdown, 6th in the Alabama.

Jockey Luis Saez sent Lockdown to the front first time by and she set fractions of 23.26, 47.27, and 1:11.37 while pressed by It Tiz Well and stalked by Abel Tasman. Entering the stretch, Abel Tasman moved up to challenge through 1 mile in 1:37.04, but It Tiz Well, in touch the whole way uynder Drayden Van Dyke, rallied past the favorite inside the 1/16 pole to win going away by 2 lengths in 1:43.67. It was another 3/4 length back to Lockdown third.

Also on the card was the Pennsylvania Derby (G1) won by West Coast. 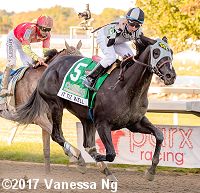 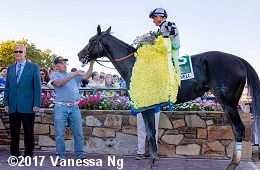 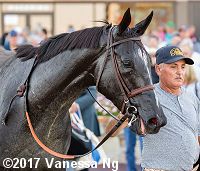 Left: It Tiz Well in the winner's circle. Dan Ward, assistant to winning trainer Jerry Hollendorfer said, "That's very satisfying. She has been running good races and improving all the time. I thought we had a good chance. I thought we might get that trip. She did a super job."

Right: It Tiz Well heads back to the barn after the race. Hollendorfer, who won last year's Cotillion with Songbird, added, "We thought she was training very well and we thought she'd have a good chance to win that race. We thought she would be tactical and she was today, that wasn't unexpected. I'm just very happy for her and for (owner) Tom Stull. It's a big race and she's coming around at the right time. Maybe we can get her in another big race before the end of the year. I haven't decided yet but I would like to look at the Breeders' Cup (Distaff)." 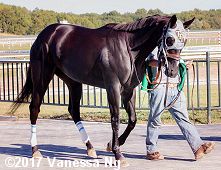 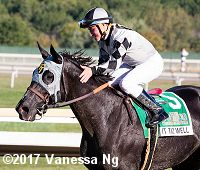 Left: It Tiz Well in the paddock before the race.

Right: It Tiz Well returns after the race. Winning jockey Drayden Van Dyke said, "She relaxed much better for me today. At Saratoga, she was on a dead rail. She ran today like she ran at Delaware Park. Set off the pace and relaxed, and when I called upon her she responded. She was perfect. When I saw Mike (Smith aboard Abel Tasman) coming up on the inside, and I sat off her and waited and they kind of went away from me for a few seconds and she was there for me the whole time." 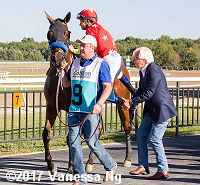 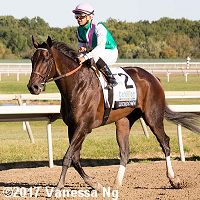 Left: Second place finisher and beaten favorite Abel Tasman in the paddock, with trainer Bob Baffert giving jockey Mike Smith a leg up. Smith said, "She broke slow away from there and dropped so far back and then she just wants to go. I tried to put her behind another horse but she just put her head up in the air. She pretty much ran off with me. I didn't ask her to go. It was her idea." Trainer Bob Baffert added, "She's starting to do the same thing every time. She drops back and then gets rank. We'll have to do something with her. Maybe take the blinkers off. She got away with it last time but not today."

The fillies break from the gate for the Cotillion. 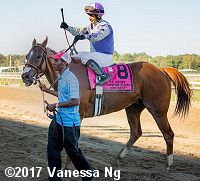 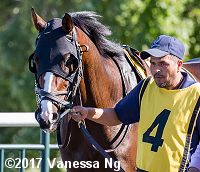 Left: Page McKenney heads to the winner's circle. Winning jockey Horacio Karamanos said, "I didn't want him to get rank, so I let him move up outside that other horse. He gave me everything he had, just like he always does. He's a fighter."


Kicking off the stakes action was the $100,000 Alphabet Soup Handicap for older Pennsylvania-breds going 1 1/16 miles on the turf. Tasit, 3rd in an allowance last out and winless since April 2016 was the even-money favorite in the field of 8 over 3-1 Firsthand Report, winner of the Power By Far Stakes and the only filly in the field, and 4-1 Bern' James Bern, 2nd in an allowance last out.

Jockey Javier Castellano sent Firsthand Report to the lead first time by and he set fractions of 22.95, 46.33, and 1:10.45 over the firm going while pressed by 76-1 longest shot Tactical Plan and stalked by 13-1 Uncle Dave. Entering the lane, Firsthand Report continued to lead through 1 mile in 1:34.98. Bern' James Bern, 6th early, came out wide for the drive and rallied strongly but Firsthand Report held him off by a nose in 1:40.67. It was another 2 lengths back to 8-1 Edge of Reality third, while Tasit checked in 5th. 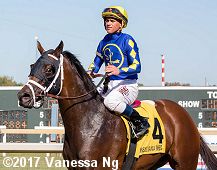 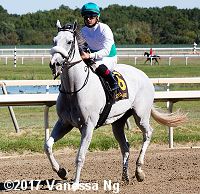 Right: Fifth place finisher and beaten favorite Tasit returns after the race. The Michael Matz trainee has a record of 2 wins, 1 second, and 2 thirds in 11 starts, earning $87,225 for owner-breeder Augustin Stable (George Strawbridge).