The $10 million Dubai World Cup (G1), celebrating its 21st renewal, is the world's richest horse race and the highlight of the world's richest day of racing, with $30 million in prize money over 9 races on Saturday night at Meydan Racecourse in Dubai. A classy field of 12 older horses went to post under clear skies and temperatures in the low 80's for the 2000 meter (about 1 1/4 mile) trip around two turns of the main dirt track. As expected, last year's runner-up California Chrome was sent off as the 6-5 favorite off wins in the San Pasqual (G2) and the Trans Gulf Electromechanical Trophy Handicap. In to challenge him included 2-1 second choice Frosted, winner of the Pennsylvania Derby (G2) but 7th in the Breeders' Cup Classic (G1) before winning the Al Maktoum Challenge Round 2 (G2), and 6-1 third choice Mshawish, winner of the Hal's Hope (G3) and Donn Handicap (G1) after finishing fourth in both the Breeders' Cup Mile (G1) and Cigar Mile (G1).

Jockey Frankie Dettori sent Mshawish to the lead first time past the stands and he set fractions of 25.39, 48.98, and 1:12.57 over the fast main track while pressed by 14-1 Special Fighter and stalked by favorite California Chrome parked 4-wide under Victor Espinoza. On the far turn, 18-1 Mubtaahij slipped through on the rail as California Chrome, now 5 wide, swept to a short lead through 1 mile in 1:37.25. California Chrome, under confident handling by Espinoza despite his saddle slipping, opened up by 1 3/4 lengths in midstretch through 1 1/8 miles in 1:49.50, and cruised the rest of the way, finishing up 3 3/4 lengths in front in a new track record time of 2:01.83. It was a neck back to late-running Hoppertunity third. Results for US wagering:

Results Chart for the race from Emirates Racing Authority which includes a link to the video replay. 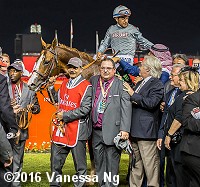 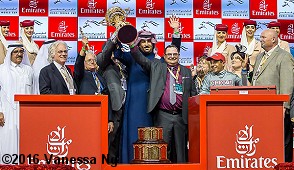 Left: California Chrome in the winner's enclosure. He is now the top all-time money earner in North America with $12,532,650 total. Winning trainer Art Sherman said, "This is just unbelievable for me now he's the world's richest horse in earnings and it's quite an achievement to have a horse from a two-year-old and see him now as a five-year-old it's just a gift. I've been very fortunate to have a horse like this. Victor knows him, he did a super job. He is a once in a lifetime horse. You really get attached to horses like him. My son (Alan) did a fantastic job. Thanks to Dubai."

Right: The trophy presentation with owner Perry Martin on the far right. Martin said, "I believe we have three Japaneses horses to pass (in purse earnings). I believe we'll do that before the end of the year. Depending on what (Rood and Riddle veterinarians) tell us, we'll know how long his layoff's going to be." He wants to go in the Breeders' Cup Classic at Santa Anita, the proposed $12 million Pegasus Championship at Gulfstream in January, and then try for a repeat in the Dubai World Cup. 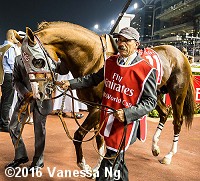 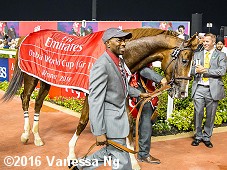 Left: California Chrome in the paddock before the race. Winning jockey Victor Espinoza said, "I'm just trying to keep my balance and not move my body. I wasn't that concerned about (the slipped saddle), I just kept looking forward and thinking 'where's the wire?'. It was not coming fast enough. I felt like if I could hit the turn three or four wide I'll be in good shape."

Right: California Chrome parades with his winner's blanket after the race. Espinoza added, "Today it proves how he can run when he's 100 per cent. The prep he felt strong. He won easy. I didn't want to override him because I knew he was going to have a tough race today. My goal after winning the Triple Crown was to win the Dubai World Cup. Last year he finished second and it was not very fun." 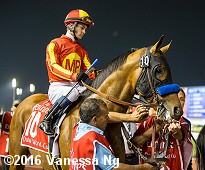 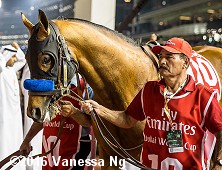 Left: Second place finisher Mubtaahij heads out to the track. Jockey Christophe Soumillon said, "He's back to his best. It was an excellent run. I had a nice position but California Chrome is just a superb horse."

Right: Third place finisher Hoppertunity in the paddock before the race. Jockey Flavien Prat said, "Because of a wider gate, he wss a bit deep on the track but he ran great in the stretch, finished off very strongly. It's an even better run because that sort of track is different to what he's used to at home. I'm very happy."