There are two sprints held on Dubai World Cup night, one on the dirt and one on the turf. The $2 million Dubai Golden Shaheen (G1) is the feature sprint event on the card, contested at 1200 meters (about 6 furlongs) around one turn of the main track. Gulfstream Park Sprint (G3) and Sunshine Millions Sprint winner X Y Jet was sent off as the 9-10 favorite in the field of 10. In to challenge him included 9-2 second choice Confrontation, winner of the Firebreak Stakes (G3), and 5-1 third choice Super Jockey, last year's runner-up and 2nd in the Friendship Bridge Handicap at Sha Tin.

Jockey Emisael Jaramillo sent X Y Jet to the front immediately and he clicked off an opening quarter in 23.54 while pressed by 10-1 Rich Tapestry and stalked by 7-1 Muarrab. At the 3/8 pole Muarrab came out for room and collared the pacesetting favorite at the top of the lane through a half in 46.32, setting up a duel to the line. Muarrab gained a half length lead at the 1/8 pole through 5/8 in 58.10, and was able to hold off X Y Jet by just a neck at the line in 1:10.59 over the fast main track. It was a long 3 3/4 lengths back to 79-1 longest shot Morawij third. 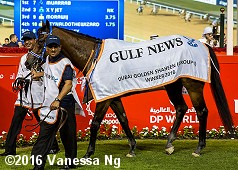 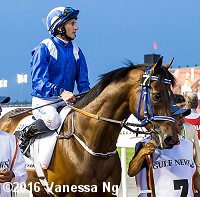 Left: Muarrab in the winner's enclosure. Winning trainer Musabah Al Muhairi said, “I am not surprised. This horse just gets better.”

Right: Muarrab heads out to the track before the race. Winning jockey Paul Hanagan said, “Those last 200m felt like a long way, to be honest. Every time I kind of got his head in front, the second horse kept battling back with me. When it’s like that, it’s too close for comfort. But I knew my horse is so genuine and tough that he would give his all for me, which he did.” 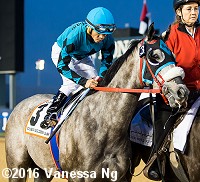 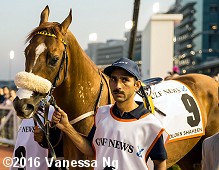 Left: Second place finisher and beaten favorite X Y Jet in the post parade. Trainer Jorge Navarro said, "I am very proud—you cannot ask for more than that. What he accomplished was big. We'll come back next year." Jockey Emisael Jaramillo added, "He's run his heart out. There was no let up and there was no chance to get a breather. He still managed to run like a champion. He was very tough to pass and it was only close to the wire that the winner got past."

Right: Third place finisher Morawij in the paddock before the race. Jockey Chris Hayes said, "I was very happy. It was the first time on that surface and the first time over that trip with a bend. I used up a bit of gas at the wrong time because of the draw. He'll be back next year. He's a good horse."

The $1 million Al Quoz Sprint (G1) is contested at 1000 meters (about 5 furlongs) on the turf straightaway at Meydan. A field of 13 went to post with Breeders' Cup Turf Sprint (G1) runner-up Lady Shipman sent off as the 2-1 favorite over 7-2 second choice Ertijaal, winner of the Billet Trophy, and 7-1 third choice Peniaphobia, winner of the Hong Kong Sprint (G1).

Jockey Damian Browne sent 12-1 Buffering to the lead exiting the chute and he set fractions of 23.60 and 44.69 while pressed by Peniaphobia and stalked by Lady Shipman and Ertijaal. At the 1/8 pole Buffering continued to lead by 1/2 a length, and steadily extended his lead to win by 3/4 length in 56.34 seconds. It was a neck back to Peniaphobia third, while favorite Lady Shipman failed to rally and checked in seventh. 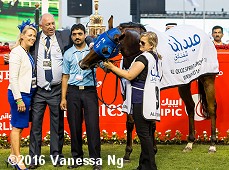 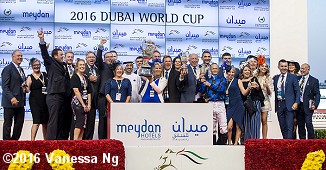 Left: Buffering in the winner's enclosure. Winning trainer Robert Heathcote said, "I knew he would be hard to beat once I saw Damian sitting motionless on him halfway up the straight. It took him 18 attempts to win a Group 1 but now he has won seven of them in his last 13 tries. He's such a popular horse back home. I think it is part of our Aussie psyche as he was an underdog for so long. He has raced against the likes of Black Caviar, Hay List and Sepoy but now he has shown that he is a pretty good horse himself. He has run a time which is a career best for him and he has done it at the age of eight."

Right: The trophy presentation with the happy connections. Winning jockey Damian Browne said, "He was in terrific form before the race. He broke really well, to be honest beforehand I was more worried about the first 200m, thinking some of the others might have been a bit too quick for him. Once he was able to travel I was pretty confident we were going to win." 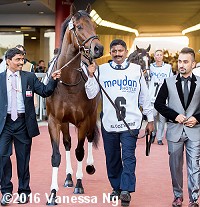 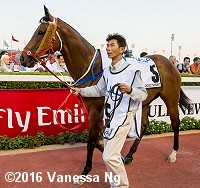 Left: Second place finisher Ertijaal in the paddock before the race. Jockey Paul Hanagan said, "He got very upset in the gates, he can have his day in the gates. The more upset he gets the more it can affect him. Having said that he had every chance and we can't take anything away from the winner."

Right: Third place finisher Peniaphobia in the walking ring before the race. Jockey Joao Moreira said, "He tries very hard, it was just unlucky to find two better horses on the day. The pace was very hot but I was where I wanted to be. Buffering came sooner than I thought he would and seemed to be going further away. But I'm very happy he only beat me a length." 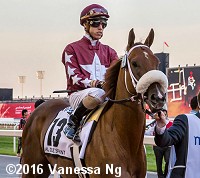 Seventh place finisher and beaten favorite Lady Shipman. Jockey Irad Ortiz Jr. said, "She looked to the side when they sprung the gate and broke a little slow. She put me in a good position on her own. She just didn't go on. That is not her race. She would have done well with a better break."