2016 Oaklawn Racing Festival of the South

Kicking off the graded stakes action on Arkansas Derby day, the $600,000 Oaklawn Handicap (G2) featured a field of 8 older horses going 1 1/8 miles on the main track. Breeders' Cup Classic (G1) runner-up Effinex was sent off as the 8-5 favorite off his third place finish in the Santa Anita Handicap (G1). In to challenge him included 2-1 second choice Melatonin, winner of the Santa Anita Handicap, and 5-1 third choice Blofeld, winner of the Gulfstream Park Handicap (G2).

Also check out Creator winning the Arkansas Derby and Forever Unbridled winning the Apple Blossom during the Racing Festival of the South at Oaklawn.

Past winners of the Oaklawn Handicap 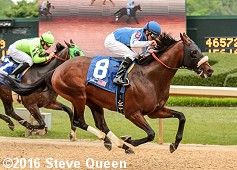 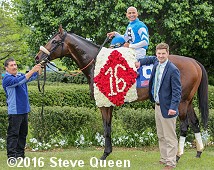 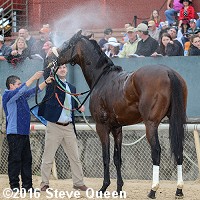 Left: Effinex in the winner's circle. Winning trainer Jimmy Jerkens said, "I am very pleased with what he did today. He stayed closer to the pace than he's used to doing. He really likes that track, and he likes it fast like that. He grabbed it right away, which I was happy to see because I thought he was going to end up losing too much ground coming out of the gate. Mike let him run a little more to cross over and that was a good job on his part."

Right: Effinex gets hosed off after the race. Racing manager Russell Cohen added, "He did what good horses do: Just dug in. The horse has the DNA and the heart of a champion, and I'm proud of him. (Melatonin) hung in there tough. He's a good horse, a real competitor. Effinex is really game. He's running to his pedigree. What we do is to some degree limited. The horse is just plain talented. Jimmy Jerkens has done a fabulous job with the horse, all the connections. I take very little credit for it. I have a great braintrust of people surrounding me, taking advice from a lot of really smart people." 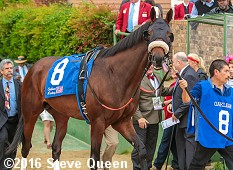 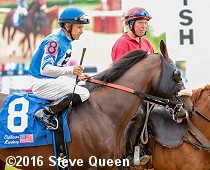 Left: Effinex heads out to the track for the race.

Right: Effinex in the post parade. Winning jockey Mike Smith said, "He was a different horse today. He just wasn't happy in California because of the hives. He battled with Melatonin down the backside and just kicked it into another gear." 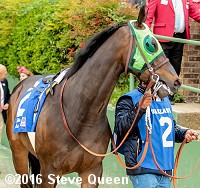 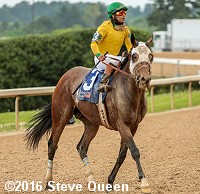 Left: Second place finisher Melatonin heads out to the track before the race. Jockey Joe Talamo said, "We had a great trip, the winner was to the outside of me the whole way. My horse tried hard and gave a great effort. I was very proud of his race. He ran a great race in defeat." Trainer David Hofmans added, "Effinex didn't let us get an easy enough lead. He pressured us the whole time. It was kind of a reversal of what happened in California. We got an easier lead, able to relax a little more. He was a better horse today." 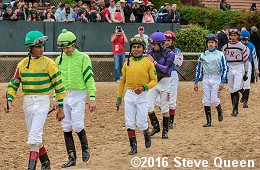 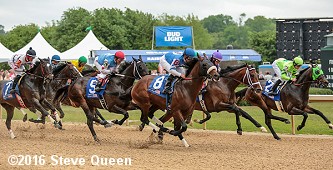 Left: The jockeys for the Oaklawn Handicap head out to the infield walking ring.

Right: Shortly after the start of the Oaklawn Handicap. Jockey Martin Garcia on Point Piper (post 3) said, "I stayed on the rail for most of the trip and turning for home we moved around horses and got a good kick. He was running but the other horses in front where much the best today. My horse ran one of his best races today and I'm proud of him for that." 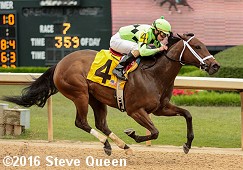 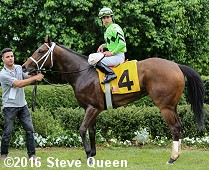 The first stakes race on Arkansas Derby was the $150,000 Instant Racing Stakes featuring a field of 6 three-year-old fillies sprinting 6 furlongs. Jockey Ricardo Santana Jr. sent 13-2 Simple Surprise to the lead exiting the chute and she set fractions of 22.67 and 46.74 while pressed by 9-4 second choice Cash Back and stalked by 2-1 favorite Durango. Entering the lane Cash Back hained a short lead through 5/8 in 58.88, and drew off to win by 2 lengths over Durango in 1:11.30. It was another neck back to Simple Surprise third.

Winning trainer Brad Cox said, "She ran good. She's now won on both surfaces (dirt and turf). She's a nice filly and she showed up on the dirt today, which was a little unknown fact." Cash Back could go next in either the Eight Belles at Churchill Downs or the Miss Preakness at Pimlico.