Pegasus World Cup (G1) day at Gulfstream Park was conducted under less than ideal conditions, as rain downgraded the main track to sloppy-sealed and the turf course to yielding, with temperatures in the low 60's and 10 MPH winds. There were 7 stakes races on the undercard, 4 of which were graded. Gulfstream Park general manager Bill Badgett said, "It was an incredible day of racing and entertainment. There was great energy throughout the building, and despite the conditions with three off-the-turf races, the day was a great success and continues to build on The Stronach Group's modernization of Thoroughbred racing. We want to thank the fans, horsemen, and athletes." 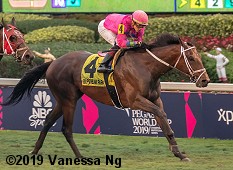 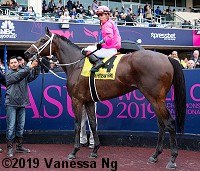 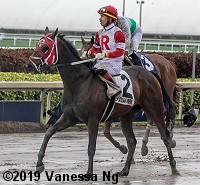 Left: Zulu Alpha in the winner's circle. Winning trainer Mike Maker, who completed the exacta said, "It's always nice when you get a result like this. Both horses got good rides and ran big races." 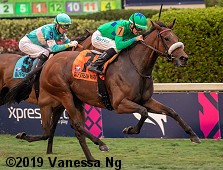 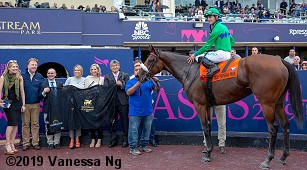 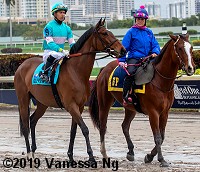 Left: Si Que Es Buena in the winner's circle. Winning trainer Graham Motion said, "She's a cool filly. What a great ride. Gosh, he's riding good, this kid. I really hadn't ridden him until he came to Gulfstream. He rode her very patiently. She's had two big races pretty close together. I won't be in a hurry to run her back, to be honest. She handled softish ground at Aqueduct." Jockey Chris Landeros added, "She's pretty cool, very game mare. I think she's just getting better with the extra distance, and Graham had her primed and ready, as always. I'm just blessed to be a part of her. I think the sky's the limit. Let's just see where we go. I think she's doing really well. She has her confidence. Graham knows her and is getting to know her even more, and she's a happy horse." 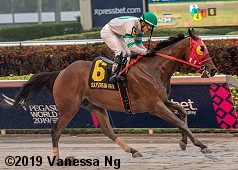 The $150,000 Fred W. Hooper Stakes (G3) featured a field of 8 older horses going 1 mile around one turn of the main track. Cigar Mile (G1) last place finisher Copper Town was sent off as the 3-2 favorite over 5-2 Aztec Sense, winner of the Claiming Crown Jewel, and 11-4 Breaking Lucky, 8th in the Lukas Classic (G3). Aztec Sense and 14-1 Conquest Big E dueled for the lead exiting the chute through fractions of 23.10, 45.10, and 1:09.88 while stalked by Breaking Lucky and Copper Town. Turning for home Conquest Big E tired allowing Aztec Sense to inherit the lead through 7f in 1:22.63. Kept to task by Emisael Jaramillo, Aztec Sense drew off to win by 1 3/4 lengths over Breaking Lucky in 1:36.22. It was a neck back to 70-1 longest shot Fellowship third, while Copper Town faded to 7th. However, Aztec Sense took a bad step galloping out, was pulled up by Jaramillo on the backstretch, and was vanned back to the barn. 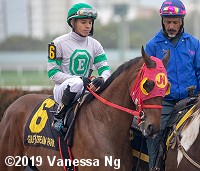 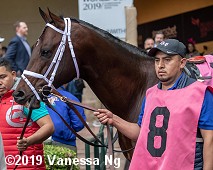 Left: Aztec Sense in the post parade. Trainer Jorge Navarro, also celebrating his 1,000th career win, said, "He took a bad step. It looks like the left ankle. My vets are waiting for him. Oh my God, what a racehorse – the heart he has. (Win number 1,000) came at a bad moment, but I'll take it. I'm happy. It will hit me later on." 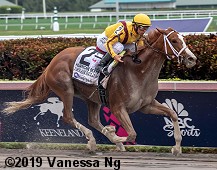 A field of 8 older fillies and mares contested the $150,000 Hurricane Bertie Stakes (G3) at 7 furlongs on the main track. Comely (G3) winner Blamed was sent off as the 2-1 favorite over 9-4 Shamrock Rose, winner of the Breeders' Cup Filly and Mare Sprint (G1), and 11-4 Dream Pauline, winner of the Sugar Swirl (G3). Jockey Julien Leparoux sent Blamed to the lead through fractons of 22.58 and 45.18 while pressed by Stormy Embrace and stalked by Dream Pauline. Into the lane Dream Pauline slipped through on the inside to lead through 3/4 in 1:09.50. Kept to task by Javier Castellanom, Dream Pauline drew off to win by 3 1/2 lengths over 44-1 Pacific Gale in 1:21.45. It was another 1 1/4 length back to Stormy Embrace third while Blamed faded to 5th. 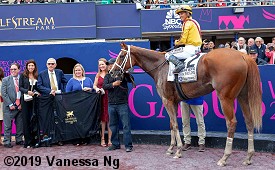 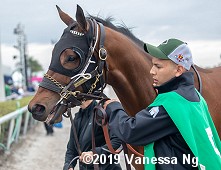 Left: Dream Pauline in the winner's circle. Winning trainer Kiaran McLaughlin said, "She's a special filly. We've always been high on her. She's been a little unlucky, like not getting in the Raven Run, like having a temperature before the Prioress. But she's a nice filly and Javier rode a great race today. Obviously, she's won twice her on the wet, so she likes the wet."

Right: Fifth place finisher and beaten favorite Blamed walks over before the race. 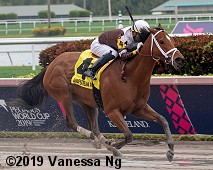 The $175,000 Ladies' Turf Sprint Stakes was scheduled for 5 furlongs on turf but was moved to the sloppy main track. After 5 scratches Smiling Causeway was the 6-5 favorite in the field of 5 over 9-5 Cherry Lodge and 7-2 Just Talkin. Jockey Jose Ortiz sent Cherry Lodge to the front immediately through fractions of 22.27 and 44.69 while stalked by Just Talkin and 13-2 Razorback Lady. In the stretch, Cherry Lodge cruised to win by 1 3/4 lengths over Just Talkin in 57.10. It was a long 6 lengths back to Razorback Lady third, and 2 1/2 more to favorite Smiling Causeway fourth. 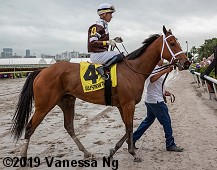 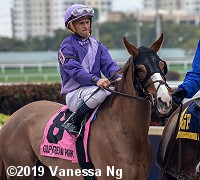 Left: Cherry Lodge heads to the winner's circle. Winning trainer Todd Pletcher said, "To be honest, I thought our chances improved when it was taken off the turf," Pletcher said. "She'd been training well on dirt. I actually gave some thought about running her in the Hurricane Bertie based on the strength of her last dirt breeze, but it seemed like it was coming up to be such a tough race, we opted to go in here. She got away alertly and the track has been playing well to speed. Our strategy was pretty straightforward: try to make the lead. She responded gamely." 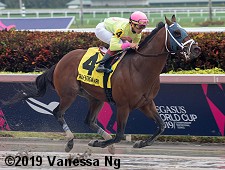 Kicking off the stakes action on Saturday was the $150,000 Gulfstream Park Turf Sprint, originally scheduled for 5 furlongs on turf but was moved to the sloppy main track. After 3 scrratches including Breeders' Cup Turf Sprint (G1) winner Stormy Liberal, World of Trouble was the 1-5 favorite in the field of 5 over 3-1 Recruiting Ready and 9-1 Singandcryindubai. Jockey Irad Ortiz Jr. sent World of Trouble to the lead through fractions of 22.18 and 44.37 while pressed by Recruiting Ready and stalked by Singandcryindubai. In the stretch World of Trouble opened up on the field, cruising to win by 2 3/4 lengths over Recruiting Ready in 56.44. It was another 3 3/4 lengths back to 66-1 longest shot Belle Tapisserie third. 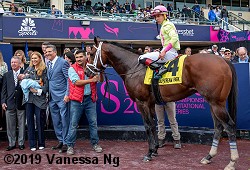 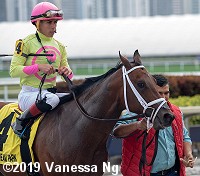 Left: World of Trouble in the winner's circle. Winning trainer Jason Servis said, "We couldn't get bandages on him behind. I mean the whole thing coming to the race, I really wasn't thrilled about. And he was just doing OK. So getting it done, man, was gratifying. He ran on no toe grabs. I was happy with the mud, but he's not an easy horse to deal with. We had a hard time getting the bridle on him, and the back bandages. He's a runner. 1 1/16 miles in the Tampa Bay Derby. He doesn't want to run 1 1/16, but he hung in there. Mike Dubb will map out (his schedule). I guess Keeneland is on the radar, New York."

Right: World of Trouble circles after the racce. Winning jockey Irad Ortiz Jr. said, "He's a nice horse. He broke well so I just tried to hold it together. When I asked him to go he just exploded. Jason let me ride him the way I wanted. I've been on him a few times now, so our confidence is high." 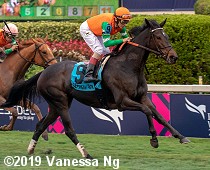 The $125,000 South Beach Stakes featured a field of 13 older fillies and mares going 7 1/2 furlongs on the turf. Road to Victory was the 5-2 favorite over 3-1 Dolce Lili and 5-1 Andina Del Sur. 8-1 Everyonelovesjimmy dueled for the lead with Road to Victory through fractions of 24.34 and 49.83 while stalked by 32-1 Piedi Bianchi and Andina Del Sur. Entering the lane, the pacesetters tired as Andina Del Sur inherited the lead through 3/4 in 1:15.14. Dolce Lili, 8th early unde John Velazquez, came out 4 wide to challenge and outfinished 12-1 Conquest Hardcandy late to win by 1/2 a length in 1:33.63. It was another 1/2 length backl to 6-1 Fire Key third, while Road to Victory faded to 12th. 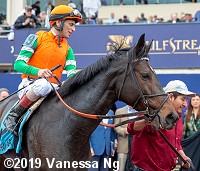 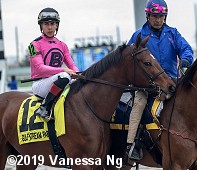 Left: Dolce Lili heads to the winner's circle. Winning trainer Bill Mott said, "With all the rain, we were very lucky to have a horse that handles the soft going. We didn't think it would hurt us going in. She's been doing well. We're really happy with her. She's progressed nicely and ran good today."