The first running of the $7 million Pegasus World Cup Turf Invitational (G1), formerly run as the Gulfstream Park Turf Handicap, was contested on Saturday afternoon at Gulfstream Park in south Florida. Rains earlier in the day downgraded the turf course to yielding, with temperatures in the low 60's. A field of 10 older horses went to post for this 1 3/16 mile contest, with Yoshida sent off as the 2-1 favorite, 4th in the Breeders' Cup Classic (G1) after winning the Woodward (G1). In to challenge him included 11-4 second choice Bricks and Mortar, an allowance winner after finishing 3rd in the Hill Prince (G3), and 13-2 thrd choice Catapult, 2nd in the Breeders' Cup Mile (G1) after winning the Eddie Read (G2) and Del Mar Mile (G2).

Jockey Edwin Maldonado sent 42-1 Fahan Mura to the lead first time by through fractions of 22.94 and 47.93 while prssed by 9-1 Aerolithe and stalked by 119-1 Dubby Dubbie. On the backstretch, Catapult moved up to lead through 3/4 in 1:11.60. Entering the lane, jockey Frankie Dettori sent 9-1 Delta Prince to lead through 1 mile in 1:36.64, but Bricks and Mortar, 6th early under Irad Ortiz Jr., swept to the front 4 wide and drew off late to win by 2 1/2 lengths over late-running 9-1 Magic Wand in 1:54.59. It was a neck back to Delta Prince third, while favorite Yoshida trailed throughout and passed tired horses late to check in 6th. 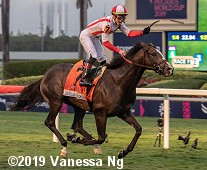 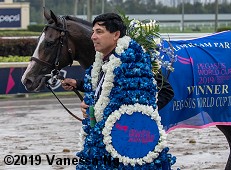 Left: Bricks and Mortar in the winner's circle. Winning trainer Chad Brown said, "Irad rode him beautiful. The horse came ready and handled the course. Everything worked out perfectly. For a little while there, I didn't think I'd have a horse for the race. I had been resting a lot of them. Bricks and Mortar came in fresh when I was resting other ones. Thanks to Seth [Klarman] and Bill [Lawrence], they were game enough to put up a big entry fee and give it a shot. The horse just performed beautifully."

Right: Bricks and Mortar heads back to the barn after the race. Winning jockey Irad Ortiz Jr. said, "I got a perfect trip. My horse put me in a good position and just held it together, saving ground. When I got kicked him out, he exploded. The horse is good, but the trainer we have to get him credit. He gave him some time off and brought him back, give him one race in the allowance race and bring him back ready for this race. That's a lot of work. Not too many trainers can do that. He's got good horses, but he knows what he's doing, and he's really good, too." 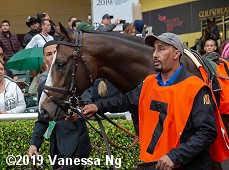 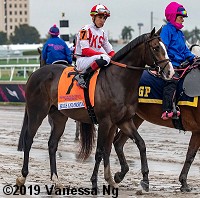 Left: Bricks and Mortar in the paddock. Brown added, "Ian Brennan at Stonestreet Farm did a terrific job rehabbing this horse. Dr. Larry Bramlage worked on this horse about 16 months ago when it looked like he might have a career-ending injury. He fixed him. There was a lot of teamwork, a lot of patience. When you go into a race this big take a big gamble, it paid off today." 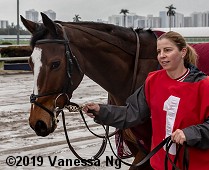 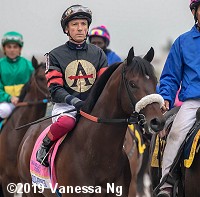 Left: Second place finisher Magic Wand walks over before the race. The 9-1 shot settled in 5th early under Wayne Lordan then rallied 2 wide to get 2nd. The Aidan O'Brien trainee improved her record to 2 wins, 3 seconds, and 1 third in 11 starts, earning $1,453,976 for owners Michael Tabor, Derrick Smith, Susan Magnier, and Markus Jooste.

Right: Third place finisher Delta Prince in the post parade. Jockey Frankie Dettori said, "He ran a super race. He has a big heart. He was going so well that I thought turning for home, ‘We've got this.' Just got outrun by two good horses in the end. Super effort. It paid for the expenses - and the night out." Trainer Jimmy Jerkens added, "Frankie had him in a nice spot and he made a nice gradual move. He looked awful tough turning for home but that turf is soft and that was a good horse who won it obviously. Maybe if my horse had been out in a little bit better part of the turf where there haven't been as many horses running but [the winner] just pulled away from us. [Delta Prince] just got a little tired at the end to lose second but we were really thrilled with his effort." 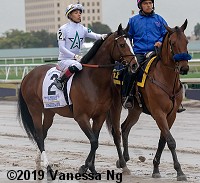 Sixth place finisher and beaten favorite Yoshida in the post parade. Jockey Jose Ortiz said, "He broke good. He was last but he was in touch with the field and I saved ground. By the backside I wanted to go on but then Channel Maker got position on me so I had to take back a little and drop back in, and I followed Irad from that point on and I thought that I was in a good position before we hit the three-eighths pole but he didn't give me that late kick." Trainer Bill Mott added, "The bottom line is he wasn't making up much ground on them from the eighth pole to the wire. I'm not going to give him a huge excuse. As it turns out, maybe Yoshida is going to be better on the dirt."