The feature race on Saturday at Del Mar was the $200,000 San Diego Handicap (G2) for older horses at 1 1/16 miles on the main track. Conditions were excellent at the seaside oval for the 21,336 fans in attendance, with sunny skies and temperatures in the low 70's. California Chrome was sent off as the 4-5 favorite in the field of 5 off a 3 race win streak including he San Pasqual (G2) at Santas Anita followed by the Trans Gulf Electromechanical Trophy Handicap and Gold Cup (G1) at Meydan. In to challenge him included 6-5 second choice Dortmund, unraced since winning the Native Diver (G3) in November, and 6-1 third choice Win the Space, second in the Gold Cup (G1) at Santa Anita.

Jockey Gary Stevens sent Dortmund to a clear lead first time by and he set fractions of 23.47, 47.02, and 1:10.51 while pressed by California Chrome and stalked by Win the Space. At the top of the lane jockey Victor Espinoza sent California Chrome to challenge, gaining a short lead at the 3/16 setting up a match race to the finish. The pair battled the rest of the way, with California Chrome pulling away in the final strides for the hard-fought 1/2 length victory in 1:40.84 over the fast track. It was a long 7 1/4 lengths back to Win the Space third. 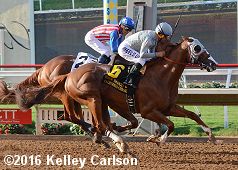 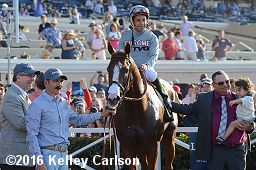 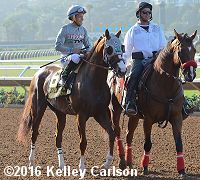 Left: California Chrome in the winner's circle. Winning trainer Art Sherman said, "Dortmund made him work for it. It's going to be an interesting few races coming up. I told Victor the track has been playing to speed all day long and you can't let a horse like Dortmund get away. So press him as much as you can I think both horses needed a race and you'll see two stronger horses coming back in the Pacific Classic. (Chrome) is that kind of horse, he loves to grind it out and he shows a lot of determination. I'm always worried. I've never seen one race where I wasn't worried."

Right: California Chrome in the post parade. Winning jockey Victor Espinoza said, "I saved something for the end. I knew I'd have to. I have a lot of respect for Dortmund and he made me run hard. I could see (Dortmund) was running so hard. When we came down the stretch, I was concerned. This horse was carrying a lot of weight; that was the challenge. But he was a runner all the way today. What a terrific comeback race for him. He's back. He's such a special horse. This was exciting; an exciting race. He showed everyone today just how special he is. Now maybe he and Dortmund and Beholder (in the Pacific Classic). That will really be exciting." 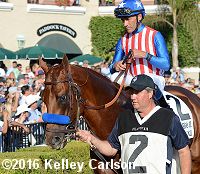 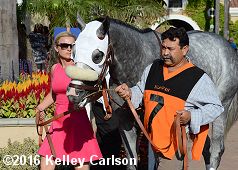 Left: Second place finisher Dortmund in the paddock before the race. Jockey Gary Stevens said, "He was a little funky with me in the gate and we didn't get away the best. But he got rolling and we were doing good. We had the slow fractions I was hoping for and he was going along fine. Then from about the 3/8th (pole) or the 5/16th (pole), it was on. I thought maybe we were going to run out of gas, but he kept digging. He ran that last quarter mile on heart. I looked over and saw Victor was scrubbing (on California Chrome) and I thought maybe I had a chance. My horse gave it a great try. A terrific comeback race from him. He's some horse."

Right: Third place finisher Win the Space in the paddock before the race. Jockey Mike Smith said, "What a fun race to ride in. Really cool. My horse ran good. When I could see we had third (place) locked up, I just started watching those two up front. I wanted to see who would win it. Heckuva race." 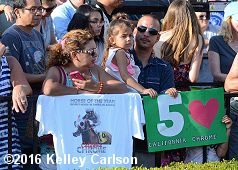 Some of California Chrome's fans by the paddock. The 2014 Horse of the Year and Champion 3-Year-Old extended his current win streak to 4. His record improved to 13 wins, 3 seconds, and 1 third in 22 starts, earning $12,652,650. The jockey silks and the saddle towel used in the race were auctioned before the Del Mar Paddock Sale on Saturday evening. Mark Stanton, a fan from New Jersey in town for a handicapping tournament, was the winning bidder at $20,000. The proceeds went to the V Foundation for Cancer Research, a charity which also receives a portion of California Chrome's earnings. Stanton said, "I love this place. I'll frame this and put it over my bed."


The $200,000 San Clemente Handicap (G2) featured a field of 10 three-year-old fillies going 1 mile on the Jimmy Durante Turf Course. Senorita (G3) and Honeymoon (G2) runner-up Be Mine was the 5-2 favorite over 3-1 Stays in Vegas, third in the Honeymoon (G3) after winning the Senorita, and 7-2 Belvoir Bay, winner of the Blue Norther in December. 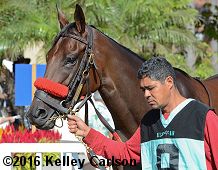 Left: Mokat in the winner's circle. Winning trainer Richard Baltas said, "I thought she might be a little bit short. We gave her a rest after the Kentucky Oaks aiming for this race and she breezed very well on the turf here (July 12). She's just a different horse on the turf. I said ëI hope we have her fit enough' and she was. The Del Mar Oaks is next."

Right: Mokat in the paddock. Winning jockey Kent Desormeaux said, "She was full of run. Richie said the one thing he wanted me to do was to get her to relax. Down the backside, she was as cool as the cucumber. Then the speed backed up into us and I peeled her out. She did it all on her own. She was good. How good is she? (Baltas) thought enough of her to run her against Songbird. That tells you something about (Mokat). And what does this race tell you about Songbird?" 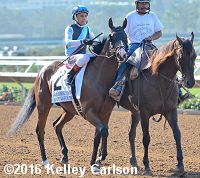 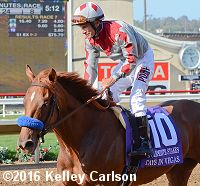 Left: Second place finisher Lady Valeur in the post parade. Jockey Rafael Bejarano said, "She was lugging out on me early. But I stayed on the rail and tried to save her. I got a good run; no excuses. The winner was just much the best."

Right: Third place finisher Stays in Vegas returns after the race. Jockey Alex Solis said, "My trip was OK. She gave me some punch at the end. The mile and an eighth of the Oaks ñ I think she might be tough there." 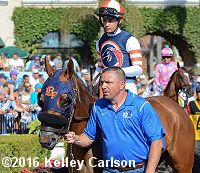 Fourth place finisher and beaten favorite Be Mine in the paddock before the race. The Phil D'Amato trainee has a record of 2 wins, 2 seconds, and 0 thirds in 5 starts, earning $98,410 for owners Agave Racing Stable and Little Red Feather Racing.