The $500,000 Suburban Handicap (G2) features the top older handicap horses of the east going 1 1/4 miles on the Belmont Park main track, in an early prep for the Whitney Handicap (G1) and ultimately the Breeders' Cup Classic (G1). Santa Anita Handicap (G1) and Pimlico Special (G3) winner Shaman Ghost was sent off as the 1-2 favorite in the field of 5. In to challenge him included 3-1 second chice Matt King Coal, winner of the Mountain View at Penn National after finishing 2nd in the Charles Town Classic (G2), and 5-1 third choice Keen Ice, 7th in the Dubai World Cup (G1) and winless since the 2015 Travers. 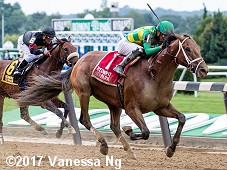 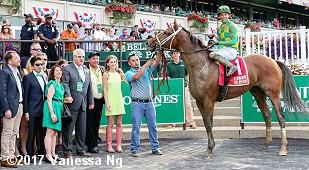 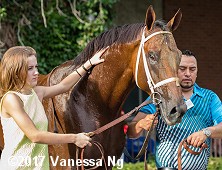 Left: Keen Ice in the winner's circle. Winning trainer Todd Pletcher said, "That was a great effort, he really ran a huge race. Coming into it, we were a bit concerned with the lack of pace on paper. We thought he might have to be a little bit more forwardly placed and Jose gave him a great ride in able to position him towards to the rail. The fractions weren't fast up front, but Jose had him in a perfect position and when he was able to swing out you really saw him extend to the wire."

Right: Keen Ice heads back to the barn after the race. Winning jockey Jose Ortiz said, "I know that Shaman Ghost is a really good horse but how the race developed, my horse pulled me really close to him. I thought I was going to be a little farther behind. When we hit the 3/8 pole, I was right next to (Shaman Ghost), on his heels, without asking, so I was in a very good position. Keen Ice gave me everything he had. He was full of run today." 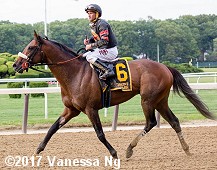 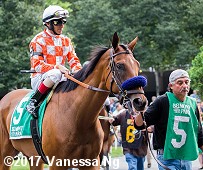 Left: Second place finisher and beaten favorite Shaman Ghost returns after the race. Jockey Javier Castellano said, "Unfortunately, we didn't have the pace in the race. He's a horse that likes to have a target in the race and something to focus on, but the pace was so slow today. When he turned for home, he ended up in the lead and I think it kind of weighed a little bit. But (Keen Ice) is a nice horse. You never know what's going to show up with Keen Ice, he's been training so good. I give all of the credit to him today, and being second best to him today."

Right: Third place finisher Follow Me Crev heads out of the paddock before the race. The Vladimir Cerin trainee improved his record to 6 wins, 5 seconds, and 5 thirds in 23 starts, earning $552,240 for owners David and Holly Wilson.

Kicking off the stakes quintet on Saturday, the $400,000 Dwyer Stakes (G3) featured a field of 5 three-year-olds going 1 mile around one turn of the main track. Practical Joke was sent off as the 3-4 favorite, unraced since finishing 5th in the Kentucky Derby (G1). In to challenge him included 7-5 second choice Battalion Runner, unraced since 2nd in the Wood Memorial (G1), and 6-1 third choice Giuseppe the Great, second in the Woody Stephens (G2).

Jockey John Velazquez sent Battalion Runner to the front through fractions of 23.12, 47.15, and 1:11.55 while pressed by 20-1 True Timber and stalked by Giuseppe the Great. Battalion Runner continued to lead through 7f in 1:23.74, but Practical Joke, 4th early, rallied past him inside the 1.8 pole to win by 2 lengths over late-running 43-1 longest shot Tale of Silence in 1:35.16. It was a neck back to Battalion Runner third. 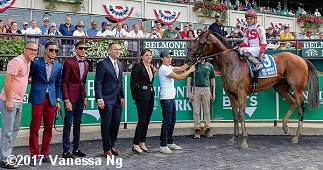 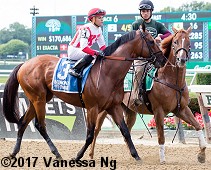 Left: Practical Joke in the winner's circle. Winning trainer Chad Brown said, "The pace wasn't that strong. On top of that, the horse was giving six to eight pounds to every horse in the race. He really ran well today. I certainly think it's the best race he's ever won."

Right: Practical Joke in the post parade. Winning jockey Joel Rosario said, "I had a good trip. There weren't a lot of horses in the race, so I stayed inside for a bit. I looked like (Battalion Runner) was probably going to go, so I just kept an eye on him. (Practical Joke) ran a big race today. He was the best horse in the race. He looked good and finished really strongly. That's what we were hoping for." 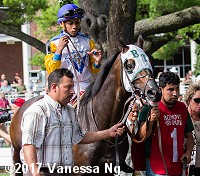 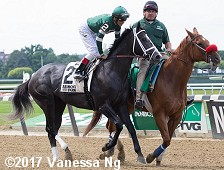 Left: Second place finisher Tale of Silence in the paddock before the race. The Barclay Tagg trainee improved his record to 2 wins, 2 seconds, and 0 thirds in 10 starts, earning $188,272 for owner-breeder Charles Fipke.