The co-feature on on Whitney day at Saratoga was the $500,000 Longines Test Stakes (G1) for 3-year-old fillies sprinting 7 furlongs on the main track. Summertime Oaks (G2) winner Faypien was sent off as the 2-1 favorite in the field of 10. In to challenge her included 9-4 second choice American Gal, winner of the Victory Ride (G3), and 9-2 third choice Your Love, winner of her first 2 starts and making her stakes debut here. 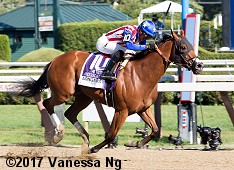 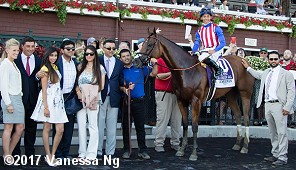 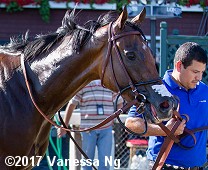 Left: American Gal in the winner's circle. Winning trainer Simon Callaghan said, "We knew she was sitting on a big performance. She came into this race so good after her last race, and for once the race went perfectly to plan. She got a great trip and she dominated today. I think cutting her back to 7/8 is her optimal distance. We'll take her back to California and think about the Breeders' Cup and which way to go about but we'll just enjoy today. I have to think 7/8 is such a good distance for her. A mile, she she's still very good, but at the back of my mind 7/8 is where she's going to be spectacular."

Right: American Gal heads back to the barn. Winning jockey Jose Ortiz said, "She finished very well. I just wanted to get a clean break and I got it. We found some room very well. She was impressive for me today." 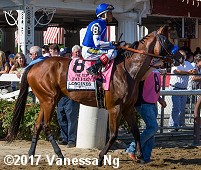 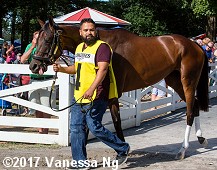 Left: Second place finisher and beaten favorite Faypien heads out to the track before the race. Jockey Rafael Bejarano said, "The trip was good. I had a good, clean break from the gate. I was really comfortable with the break. The winner today was much the best. She's been performing really well so far. She's been training good. It's just a different track today. There was a lot of pressure from the outside. I had to keep going to keep my position. She tried every step in the race. She gave everything." 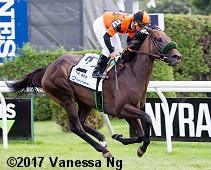 Kicking off the stakes quintet on Saturday, the $200,000 Fasig-Tipton Waya Stakes (G3) featured 7 older fillies and mares going 1 1/2 miles around 3 turns of the inner turf course. Dance Smartly (G2) 4th place finisher Suffused was sent off as the 9-10 favorite over 3-1 Apple Betty, winner of the River Memories, and 6-1 Lottie, 3rd in the River Memories.

Jockey John Velazquez sent Apple Betty to the lead first time by through fractions of 24.36, 49.60, 1:14.34, 1:38.41 and 2:02.24 while pressed by Suffused and stalked by 10-1 Summersault. Entering the stretch, jockey Javier Castellano moved 9-1 Estrechada, 4th early, to the outside for room and she gained the lead at the 1/8 pole, holding off late-running Lottie by 1/2 a length in 2:27.49 over the firm going. It was a neck back to Summersault third, while favorite Suffused checked in 5th.
Results chart 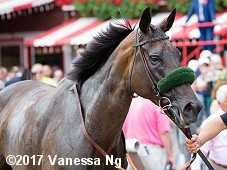 Left: Estrechada in the winner's circle. Ral Ayers, assistant to winning trainer Mike Puype said, "Javier did a great job. She got a great trip. Last time, Flavien [Prat] was in tight, just couldn't get out, and when she gets out he just runs past them, but the race was over."

Right: Estrechada heads back to the barn after the race. Winning jockey Javier Castellano said, "Everything went well. I had a great position in the race with the way it unfolded. It's a mile and a half race and the way she did it, I was impressed. She can run all day. I'm just thankful to ride that kind of horse." 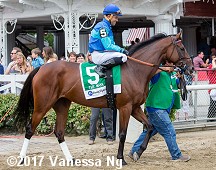 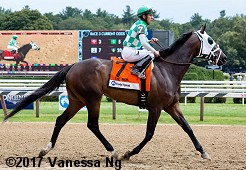 Left: Second place finisher Lotte heads out to the track before the race. Trainer Graham Motion said, "I was really pleased. I told Joel (Rosario) that at the top of the stretch I was worried she wouldn't get a piece of it. She really grinds it out. This filly wants to go 1 1/2 or further, so I think we have found her niche. And look, to be competitive in this race today that speaks a lot." 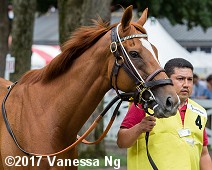 Fifth place finisher and beaten favorite Suffused in the paddock before the race. Trainer Bill Mott said, "She's just not the same as she was earlier in the year." Jockey Jose Ortiz added, "I had a perfect trip. I just don't think she's running the same as she did last year." 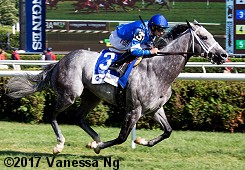 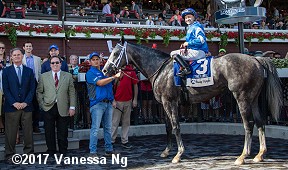 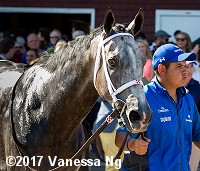 Left: Zennor in the winner's circle. Winning trainer Kiaran McLaughlin said, "We got a little unlucky in his last start, he got left at the gate and settled towards the back and won. Then today, Joe didn't think there was too much pace so he laid second and got the jump on everybody. He fits this horse very well and he deserves a lot of credit. I'm glad it worked out well. It's great to win here at Saratoga. It was a tough race, we're happy. Today, he laid second and came on. I give Joe a lot of credit, he brings it out in this horse. That's what he said before the race, that there wasn't a lot of pace so he might be a little closer. Whatever he did today, he did right. It was the correct race. On paper, this was a Grade 2. We don't know how good he is. We'll maybe step up to a proper graded stakes next time, even though this was like a graded stakes."

Right: Zennor heads back to the barn after the race. Winning jockey Joe Bravo said, "I just tried to stay out of this big gray horse's way. Anything I ask him to do, he does it with ease. The most impressive thing about the race is that he came back like he did nothing. He kicked off at the top of the lane, he kicked all the way throughout it, but I still had horse underneath me. As he gets better his confidence is getting better too. He really was push-button, putting me wherever I wanted to be. All I can say is Kiaran did all the work, he just made me look good out there." 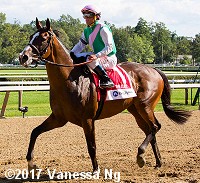 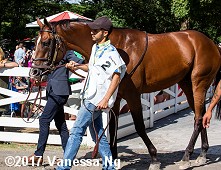 Left: Second place finisher and beaten favorite Projected returns after the race. Jockey Javier Castellano said, "I tried to break and be right there, but I didn't have a lot of speed. (Macagone) was rolling and I don't have that kind of speed to be right there you know. I tried to break running and get in a good spot, but it was very fast so I had to run in front another way. He gave me a little room at the end but they were pretty good horses."

Right: Third place finisher Takeover Target in the paddock before the race. Trainer Chad Brown said, "Takeover Target ran well off the layoff. I thought he had every chance to win, but he didn't get there."

Also on the card: The Whitney and De La Rose Stakes