The $1.2 million Whitney Stakes (G1), run at 1 1/8 miles over the main track, is the premier contest at Saratoga for older horses and is a Breeders' Cup Challenge "Win and You're In" race earning the winner automatic entry into the Classic (G1). 39,289 fans were on hand under sunny skies and temperatures in the high 70s. Stephen Foster Handicap (G1) winner and Dubai World Cup 2nd place finisher Gun Runner was sent off as the 3-5 favorite in the field of 7. In to challenge him included 7-2 second choice Keen Ice, winner of the Suburban (G2), and 7-1 third choice War Story, winner of the Brooklyn (G2).

Gun Runner wound up with one of Cautious Giant's shoes caught in the end of his tail and you can see it in the finish shot below. 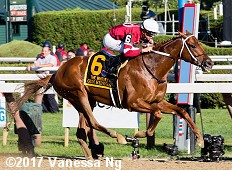 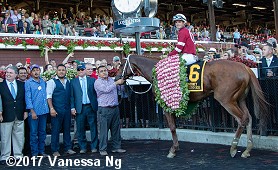 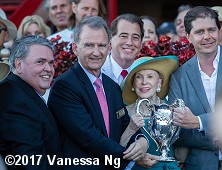 Left: Gun Runner in the winner's circle. Winning trainer Steve Asmussen said, "He got away cleanly, he handled nicely, he didn't let that horse disrupt the rhythm he was in. Florent showed a lot of confidence in him to take the lead when he did. There's a lot of pressure under those circumstances when there's a horse entered for pace for him. When he let him drop off into the second turn there, he showed a lot of confidence in the horse. As you saw how he went by the wire, Florent knows him really well. For him to win a race of quality of the Whitney at Saratoga under the pressure that Saratoga brings only elevates his status." 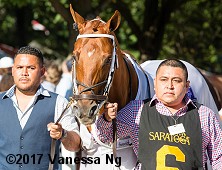 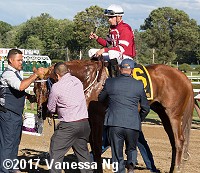 Left: Gun Runner in the paddock before the race. Geroux added, "Look at what happened with Arrogate. He was 1-9 and he got beat. It could have happened to us. Always Dreaming came back; same thing last week, and he didn't run good. Same thing for Cloud Computing. You need to run the races. It's not because you are a favorite that you are going to win."

Right: Gun Runner after the race. You can see the horseshoe stuck in his tail still. Asmussen added, "(Arrogate) beat us both times. Hopefully, the stars will align and we'll have another opportunity at the end of the year. I got on the plane leaving Dubai thinking that way. He beat us 15 lengths in the Travers and 2 1/2 in Dubai. I felt like it's headed the right direction. He needs to finish off this year (to be considered great). Nothing but respect for Arrogate. I witnessed the Travers here last year in person and to see a horse finish up like that at 1 1/4 miles is as rare as ever. Gun Runner gives us the confidence. We're up to the challenge and if he can finish off the year, it'll be deserving." Click here for a close-up of the shoe in his tail. 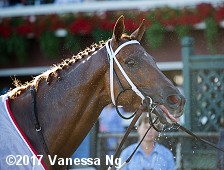 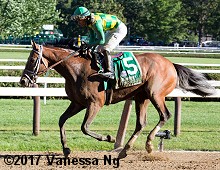 Left: Gun Runner gets hosed off after the race. Winning jockey Florent Geroux said, "My horse broke super sharp today from the gate. I could have gone to the lead if I wanted to, but I just stayed cover until the 5/8 pole and from there the race was pretty much over. My horse was just on cruise control from all the way from there and then I just gave him a tap around the 1/8 pole to make sure he stayed focused but there was not even a need for that." 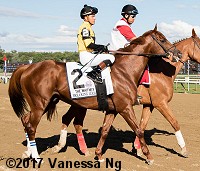 Left: Third place finisher Breaking Lucky heads out for the post parade. Trainer Reade Baker said, "He broke perfect, ran perfect, just ran into a very tough race. We tried to win it. If he rode to be second , he would've been second. We showed up. We have enough money to get back home, and we'll start over."

Right: The horses break from the gate for the Whitney. Luis Contreras aboard Breaking Lucky (post 2) said, "It worked out kind of perfect when (Cautious Giant, post 3) pulled away. I tried to win the race and we were getting close, but then Gun Runner just took off like crazy. It's too bad that I got beat for second too, but he ran a big race and I am really happy with him." 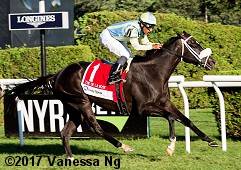 Closing out Saturday's card of racing, the $100,000 Fasig-Tipton De La Rose Stakes featured a field of 8 older fillies and mares going 1 mile on the inner turf course. Perfect Sting Stakes winner On Leave was sent off as the 9-10 favorite oer 3-1 Elysea's World, 5th in the Dr. James Penney Memorial, and 11-2 Bar of Gold, 7th in the Ogden Phipps (G1).

Jockey Kendrick Carmouche sent 28-1 Proper Discretion to the lead through fractions of 24.37, 48.07, and 1:11.51 while pressed by 12-1 Sky My Sky and stalked by On Leave and 13-1 Thundering Sky. Turning for home Proper Discretion tired badly allowing Sky My Sky to inherit the lead midstretch. However, Thundering Sky came through between horses late to outfinish On Leave by a neck for the win in 1:35.42 over the firm going. It was another 1/2 length back to Bar of Gold third.
Results Chart 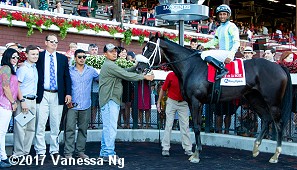 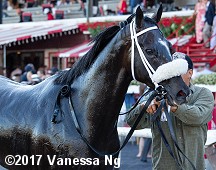 Left: Thundering Sky in the winner's circle. Winning trainer George Weaver said, "She ran a big race. We have seen her press and put her on the lead a few times and we were adamant that we were not going to do that. Some of the horses that scratched were going to show speed anyway, so the speed in front of us was going to help. But there were still a couple [of speed horses] in there, so we were able to stalk and pounce on them and it worked out."

Right: Thundering Sky heads back to the barn after the race. Winning jockey Rajiv Maragh said, "I just wanted to be patient with her because I thought that she would have one strong run at the end. When I asked her in the stretch she really gave it a good kick. It was my first time riding her and they said she had a tendency to [carry the rider high], and today I tried to keep her focused. I think she was loafing a little bit, but now that I have a feel for her, I think I can do even better next time." 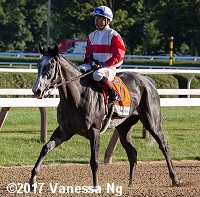 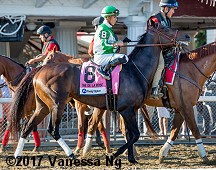 Left: Second place finisher and beaten favorite On Leave returns after the race. Jockey Jose Ortiz said, "It was good, she was very alert. I rode her the best that I could I put her right in the clear, I didn't want to get in any trouble. I let her go by the quarter-pole, and she responded well, but then she just got beat. I never make it too complicated with her. I just put her on the lead if there is not speed in there. If there is speed I will see it. She can do it all, so I just let her [decide] on her own."

Right: Third place finisher Bar of Gold heads out to the track before the race. The John Kimmel trainee improved her record to 5 wins, 5 seconds, and 4 thirds in 21 starts, earning $828,500 for owner-breeder Chester and Mary Broman.

Also on the card: The Test, Waya Stakes, and Lure Stakes