The feature race on Championship Friday is the $2 million Longines Breeders' Cup Distaff (G1) (run for part of its history as the Ladies Classic), contested at 1 1/8 miles over the main track and usually decides Champion Older Female and Champion 3-Year-Old Filly. Elate was sent off as the 2-1 choice in the field of 8 off her wins in the Alabama (G1) at Saratoga and the Beldame (G1) at Belmont. In to challenge her included 3-1 second choice Stellar Wind, winner of the Apple Blossom (G1), Beholder Mile (G1), and Clement Hirsch (G1), and 7-2 third choice Forever Unbridled, winner of the Fleur de Lis (G2) and Personal Ensign (G1).

Mario Gutierrez aboard 23-1 Champagne Room set the pace of 23.79, 48.08, and 1:12.50 while pressed by 5-1 Paradise Woods and stalked by Stellar Wind. Into the lane jockey John Velazquez sent Forever Unbridled, 3 wide in 6th early, to the lead. Kept to task by Velazquez, Forever Unbridled held off late-running 5-1 fourth choice Abel Tasman by 1/2 a length in 1:50.25 over the fast main track. It was a long 3 length back to Paradise Woods third, and another length back to favorite Elate fourth. 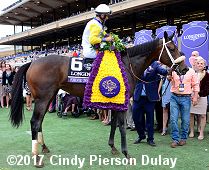 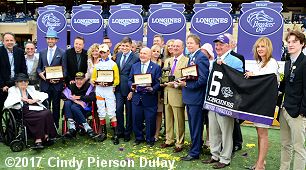 Left: Forever Unbridled in the winner's circle. Winning jockey John Velazquez said, "The whole key was I wanted to save ground on the first turn and I was able to do that. I got her in a comfortable position where I thought she was going well. At the 3/8 pole I followed (Elate) and all of a sudden she stopped and I had to go a little sooner than I wanted to. I got to the lead a little too soon for me but, I mean, it was perfect."

Right: Trophy presentation for the Distaff. Winning owner-breeder Charles Fipke said, "We're definitely going to be considering (the Pegasus World Cup at Gulfstream). That would be the goal. But we'll look at all the buyers and who is also in the race. Now she's won the Distaff. I don't know how she'll stack up against the colts." 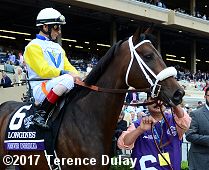 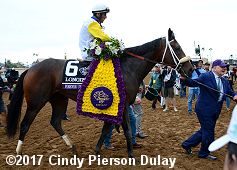 Left: Forever Unbridled heads out for the post parade. Winning trainer Dallas Stewart said, "I'm just blessed. She's such a great filly. A championship was on the line and she's three-for-three. She ran great and I'm proud of Johnny and how he rode her. Joel (Rosario, original jockey) is a great rider and those are two great jockeys, but I'm focused on the horse. She's had that spacing and she's been very successful with that."

Right: Forever Unbridled on her way to the winner's circle. Stewart added, "Last year she had an injury and we gave her plenty of time. Chuck (Fipke) was right about putting her back in training. He didn't have to. He could have just retired her already a Grade 1 winner. He opted to bring her back and the injury wasn't bad and she was never sore. We brought her back and put her back in training and she's so good when you space those races out. She's the best I've trained." 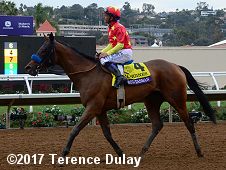 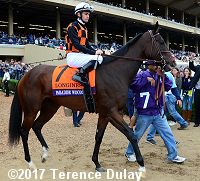 Left: Second place finisher Abel Tasman returns after the race. Trainer Bob Baffert said, "Down the backside I was a little bit worried, but down the stretch she tried hard and she ran her race. We're so proud of our mare. She gave us the biggest thrill winning the Kentucky Oaks and she showed up again today but just came up a little bit short. It was a great performance by her going against older horses. She just got beat by a really good horse. That was a tough race. The Distaff was one of the toughest races on the (Breeders' Cup) card. She really ran her heart out and just came up a touch short. She ran her heart out but just came up second. She's a sweetheart like American Pharoah and maybe one day they'll breed her to American Pharoah."

Right: Third place finisher Paradise Woods heads out to the track before the race. Trainer Richard Mandella said, "She ran a very good race. I'm already getting excited thinking about having her back next year and watch her grow into racing. I have no complaints about the way the race was run. I'm very pleased with her very fine effort." Jockey Flavien Prat added, "I had a good trip. She relaxed nicely. I wasn't worried about that. She did everything right. Turning for home I thought I had a good shot. She ran a good third and she's only a 3-year-old." 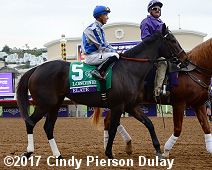 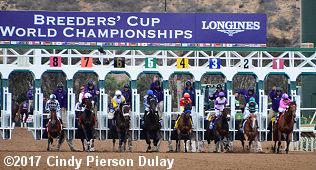 Left: Fourth place finisher and beaten favorite Elate in the post parade. Trainer Bill Mott said, "She was training great but she was a little dull today; a little flat. Maybe it's just late in the year and she ran like she is just getting a little tired."

Right: The field breaks from the gate for the Distaff. Jose Ortiz aboard fourth place finisher and beaten favorite Elate (post 5) said, "It was a good race for her. She broke well and we got a good position. She went well all the way around there. But when it came time in the stretch, it just wasn't there. She ran out of gas. But she's only a 3-year-old and she'll come back next year and be even better."