The $4 million Longines Breeders' Cup Turf (G1) is the longest race of the World Championships, for older horses going 1 1/2 miles over the Del Mar course. Defending champion and Prince of Wales's (G1) winner Highland Reel was the 7-5 favorite off a 3rd place finish in the QIPCO Champion Stakes (G1). In to challenge him included 7-2 Beach Patrol, winner of the Arlington Million (G1) and Joe Hirsch Turf Classic (G1), and 11-1 Decorated Knight, winner of the Tattersalls Gold Cup (G1) and Irish Champion Stakes (G1). 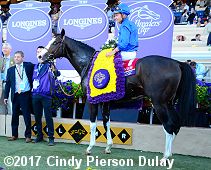 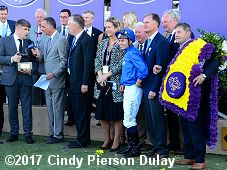 Left: Talismanic in the winner's circle. Winning jockey Mickael Barzalona said, "Right I can't believe it. I am thrilled to have won my first Breeders' Cup race. I expected the horse to run well, but I'm not sure I thought I would win. Mr. Fabre is a great trainer."

Right: The trophy presentation for the Turf. 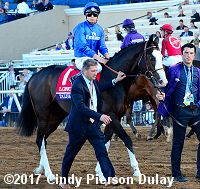 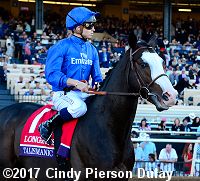 Left: Talismanic in the post parade. Joe Osborne, chief executive of owner Godolphin said, "He's by Medaglia d'Oro so you have to figure he'd do well over here so that certainly was a factor. But I know Andre has always regarded this horses quite highly so I hink we're certainly more concerned about fast ground. You could see today he loved it."

Right: Talismanic exits the tunnel before the race. He was my pick all week for prettiest horse and not just for his coloring, but he always acted like he was ready to kick butt. 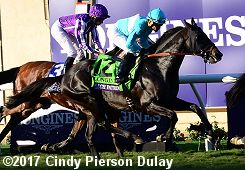 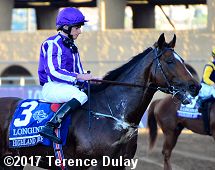 Left: Second place finisher Beach Patrol races in second first time by. Jockey Joel Rosario said, "Broke perfect. Beautiful. I followed the speed and saw (Highland Reel) to my inside, so I held my position. Turning for home, he took off, but (Talismanic) was far out from me, so my horse couldn't see him and my horse is a fighter. He ran well. The fractions were fast but he likes to run like that. It was a good run. It's just too bad one horse beat us right at the end."

Right: Third place finisher and beaten favorite Highland Reel returns after the race. Jockey Ryan Moore said, "He seemed to be laboring today. He didn't have that usual oomph. They went quick and he rolled a bit down the straight."

First time down the stretch in the Turf with Oscar Performance leading followed by Beach Patrol and Highland Reel. Notice the birds flying in the bottom right.