The $1,000,000 Longines Kentucky Oaks (G1) at 1 1/8 miles is the premier race in the country for 3-year-old fillies, and is the female counterpart to the Kentucky Derby. A full field of 14 faced the starter in the 142nd renewal of this 1 1/8 mile main track feature at Churchill Downs, run on Friday before 124,589 fans, the highest Oaks attendance in history. Conditions were excellent on Friday, with sunny skies and temperatures near 70. Rachel's Valentina was sent off as the 5-2 favorite despite finishing second in her last 2 starts, the Breeders' Cup Juvenile Fillies (G1) and the Ashland Stakes (G1) both at Keeneland. In to challenge her included 9-2 second choice Cathryn Sophia, 3rd in the Ashland after winning the Davona Dale (G2) and Forward Gal (G2), and 5-1 third choice Lewis Bay, winner of the Gazelle (G2).

Jockey Ricardo Santana Jr. sent 23-1 Terra Promessa to the lead immediately and she set fractions of 23.32, 47.87, and 1:12.60 while pressed by Rachel's Valentina and stalked by Lewis Bay. On the far turn Terra Promessa tired as Cathryn Sophia, 4th early, swept 5 wide to the lead through 1 mile in 1:37.10. Kept to task by jockey Javier Castellano, Cathryn Sophia drew off to win by 2 3/4 lengths over late-running 6-1 Land over Sea in 1:50.53. It was a neck back to Lewis Bay third, while Rachel's Valentina tired late to finish 6th beaten 6 1/4 lengths.

There were five other stakes races on the card with the Oaks. Full results for all of them with more photos are here. 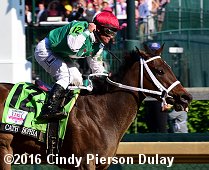 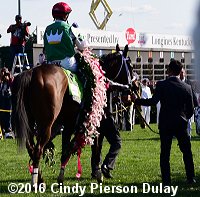 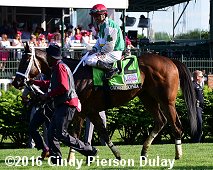 Left: Cathryn Sophia heads to the winner's circle. Winning trainer John Servis said, "Javier (Castellano) rode her great. I'm so happy. I saw (Castellano) had horse (coming into the stretch) and when he inched up three wide on the outside, I knew he had horse. Oh my God, to have the Derby and Oaks on my resume, and to have only run one each time, it's fantastic."

Right: Cathryn Sophia circles on the turf course after the race. Winning owner Chuck Zacney said, "I had the pleasure of being part of the ownership of Afleet Alex back in 2004, 2005. He won 2/3 of the Triple Crown. As far as fillies, this is very, very special for many reasons. I was looking for a Maryland-bred horse in 2014. Went to the Fasig-Tipton sale and picked her out. She wasn't a big filly, but she was athletic. And we got her for $30,000. What a bargain!" 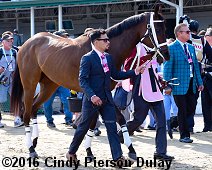 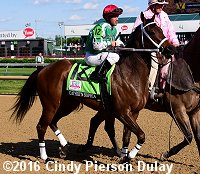 Left: Cathryn Sophia heads into the paddock before the race. The filly is named after owner Chuck Zacney's niece Cathryn Sophia McCarry, who was at her first horse race today. She said, "It's a thrill. It's a privilege, too, to be here, to be named after the horse that just won. It's an amazing feeling."

Right: Cathryn Sophia in the post parade. Winning Javier Castellano said, "She felt like she belonged with this group. What a filly! It feels great. Turning for home, the quarter pole where I felt she was still in the bridle, and she was still pulling. I think now is time to go. The way she did it turning for home, I think nobody can beat that filly today." 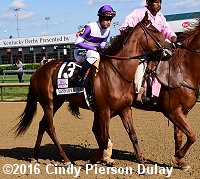 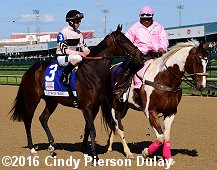 Left: Second place finisher Land Over Sea in the post parade. Trainer Doug O'Neill said, "She ran a great race for us. We are very proud of her. Mario (Gutierrez) said she got away from there a bit slow and he was farther back than he wanted to be. So, he saved all the ground he could and kept plugging. At one point there I thought she was going to be fifth or sixth, but she kept trying and Mario never gave up on her. We are delighted with her try."

Right: Third place finisher Lewis Bay in the post parade. Trainer Chad Brown said, "I thought my horse ran well. I thought she ran great. I'll talk to (jockey) Irad (Ortiz Jr.). She got a good trip saving ground. She just got nailed for second. The winner was clearly best today." Jockey Irad Ortiz Jr. added, "She surprised me. She was very keen. She was on her game today. She was pretty close, I didn't think she'd be that close. But, that's racing. She broke aggressive. She relaxed nicely. I had to move a little early for her style. Maybe could have run second, but she still ran a beautiful race. Chad did a great job with her. She's a nice filly." 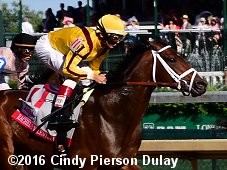 Left: Beaten favorite and sixth place finisher Rachel's Valentina shortly after the start. Jockey John Velazquez said, "We were in a good spot; she was cruisin' for me early. Then when we hit the three-eighths (pole), she started jumping up and down. She just didn't have it." Trainer Todd Pletcher added, "Johnny said she started slipping away from him at about the three-eighths pole. She was in the spot we envisioned for her in the early part of the race, then it just wasn't there at the end."

Right: The entire field shortly after the start. Jockey Ricardo Santana Jr. aboard pacesetter Terra Promessa (on rail, post 1) said, "She was really sharp today. She broke really sharp. I sat her down and she relaxed a little bit. She doesn't run like that (on the lead). It was pretty hard on her. No one broke with her."