Kentucky Oaks Day on Friday usually draws the second largest attendance of any raceday in North America, second only to the Kentucky Derby run the very next day. Five graded were contested over the fast main track and firm turf course on the Oaks undercard. Conditions were excellent with sunny skies and temperatures near 70, with an Oaks day record 124,589 fans in attendance.

Get the Oaks results and photos here.

The first Grade 1 stakes of the Churchill Downs meeting is the $300,000 La Troienne Stakes (G1) for older fillies and mares going 1 1/16 miles on the main track. Madison Stakes (G1) winner Sheer Drama was sent off as the 9-10 favorite in the field of 6 over 2-1 Curalina, unraced since third in the last year's Breeders' Cup Distaff (G1), and 5-1 Penwith, winner of the Royal Delta (G2) but 4th in the Santa Margarita (G1).

Jockey Javier Castellano sent 10-1 Angela Renee to the lead and she set fractions of 24.24, 48.38, and 1:12.36 while pressed by Curalina and stalked by Penwith. Turning for home Curalina came out 3 wide for room and easily swept to the front, opening up a 1 1/2 length lead on the tiring pacesetter through 1 mile in 1:36.44. Kept to task by jockey John Velazquez she drew off to win by 7 1/2 lengths over late-running 20-1 longest shot Engaginglee in 1:42.45. It was a head back to favorite Sheer Drama third. 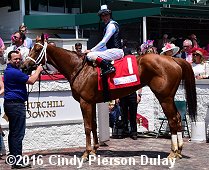 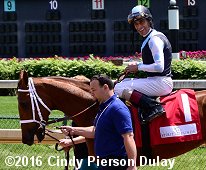 Left: Curalina in the winner's circle. Trainer Todd Pletcher said, "We didn't think (Angela Renee) would be on the lead when we (he and John Velazquez) spoke beforehand, but Johnny did a good job of getting in perfect position with her. He rode a very good race. We felt like we had her ready (off a 6 month layoff)."

Right: Curalina heads to the winner's circle. Winning jockey John Velazquez said, "She came back really good. Once I got my position, I made sure to stay there. I wanted to keep Sheer Drama in the tight spot. When we came into the lane, my horse just took off. There was no competition coming after her. She won easy." 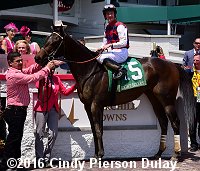 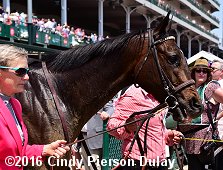 Left: Carina Mia in the winner's circle. Winning trainer Bill Mott said, "It looked like if we had a clean break we had as much speed as anybody. Then she just maybe hesitated. You can't hesitate very long and you get four or five outbreaking you. She got a good education out of it today. She was in between and behind and (Julien Leparoux) actually had to steady a little bit heading into the turn. When he tipped her out, she has a gear now. I guess the Acorn would be the next thing on the docket for her."

Right: Carina Mia returns to the barn. Winning jockey Julien Leparoux said, "She broke slowly, actually. First time that happened. She was relaxed and came running at the end. She showed a new style, but it worked out good. She was very comfortable and relaxed. (Put Da Blame on Me) came out a little bit (at the start), but not enough to bother me too much. She just really didn't break that fast today."

The $150,000 Twin Spires Turf Sprint (G3) featured a field of 12 older horses sprinting 5 furlongs on the Matt Winn Turf Course. 2014 Breeders' Cup Juvenile Turf (G1) winner Hootenanny was the 7-2 favorite over last year's winner 4-1 Power Alert and 5-1 Guns Loaded, winner of the San Simeon (G3). Jockey Flavien Prat sent 9-1 Rocket Heat to a clear lead through fractions of 21.74 and 44.40 while stalked by 37-1 Latent Revenge and 13-2 Something Extra. Entering the lane, Rocket Heat opened up by 3 lengths, and easily held off late-running Alsvid to win by 2 lengths in 56.47. It was another 1 1/2 lengths back to Power Alert third, while favorite Hootenanny checked in 8th.
Results chart from DRF 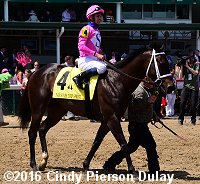 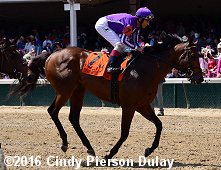 Left: Rocket Heat heads to the winner's circle. Winning trainer Vann Belvoir said, "He ran a huge one. When we broke out of the gate good and was able to clear, I was real excited about that. He was displacing so I did a myectomy on him and we were hoping it would help and I was confident that it would and we worked him twice in between races and he worked real well and more so worked him to give him his confidence that he was able to breathe and he has been training a lot more relaxed and not as scared going to the track so I thought it helped him quite a bit. 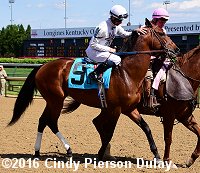 Left: Majestic Harbor in the winner's circle. Winning trainer Paul McGee said, "He had a good look all the way around there. Corey worked out the trip that he talked about working out which doesn't always happen but he just ran a game race and Corey's done a great job with him. He's a classy horse, he's a millionaire and he showed his class today. He's been a very sound horse all along, he really has."

Right: Majestic Harbor in the post parade. Winning jockey Corey Lanerie said, "The race was super and set up just like I had hoped. I thought I would be in front or sitting just on the outside stalking. Going down the backside, I loved my position. When I raised my stick to see if I had anything, you can feel him sitting me down in the saddle. The horse on the inside gave me engaged me for a little bit and I got little concerned but once I shook him loose he was gone. I was looking for Eagle to come but he didn't catch me today." 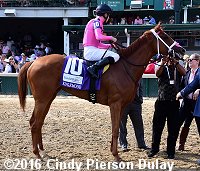 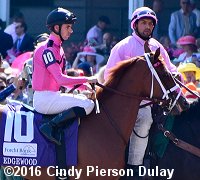 Left: Catch a Glimpse heads to the winner's circle. Winning jockey Florent Geroux said, "This is a very special, special filly. People were doubtful of her coming into this race because she didn't win her last one very impressively. But, I was always confident in her. She always puts me in a great spot and that's the key to winning races."

Right: Catch a Glimpse in the post parade. Winning trainer Mark Casse said, "She's been a challenge, but I think that's one of the things that makes her so great. I've been forutnate enough to train a couple really good fillies that were ornery. But today she was really good. Flo said she was a different horse from when she ran at Keeneland. Obviously the big goal would be the Belmont Oaks, it's a mile and a quarter."

Get the Oaks results and photos here.