The feature race on Saturday at Del Mar was the $300,000 TVG San Diego Handicap (G2) for older horses at 1 1/16 miles on the main track. Conditions were excellent at the seaside oval for the 21,336 fans in attendance, with sunny skies and temperatures in the low 70's. As expected, current Longines World's Best Racehorse Arrogate was sent off as the 1-20 favorite in the field of 5, coming here off a 7 race win streak including the Travers (G1), Breeders' Cup Classic (G1), Pegasus World Cup (G1), and the Dubai World Cup (G1). In to challenge him included 15-2 second choice Accelerate and 18-1 Cat Burglar.

Jockey Victor Espinoza sent Accelerate to a clear lead first time by and he set fractions of 23.49, 47.06, and 1:11.39 while pressed by25-1 Donworth and stalked by 18-1 Cat Burglar, as Mike Smith kept Arrogate at the back of the field 5 lengths off the pace. On the far turn, Smith asked Arrogate to move up but the favorite failed to mount a rally. Accelerate opened up a 7 length lead on Donworth midstretch through 1 mile in 1:35.78, and cruised to an 8 1/2 length win in 1:42.15 over the fast main track. It was another 2 1/2 lengths back to Cat Burglar third, and 4 1/2 more to Arrogate fourth. 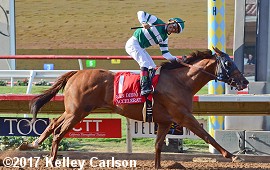 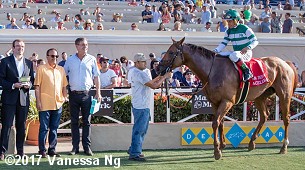 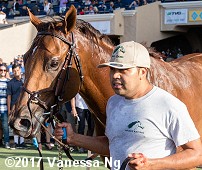 Left: Accelerate in the winner's circle. Winning trainer John Sadler said, "He liked this track last year; you know he won two here last year. He trained really well Sunday up at Santa Anita and showed a lot of pop when Victor worked him from the gate and they kept telling me it was $50,000 for second. You want to win, you don't want to concede anything, but I'm surprised we won because Arrogate is the best horse in the world. A couple of things went right for us and one of them was that Arrogate didn't fire his best. That's what has to happen for these big upsets."

Right: Accelerate heads back to the barn after the race. 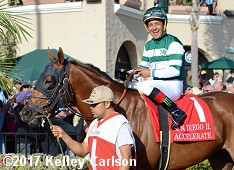 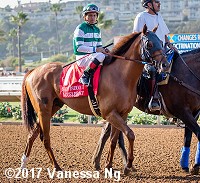 Left: Accelerate in the paddock before the race. Winning jockey Victor Espinoza said, "I was surprised by how far I won. I wasn't surprised that I did; I was here to win. I thought I'd sit second or third, but when that speed horse (El Huerfano) stumbled at the start, I made an easy lead. (Accelerate) got in a nice rhythm; he was going easy. He's a nice horse. This is the first time I rode him. I hope he can go on, so we can look at the Pacific Classic." 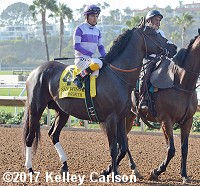 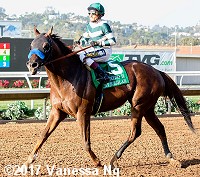 Right: Third place finisher Cat Burglar returns after the race. Jockey Rafael Bejarano said, "The loose horse (El Huerfano, who was running off with rider Evin Roman as he struggled to get back in his irons after his horse stumbled at the break) bothered me most of the way around there. I had to use my horse to stay away from him. (Cat Burglar) could have run better." Trainer Bob Baffert added, "(Cat Burglar) was flat, too. I thought he'd run better than that, but he just didn't want to go." 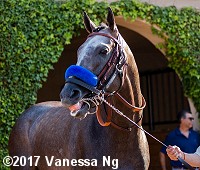 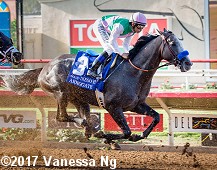 Fourth place finisher and beaten favorite Arrogate in the paddock (left) and first time by (right). Trainer Bob Baffert said, "I think he was just flat. I knew coming down here can be tough. Maybe I should have blown him out (down here). Mike said he was just flat and never in the race did he feel he had any horse. I think (Arrogate) just laid an egg. I don't think it had anything to do with the track. He was just flat." Jockey Mike Smith added, "I'm at a loss for words. We were going around there OK, and then I took him outside like I did in Dubai, but he just didn't pick it up. So I dropped him inside again and cut the corner, then wheeled him outside once more and tried to get something from him. But he was just flat. He wasn't trying. So I just wrapped up on him and got him home safe. We've got to go back and start over again. Get it back right."


Kicking off the stakes action on Saturday was the $250,000 Eddie Read Stakes (G2) for older horses going 1 1/8 miles over the Jimmy Durante Turf Course. Charlie Whittingham Stakes (G2) winner Ashleyluvssugar was sent off as the 7-10 favorite in the field of 7. In to challenge him included 3-1 second choice Hunt, 5th in the American Stakes (G3) last out, and 9-2 third choice Kenjisstorm, 6th in the American (G3).

Jockey Rafael Bejarano sent Kenjisstorm to a clear lead exiting the chute through fractions of 24.12, 48.16, and 1:11.56 while pressed by 19-1 Mr. Roary and stalked by Hunt. Turning for home Kenjisstorm tired allowing Mr. Roary to gain a short lead through 1 mile in 1:47.62. Jockey Flavien Prat sent Hunt through between horses at the 1/8 pole and outfinished favorite Ashleyluvssugar to win by a length in 1:47.62 over the firm course. It was another 1/2 length back to Mr. Roary third. 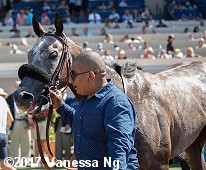 Left: Hunt in the winner's circle. Winning trainer Phil D'Amato, who also won last year's Eddie Read with Midnight Storm, said, "All along this was our plan, to use the American as a prep race for this. He got in a little trouble in that race, through no one's fault and I think the mile and an eighth and adding blinkers helped this horse's focus. We'll put our heads together and decide on whether to run him back in the Del Mar Mile or stretch him out in the Del Mar Handicap. One of the two."

Right: Hunt heads back to the barn after the race. 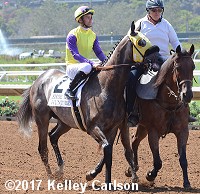 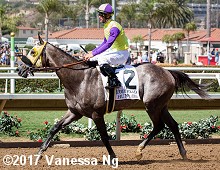 Left: Hunt in the post parade. Winning jockey Flavien Prat said, "I don't know if this was my best ride today. He had been training so well and I know how he can finish. I thought he'd run well here. I moved up inside and thought they'd leave a hole for me. But it wasn't happening there for a bit. I had to wait, but when we saw it (the hole) he was there. He finished strong."

Right: Hunt returns after the race. 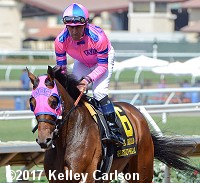 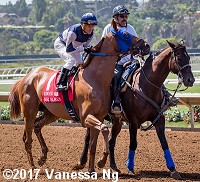 Left: Second place finisher and beaten favorite Ashleyluvssugar returns after the race. Jockey Gary Stevens said, "The (lack of) distance might have had something to do with it, but I just think it was a little too long between dances. He ran well and I thought I had the winner (Hunt) boxed up, but he got out. I had Santiago (Gonzalez on third-place finisher Mr. Roary) measured, but the winner got loose."