The $500,000 Suburban Handicap (G2) features the top older handicap horses of the east going 1 1/4 miles on the Belmont Park main track, in an early prep for the Whitney Handicap (G1) and ultimately the Breeders' Cup Classic (G1). Dubai World Cup (G1) runner-up Mubtaahij was sent off as the 2-1 favorite in the field of 7, winless since last year's UAE Derby (G2). In to challenge him included 11-5 second choice and last year's winner Effinex, winner of the Oaklawn Handicap (G2) but 6th in the Stephen Foster (G1), and 3-1 third choice Shaman Ghost, last year's Queen's Plate winner and off his Brooklyn (G2) victory. 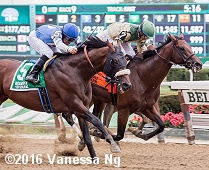 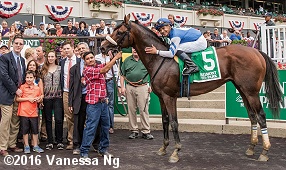 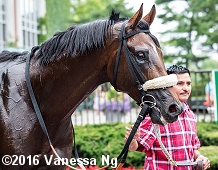 Left: Effinex in the winner's circle. Winning trainer Jimmy Jerkens said, "It looks like he can outgrind anybody out there, it looks like. We'll take it. I always loved this race. When I was a little kid, my father (late Hall of Famer Allen) won this race a bunch of times with Beau Purple. He used to love to run in it any chance he could. He was a New York guy and those New York handicap races always meant a lot to him, and to me too. It's great to win here."

Right: Effinex heads back to the barn after the race. Winning jockey Mike Smith said, "He ran wonderful. I got him away good. I got to the outside and got in comfortable, and in a rhythm.  He's funny sometimes. You have to work with him, but I've been so lucky to ride him at the right time. The post was right; everything always seems to be right. I just got blessed again." 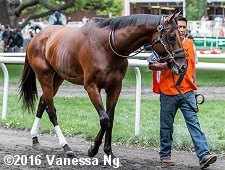 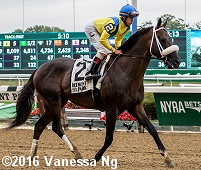 Left: Second place finisher Samraat in the paddock. Jockey Jose Ortiz said, "Everything went like we planned. He broke great and I sent him to the lead. We set very good fractions for the distance. Mike never let me go more than one or two lengths in front of him. He sat right there, half a length behind me, the whole way. When I asked him to go, he did. We sprinted home. I got beat by a nice horse. I'm glad to see Samraat back in form."

Right: Third place finisher and beaten favorite Mubtaahij in the post parade. The Kiaran McLaughlin trainee improved his record to 4 wins, 2 seconds, and 1 third in 13 starts, earning $3,647,332 for owner Essafinaat.

The $500,000 Dwyer Stakes (G3) featured a field of 8 three-year-olds going 1 mile around one turn of the main track. Easy Goer winner Economic Model was sent off as the 6-5 favorite over 3-1 Fish Trappe Road, second in the Woody Stephens (G2), and 5-1 Swipe, 2nd in last year's Breeders' Cup Juvenile (G1) but 3rd in an allowance last out. 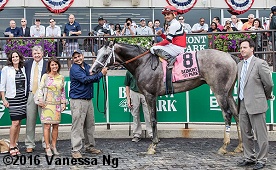 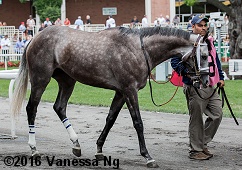 Left: Fish Trappe Road in the winner's circle. Winning trainer Bret Calhoun said, "He didn't have to be pushed. Luis rode him perfectly. I've been playing this race out in my head for a couple of days since it was drawn, and it played out exactly the way I thought it would. He's matured a lot. He was a big kid at 2, played 24-7 - now, it's all just coming together mentally and physically. I don't know if we're going to stretch him out in the Jim Dandy. We'll possibly look at the King's Bishop."

Right: Fish Trappe Road in the paddock. Winning jockey Luis Saez said, "Very nice trip. He broke good. He usually breaks very quick and fights you the whole time. But today, he was so relaxed. He was perfect and he finished strong." 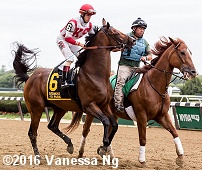 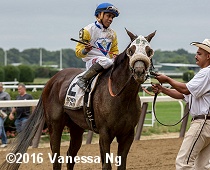 Left: Second place finisher and beaten favorite Economic Model acts up in the post parade. Trainer Chad Brown said, "My horse ran well. Irad said he wasn't comfortable inside there, I wish he could have got him out. Luis Saez rode a smart race and stayed in the clear. His horse ran really well. It's a good field. We were hemmed in the whole way. We'll regroup after this. We'll wait and see how he comes out of this."

Right: Third place finisher Tale of S'avall returns after the race. The Barclay Tagg trainee improved his record to 1 win, 1 second, and 1 third in 7 starts, earning $196,300 for owner-breeder Charles Fipke.


Kicking off the stakes action on Saturday, a field of 7 three-year-old fillies sprinted 6 1/2 furlongs in the $150,000 Victory Ride Stakes (G3). Coppa, undefeated in 2 starts so far in allowance company, was sent off as the 9-10 favorite over 4-1 Lost Raven, winner of the Miss Preakness (G3), and 5-1 Flatterywillgetyou, winner of the Bouwerie. 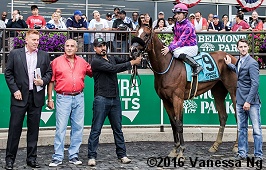 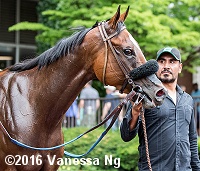 Left: Coppa in the winner's circle. Chris Davis, assistant to winning trainer Phil D'Amato said, "For being a lightly raced 3-year-old filly, she handled shipping cross-country unbelievably. She showed her class today in running on a new track. It's a lot to ask, and she exceeded all the expectations. She settled real nice for Joe today. When she got clear and the horses came running to her late, she dug in and galloped out way in front. She's still learning, but she's doing everything the right way. We couldn't be happier."

Right: Coppa heads back to the barn after the race. Winning jockey Joe Talamo said, "When she got in front of those other fillies I really had a ton of horse under me and I thought we were going to open up a little bit. She started out in a good way but when those two other fillies came through she really turned it on. I was confident she could rate just off the pace. I've been working her a lot in the morning and I definitely got to know her where she'll sit just off horses pretty nice. With that cozy nine-hole in a seven horse field it worked out perfect." 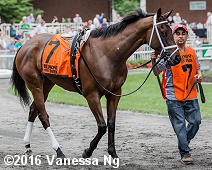 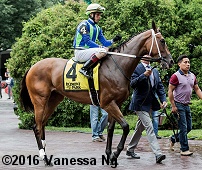 Left: Second place finisher Malibu Stacy in the paddock before the race. The George Weaver trainee improved her record to 1 win, 1 second, and 1 third in 7 starts, earning $92,987 for owners Jim and Susan Hill.

Right: Third place finisher One True Kiss heads out to the track. The Steve Asmussen trainee improved her record to 2 wins, 1 second, and 4 thirds in 12 starts, earning $176,940 for owners Kirk and Judy Robison.