The $1.25 million Whitney Stakes (G1), run at 1 1/8 miles over the main track, is the premier contest at Saratoga for older horses and is a Breeders' Cup Challenge "Win and You're In" race earning the winner automatic entry into the Classic (G1). 39,405 fans were on hand under sunny skies and temperatures in the high 80s. Metropolitan (G1) and Al Maktoum Challenge Round 2 (G3) winner Frosted was sent off as the 1-2 favorite in the field of 6. In to challenge him included 4-1 second choice Effinex, winner of the Oaklawn (G2) and Suburban (G2) handicaps, and 7-1 third choice Comfort, winner of the State Dinner Stakes.

Jockey Joel Rosario sent Frosted to the lead first time by ane he set fractions of 23.11, 46.42, and 1:09.65 while pressed by 9-1 fourth choice Noble Bird and stalked by 11-1 Upstart. On the far turn Frosted eased out to the 3 path for the drive, and quickly opened up a 3 length lead on the tiring Upstart through 1 mile in 1:34.52. Under a handride Frosted cruised to a 2 length win over late-running Comfort in 1:47.77 over the fast main track. It was 1/2 a length back to Upstart third. 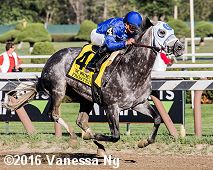 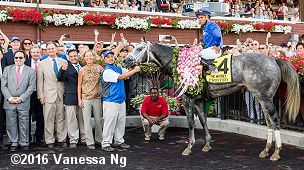 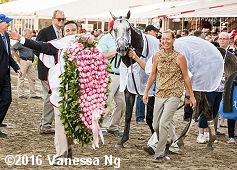 Left: Frosted in the winner's circle. Winning trainer Kiaran McLaughlin (far left) said, "It wasn't the plan to take the lead. We have a top rider and we let Joel [Rosario] kind of dictate what he wanted to do and figure it out when the gates open. He thought he would be further back if they went fast and close if they weren't going fast. He went fast and he was on the lead and I knew if he was there he would have plenty of horse. Everything worked out. I wasn't nervous about the fractions because I felt like Joel would have to have a lot of horse in order to do that."

Right: Frosted heads back to the barn after the race. Winning jockey Joel Rosario said, "He was cooking, you know. I know he probably went a little too fast - more than normal - but that race he ran the other day [the Met Mile] going a mile, I thought it might have him a little sharp. I was cruising the whole way, he was very relaxed and I just tried to save something for the end." 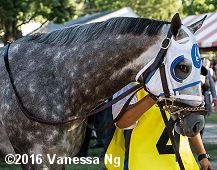 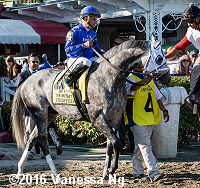 Left: Frosted in the paddock before the race. McLaughlin added, "He is just a really nice horse and has matured from three to four years old. American Pharoah is Lexington now and we don't have to chase him around anymore. Invasor was the best (horse I trained), I'll always say, but Frosted is creeping up now and if he can go on and win the Breeders' Cup or World Cup he'll be right there with Invasor or pass him. Woodward, Jockey Club Gold Cup, Breeders' Cup.  We'll just soak this up for now and figure it out."

Right: Frosted heads out for the post parade. Rosario added, Sometimes he's a little difficult and you have to let him do what he wants to do, but when I turned for home I knew he had something left because I know the way he likes to run. He pulled me [to the lead], so I didn't want to take him back because he was happy there. He was comfortable [despite the fast fractions] after I cleared the horses inside of me on the first turn, he was really happy and enjoying it." 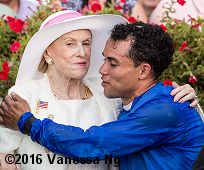 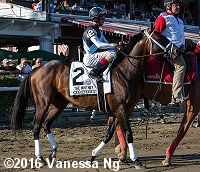 Right: Second place finisher Comfort heads out for the post parade. Trainer Todd Pletcher said, "I was encouraged when they threw up those kind of fractions, we kind of envisioned being maybe third or fourth and not going that quickly but I was happy he was that far back. I wasn't particularly happy at the way he got there. He got jostled around a lot leaving the gate, then he got jostled around in the first turn. It took him a little while to catch his rhythm, but once he did I thought he closed resolutely. It was a big effort from him. He's come a long way in a short period of time. It was a big step up for him and he ran very credible." 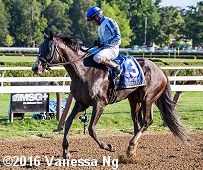 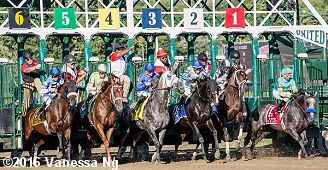 Left: Third place finisher Upstart returns after the race. Jockey Irad Ortiz Jr. said, "He ran a very good race. I got beat by the best horse in the race. Then I just got beat for second so overall I think he did very good."

Right: The horses break from the gate for the Whitney. Mike Smith aboard fourth place finisher Effinex (6) said, "I thought he ran well. It wasn't his best race. He was sliding around behind a lot out there. Very uncomfortable on both turns. When a horse is doing that, you have to wait on him. In the meantime, while I'm waiting for him to get lined out, Frosted is opening up 1, 2, 3 lengths on me and then I have to try and make it up. Frosted is a fantastic horse. And you can't do that and even have a remote shot at beating a horse like Frosted. You have to do everything right and more." 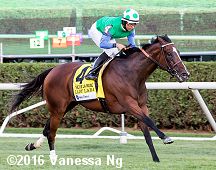 Closing out Saturday's card of racing, the $100,000 De La Rose Stakes featured a field of 9 older fillies and mares going 1 mile on the inner turf course. Roca Rojo, undefeated in 3 starts all in allowance company, was the 2-1 favorite over 3-1 Lady Lara, 4th in the Just a Game (G1), and 4-1 Zindaya, winner of the Intercontinental. Jockey Luis Saez sent 30-1 Mayla to the lead first time by and she set fractions of 25.37, 49.96, and 1:13.51 over the firm going while pressed by 10-1 Robillard and stalked by Lady Lara. Entering the stretch, Lady Lara came through along the hedge and held off late-running 6-1 Stormy Victoria for the 1 length win in 1:35.88. It was another length back to Zindaya third.
Results Chart 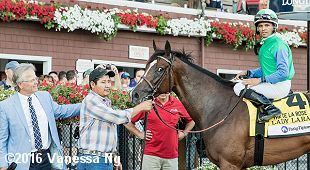 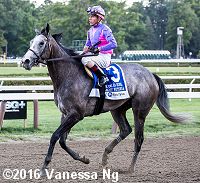 Left: Lady Lara in the winner's circle. Winning trainer Bill Mott said, "That's her last start and she ran well. She's in foal to Uncle Mo and the decision was if she was continuing to do well then we would keep her racing. If things weren't going right, obviously, we wouldn't have run her. She actually has really blossomed since she's become pregnant. She started working faster and become stronger. It worked out well with her; I'm sure maybe it's not for all of them." Jockey Jose Lezcano added, "She broke very good and gave me a good position without asking. She had a very good trip the whole way around. When I asked her, she responded for me. I wanted to stay behind and wait and see what happened. I came along the inside." 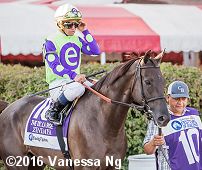 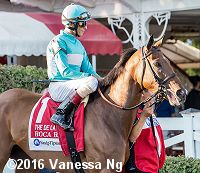 Left: Third place finisher Zindaya heads out to the track before the race. The Chad Brown trainee improved her record to 5 wins, 3 seconds, and 3 thirds in 13 starts, earning $401,240 for owners e-Five Racing Thoroughbreds.

Right: Fourth place finisher and beaten favorite Roca Rojo heads out to the track. The Chad Brown trainee has a record of 3 wins, 0 seconds and 0 thirds in 4 starts, earning $74,262 for owners Sheep Pond Partners, Newport Stables, and Bradley Thoroughbreds. 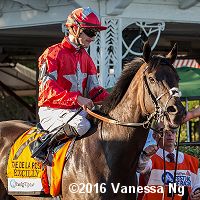 Julien Leparoux aboard eventual 7th place finisher Excilly before the race. During the stretch run, the saddle slipped on Excilly as jockey Julien Leparoux was attempting a rally on the outside. However, after the finish Leparoux was unseated and fell to the turf, suffering a non-displaced fracture in the left wrist. He is expected to be out of action for 4 weeks, most likely including for Tepin's expected start in the Ballston Spa (G2) on Travers day.

Also on the card: The Test, Waya Stakes, and Lure Stakes